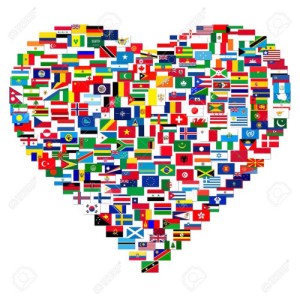 I would like to share some of my varied experiences as an American traveling aboard European ships. 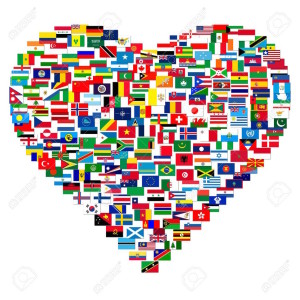 When cruising European waters, Americans can choose a small oceangoing ship or riverboat that caters primarily to them, completely so if it’s a charter, or select one where they may well be in the minority amongst Europeans.

There are pros and cons to making this third choice, and on recent cruises, the experiences varied widely, but for the most part, I found them to be positive and culturally rewarding.

At the outset, I should add that I lived in London and Paris during my now distant graduate school days, and with annual European trips since them, I qualify as an ardent Europhile.

Winston Churchill, who had trans-Atlantic parents, once said that Britons and Americans were divided by a common language and that is not all. One can encounter considerable cultural differences, especially for Americans traveling on British ships.

In my case, they were aboard Swan Hellenic’s Minerva and Hebridean Island Cruises’ tiny Hebridean Princess.

The smaller the ship the more likely British passengers will consider it Union Jack territory, and the Americans who come aboard are overseas guests. That puts you into a secondary position.

While American television and its powerful cultural impact are known in nearly every British household, there are many levels of reaction to this, some positive and some negative.

Generally, those who have traveled to the U.S.A. like most of what we represent, and those who haven’t may sometimes resent or dislike it. That’s understandable if they have not directly experienced our ways.

We tend to be fairly open and full of questions when traveling, and many Americans admire British ways, but reactions by the British to have an American in their midst varies from an open welcome, to being reserved or even mildly hostile, at least initially. 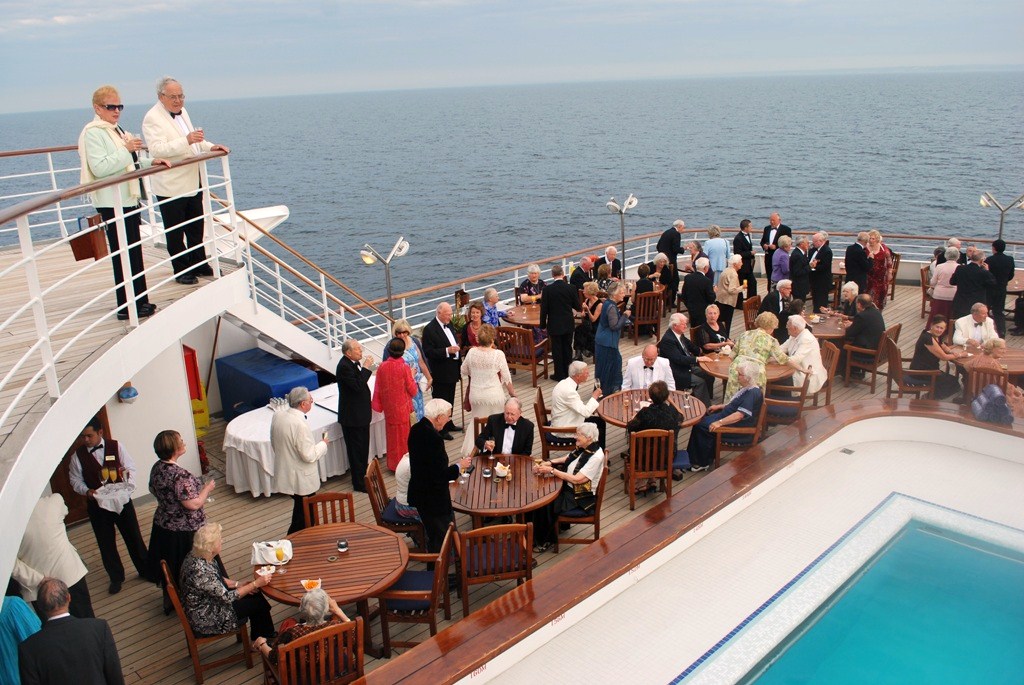 Cocktail parties that allow you to move about are ideal for meeting other people. * Photo: Ted Scull

My wife and I have traveled on Swan Hellenic’s Minerva several times, and on one occasion we ran into four well-traveled American women of our parents’ generation that I had known since childhood.

When we joined them for drinks before dinner, great laughter ensued, and the British around us looked on very disapprovingly, and one could feel the tension. Maybe we were having a better time than they were. But all that passed as we got to know one another.

Americans are in the habit of asking the newly encountered, “Where are you from, and even perhaps what do you do?” Or, this alternate approach. “We are from New York, and where are you from?”

The British don’t much care for that style of personal questioning, but on the Minerva, they feel quite comfortable asking something equally incisive, “Have you traveled with Swan before?” I like answering, “Yes, several times.”

We were then accepted almost as equals and as Anglophiles.

The floating Scottish country house hotel, known as the Hebridean Princess, works best when there are only two and three American couples in the passenger list, keeping the balance in Favor of the locals. The statement is a paraphrase of what some passengers and the previous owners have said to me, and I would agree. 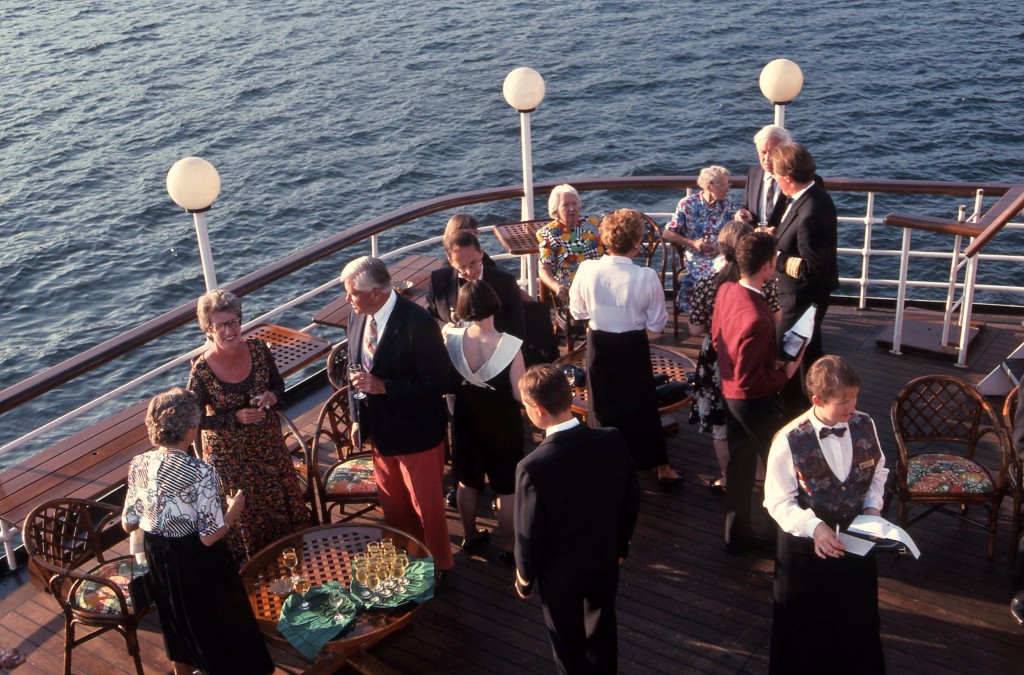 On our two cruises, we (an American-Australian couple) gradually became subjects of curiosity in the intimate setting of the forward lounge with its brick and timber fireplace. It is amazing how much more permissible lively conversation can be after the meal and a little wine. On the third night of our first cruise, an Englishman, seated with a small group, asked, “Where do you two come from?” We then knew we were accepted and our social milieu expanded from that moment on.

A good topic of discussion is British English vs. American English, and as with most nationalities, the young are more accepting of American culture and phrasing than their parents. 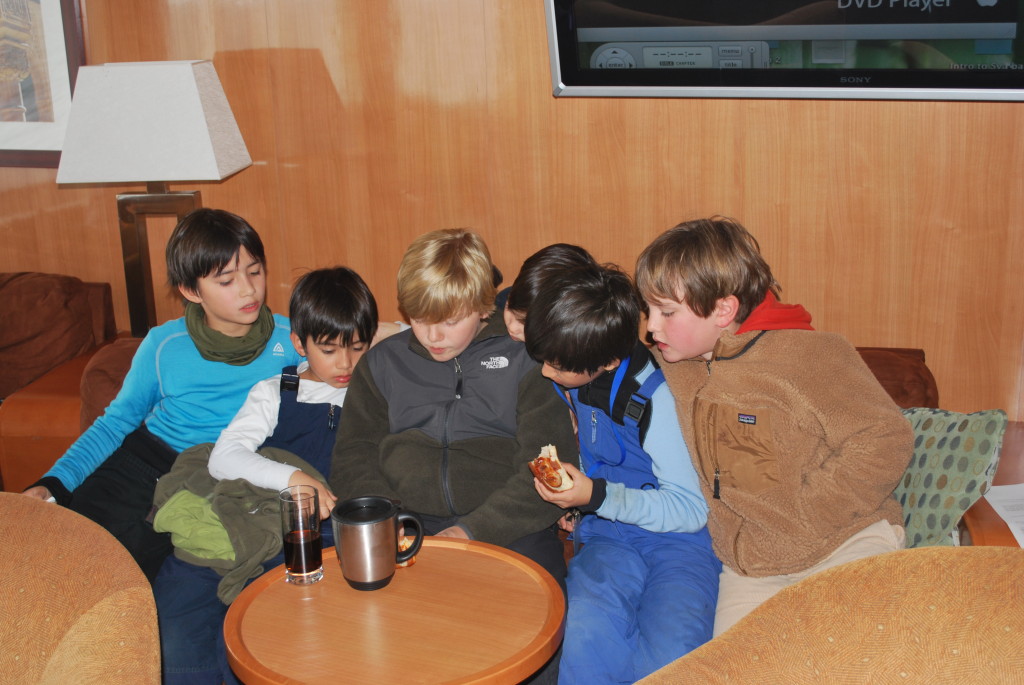 When kids have a strong focus they can easily mix with each other. * Photo: Ted Scull

Scandinavian ships pose very few language problems, and aboard the Hurtigruten’s popular Norwegian coastal voyages, the lounges and open decks are conducive to mixing, using the splendid scenery as the initial shared focus. 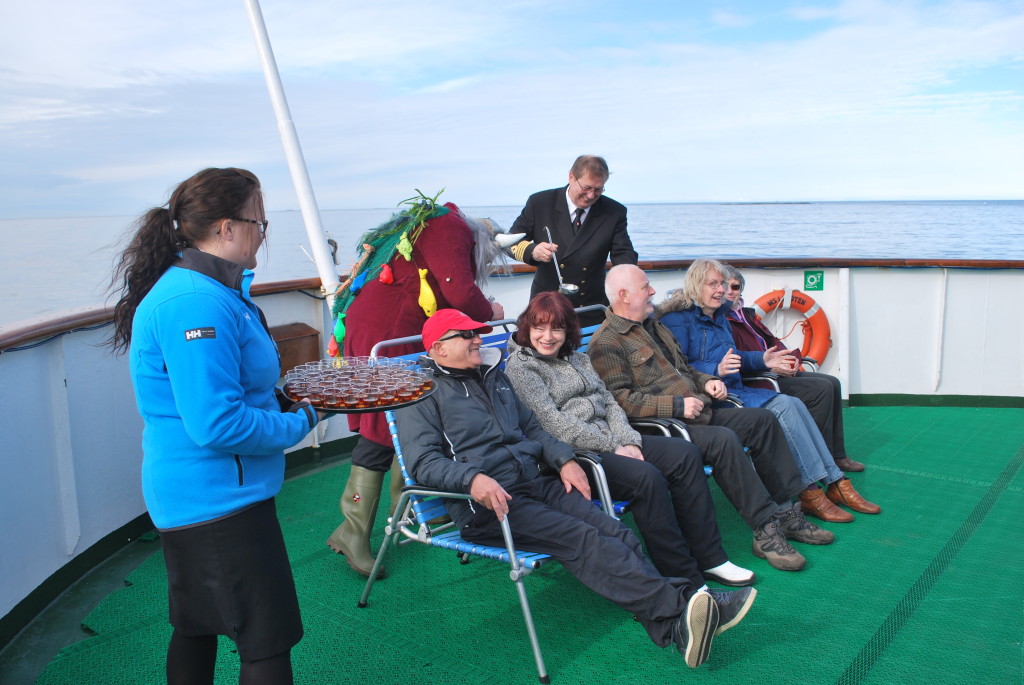 A shared event like crossing the Arctic Circle is an icebreaker (literally). * Photo: TedScull

Most Scandinavians have a positive attitude towards Americans, and it may help that often they have relations in the US. Also many speak very good English.

Large numbers of Germans on any ship, be they aboard the Hurtigruten ships or some European riverboats, have a considerable effect on the atmosphere and demonstrate significant cultural differences.

In my half-dozen experiences, where they were aboard in large numbers, they tended to be indifferent to meeting other nationalities, notwithstanding a language problem for some. A few may be more open, but Americans tend to break the ice.

One characteristic has become a cliché, but it should be added that Germans do not have an exclusive on this practice.

Coming from a relatively cold and cloudy country, Germans take to the sun when they have the opportunity to go aboard, and they often snap up the deck chairs early, and if they can get away with it, save them for the entire day with books and towels. Also, Germans tend not to queue up the way Brits and most Americans do. That can cause friction.

Once, a cruise aboard a riverboat on the Rhine and Moselle was a thoroughly Germanic experience. We were a dozen Americans amongst a nearly all German passenger list, and fully half made no attempt at eye contact or greeting when meeting on the stairs, in the corridor or on deck.

They might or might not respond if you spoke first, more likely if you used a simple German greeting such as “gute morgan” (good morning).

I chose this particular cruise to get to know Germany better, so I made an extra effort to meet the locals, and it was tough sledding for the first few days, but those who finally did respond were pleased to share knowledge of their country.

Dining demonstrated another big cultural difference, and as the ship was geared to Germans, it served an elaborate multi-course sit-down meal at lunch, while Americans tend to eat lightly at midday. The buffet selections were pretty meager, but when you ordered just one or two menu items, you waited patiently until it was time for that course to be served, while the others went right through the menu. 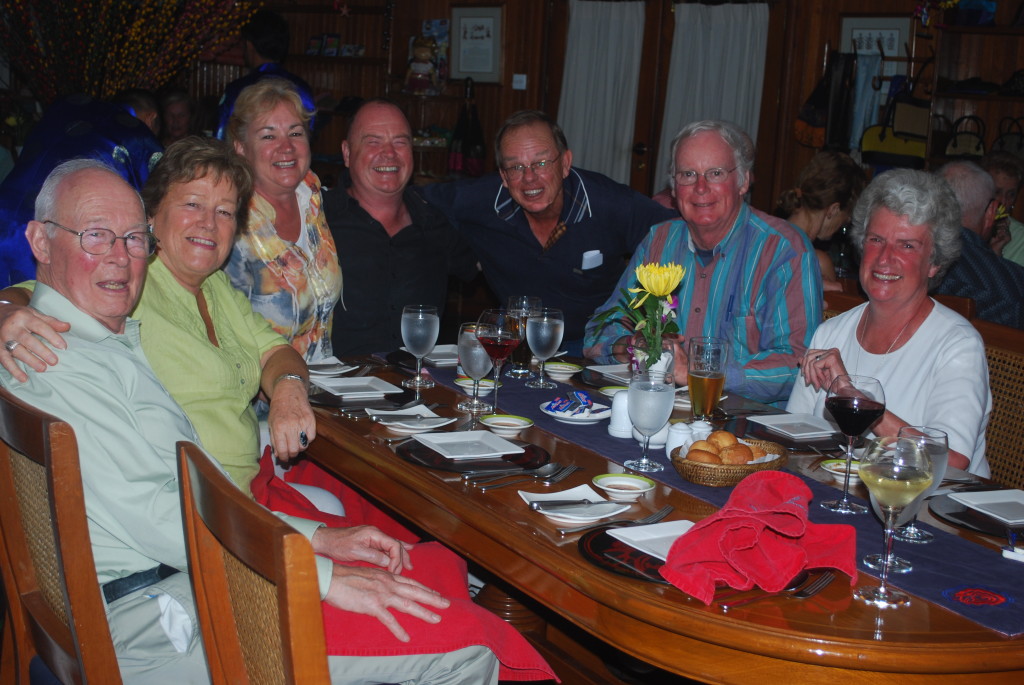 Meals, however, can also be an easy way to mix Germans, English, Australians, and Americans. * Photo: Ted Scull

Smoking on any ship where lots of Europeans are present will pose problems for some Americans, and with the practice so much more widespread, Europeans do not always pay heed to designated smoking and non-smoking areas.

As a non-smoker, I try not to let it bother me and concentrate on the overall travel experience, while on this side of the pond, I will be among first to speak up if the rule is broken.

Mediterranean cruises aboard two large Costa ships were perhaps the most intense blend of many European nationalities and English speakers. It also meant announcements were given in five languages — French, German, Italian, Spanish and English. By the time the cruise director got to English, everyone else had resumed their normal conversations.

My wife and I did feel isolated at times as we were in a tiny minority, but it’s not a bad thing to sit back and observe, and then choose the right moment to strike up a conversation with a foreigner to see if we have a common language. But masses of people representing different nationalities is not my cup of tea, as they tend to remain apart, while on small ships the different nationalities can blend more easily and often quickly find a common second language. Europeans are more likely to speak English than Americans are to have a facility in a second language with which they are comfortable.

Europeans may enjoy using their English, and then all sorts of doors of communication open.

That’s foreign travel at its best. 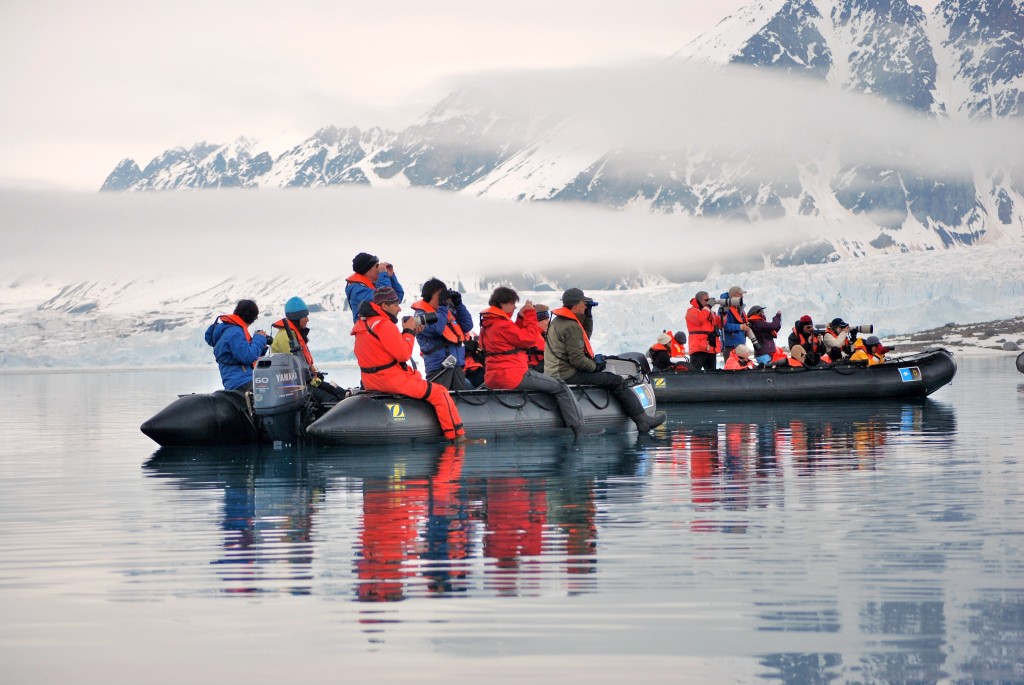 After all, we are all in the same boat, or here, boats.
* Photo: ted Scull