NOV 17 UPDATE: SeaDream Yacht Club ended up canceling sailings for the remainder of 2020 after COVID-19 cases climbed to nine, including two crew.

The first Caribbean cruise since the pandemic shutdown in March ended abruptly with COVID-19 cases.

Seven passengers among the 53 aboard SeaDream I’s Nov. 7 voyage from Barbados had tested positive as of Nov. 13. Everyone else, including the 66 crew, was negative.

After a traveler who didn’t feel well a few days into the voyage tested positive, everyone was confined to their rooms and the yacht turned back to Bridgetown. Subsequent testing found four other people in that traveler’s family group as well as a married couple had also contracted the virus. 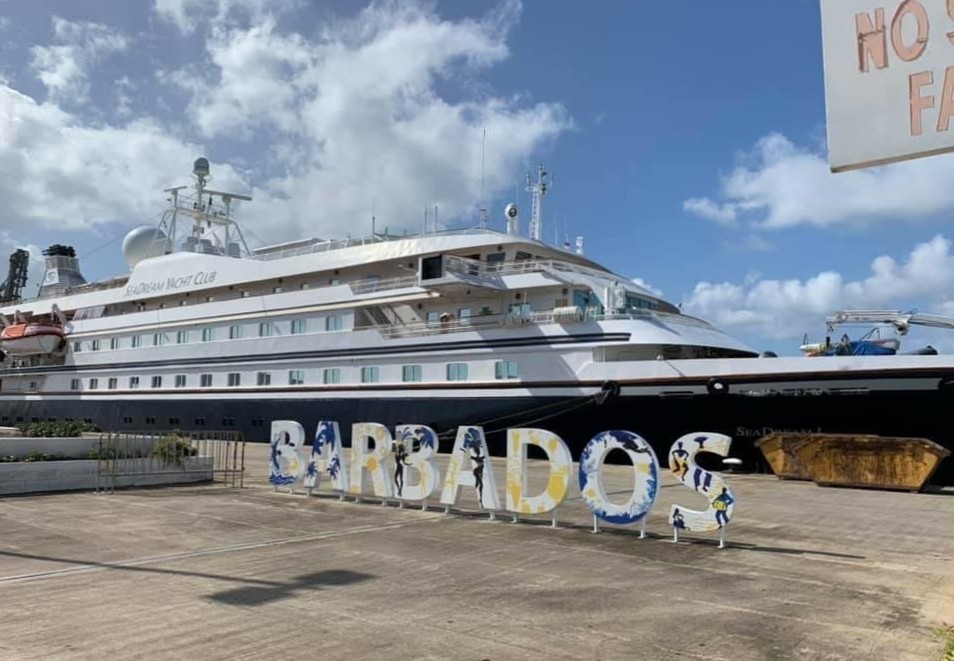 SeaDream I alongside at Bridgetown, Barbados. * Photo: @SeaDreamYC

So Much For Small-Ship Hopes

It was sad news all around, including for SeaDream Yacht Club and small-ship fans who had hoped COVID would be less of a risk in a vessel carrying fewer people.

The 112-passenger SeaDream I went out at less than half capacity. And SeaDream — which was the first line to restart international cruises last June and had sailed its twin yachts between Norway and Denmark all summer without incident — had taken even more precautions for the Caribbean. 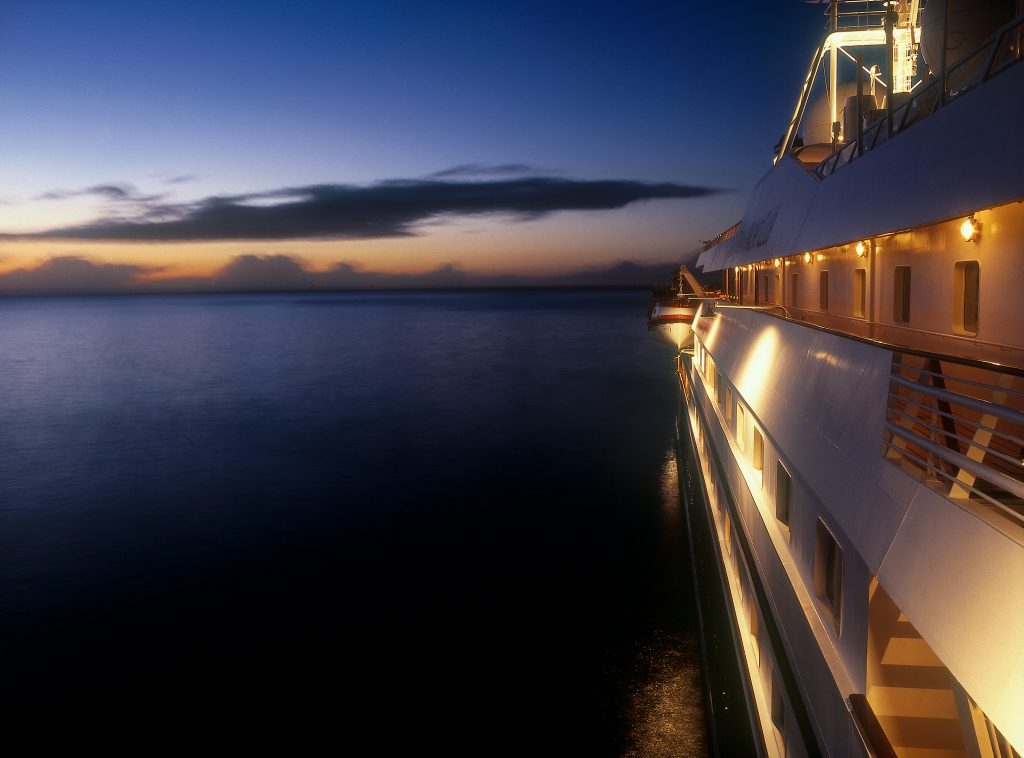 Sad news for SeaDream and travelers who hoped COVID would be less of a threat on a small ship. * Photo: SeaDream Yacht Club

The company scrapped its original U.S. Virgin Islands program in favor of a new round-trip Barbados itinerary featuring less-visited places in Grenada and St. Vincent and the Grenadines. Shore tours were designed to operate in a “bubble,” not visiting populated places or interacting with locals.

In line with Barbados regulations, SeaDream had required a negative PCR laboratory-processed test within three days of travel and retested everyone at the pier with an Abbot “ID Now” fast PCR test prior to embarkation. Passengers were to be tested again four days into the cruise. Luggage, hand-carry items and shoes were sanitized before boarding. There were daily temperature checks, and reminders about social distancing.

Also, SeaDream I is the first cruise ship to employ a $100,000 Altapure AP-4 device for hospital-grade disinfection of air and surfaces. (This works one room at a time and supplements daily sanitization.) 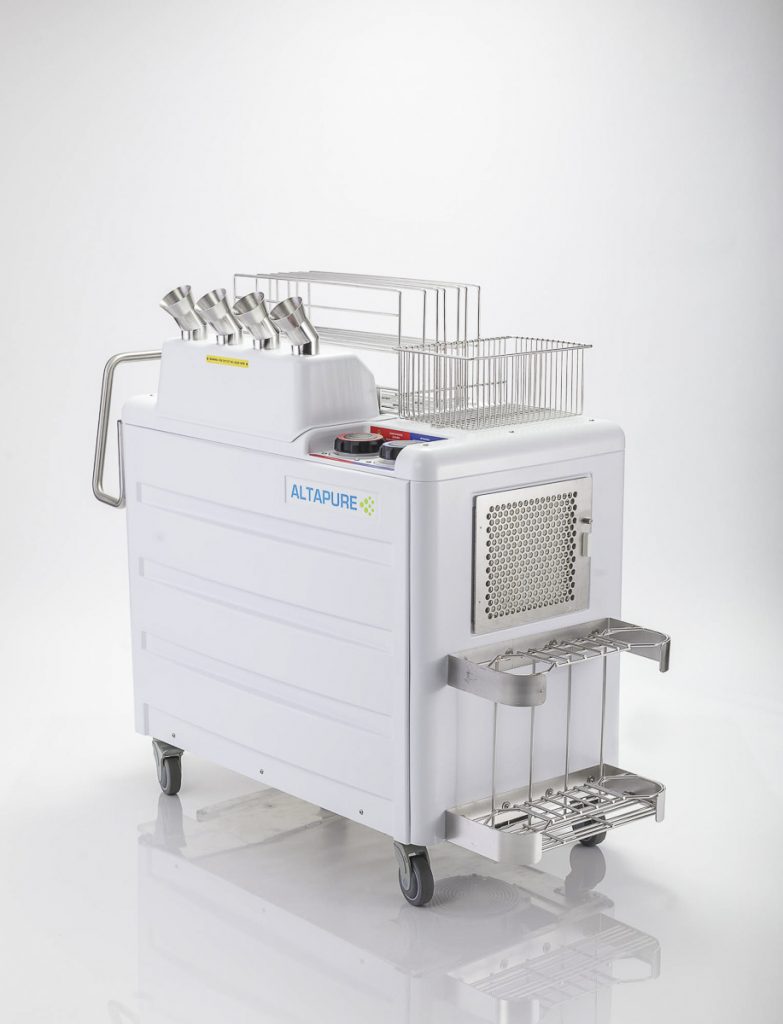 Masks, though, were not initially mandated. SeaDream hadn’t required masks in Europe, either.

In September, when the line held a webinar to discuss its Caribbean plans, Sudesh Kishore, senior vice president of hotel operations, said:

“We do not want people to be wearing masks. That’s why you get tested before. We want you to enjoy the SeaDream experience.”

When a passenger on the webinar questioned that, Executive Vice President Andreas Brynestad said SeaDream would listen to guest feedback so the mask policy may be subject to change. The yacht would have masks available, he added.

QuirkyCruise contributor Gene Sloan of The Points Guy, who was traveling on the aborted SeaDream I cruise, reported that crew weren’t wearing masks when he embarked, nor had a single one of the 53 passengers chosen to do so. But two nights in, things changed. Travelers were told to mask up while moving around the ship, with crew wearing them at all times.

According to Sloan, that made many passengers angry, and one person even blew up at him, suggesting the line had changed its policy due to his presence on board. “A SeaDream representative told me that was not the case,” Sloan wrote.

“Quite a few passengers … said they wouldn’t have taken the trip if they had known a mask-wearing requirement was coming.”

Related: QC Contributor Gene Sloan was aboard the cruise and wrote about it for ThePointsGuy, where he is a senior reporter. 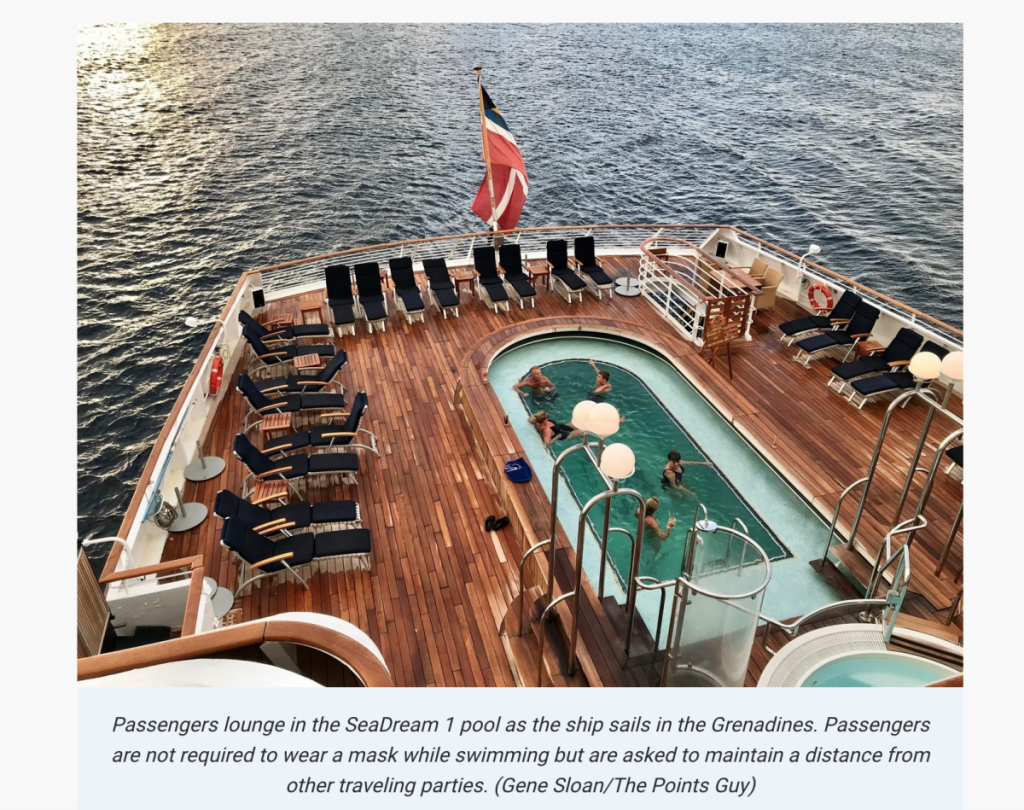 A screen grab from Gene’s first SeaDream report for TPG, before the COVID cases were disclosed.

Subsequently, Sloan reported that one of the people with coronavirus was taken to a shoreside medical facility for “observation;” the others were showing only “light symptoms.”

On Nov. 13, he said the captain had informed them that Barbados authorities would allow passengers who’d repeatedly tested negative in recent days to fly home.

Earlier, SeaDream I’s Nov. 14 cruise had been canceled. SeaDream Yacht Club has not responded to several sets of emailed questions.

The incident played out in national media, with Sloan appearing as a guest on several news shows. 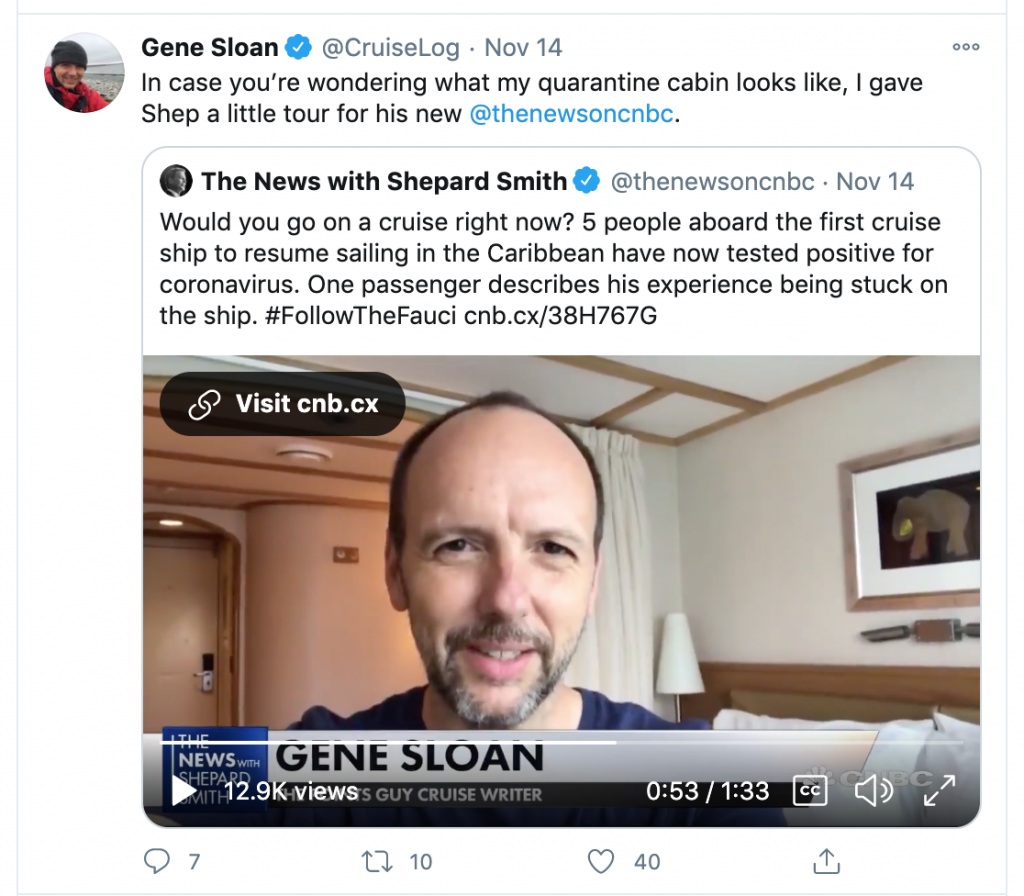 A Twitter screen grab of Gene’s interview with Shepard Smith of @CNBC.

As with the mask discussion, people are taking sides in social media, some blaming SeaDream for “hurting the entire industry” and causing a setback just as U.S.-based lines are working toward complying with the Centers for Disease Control and Prevention’s complex framework for the conditional resumption of cruising.

Others argue there’s a distinction between a yacht and a cruise ship.

When asked about the matter during a webinar for Signature Travel Network, Richard Fain, chairman and CEO of Royal Caribbean Group, did not pile on SeaDream. Instead, he made the point that COVID can’t be eliminated in society; the objective is to reduce the risk of getting it on a ship to less than the risk of being on main street at home.

Fain said the experience from months of cruises in Europe by SeaDream and other lines shows it is possible to contain coronavirus at sea.

“So I would look at the few instances we’ve had of cases as success stories. We are able to deal with these things, isolated cases, in an isolated way. That’s the objective.”

He went on to call the SeaDream situation an opportunity to learn “and make us so much better as an industry.

” … The coincidence of it being the first Caribbean cruise and the coincidence of having press on board notwithstanding, isolated incidences which are handled well are proof that the system works — not that there’s a problem,” Fain concluded.

Writing in Cruise Week, a publication for travel advisors, Mike Driscoll said: “Already the news of SeaDream I is fading in the media spotlight. While never the top story, it did make a solid appearance across all news media when the first positive test came out.”

He noted that coronavirus is so ever-present right now that “COVID problems among a handful of people on a cruise out of Barbados is likely to be just a flicker in the minds of media-saturated Americans … Its presence is muted by other developments. This is not March.”

That said, Driscoll added: “A sailing carrying American passengers out of Barbados in November, given the high number of coronavirus cases currently in the U.S., is simply not the same as a sailing in August on board a ship out of Norway carrying mainly Norwegian and Danish passengers. Those countries at that time had next-to-zero coronavirus cases, and there was never an issue of flying passengers to and from other countries.”

Not requiring masks is different from what the mainstream cruise industry has been doing and plans to do when ships resume sailing from the U.S.

Driscoll said that SeaDream not following science and bowing to the wishes of its customers to shun masks has “perhaps affected the industry and perhaps infected passengers.”

Two members of Congress asked the Centers for Disease Control and Prevention to reinstate the no-sail order for cruise ships and reverse course on efforts to resume cruise operations.

Rep. Doris Matsui of California and Sen. Richard Blumenthal of Connecticut, both Democrats, cited the SeaDream I matter in a letter to CDC Director Dr. Robert Redfield. 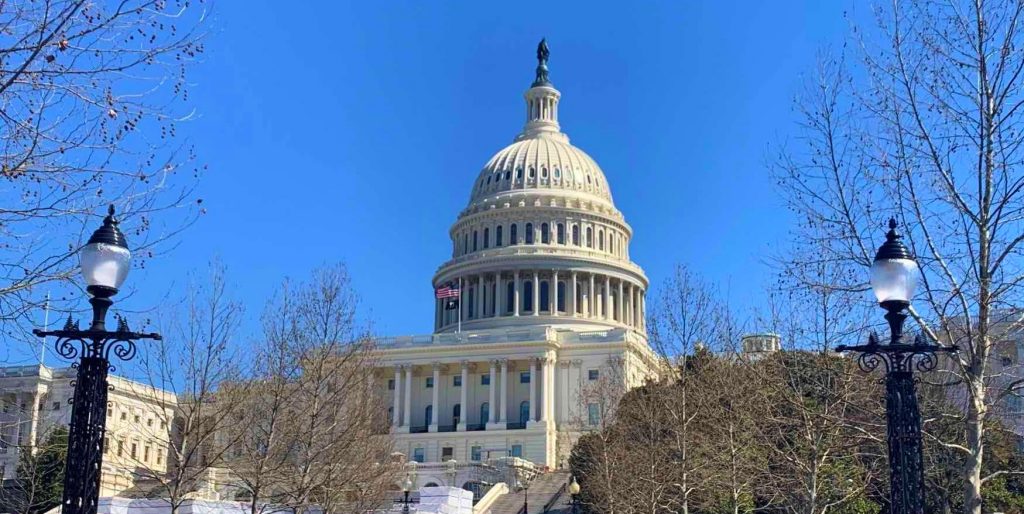 Citing the SeaDream incident, two members of Congress are now calling for the U.S. to reverse course on restarting cruises. * Photo: Anne Kalosh

“We feel strongly that you should reverse course on the recent decision … to take a phased approach to restarting cruise line operations in the United States,” Matsui and Blumenthal wrote. “Instead, we implore you to extend the prior no-sail order until a time when the health and safety of passengers and crew can be assured.”

The letter noted SeaDream passengers and staff underwent “rigorous testing” prior to embarking and the company “took additional steps to increase safety such as social distancing, mask requirements and strict hygiene protocols.

“Despite these efforts and good intentions, the virus was still able to infect multiple people … Unfortunately, this troubling development is not surprising and reaffirms the need to exercise extreme caution before sending passengers and crew back out to sea on cruises.”

Matsui and Blumenthal emphasized the risks are especially high given current skyrocketing COVID-19 cases, writing: “[I]t is unconscionable for the CDC to move forward on a plan to resume operations given the ongoing risks. While we appreciate the difficult economic situation cruise line operators face and the desire of many cruising enthusiasts to restore a sense of normalcy, the CDC must always put health and safety first to prevent further spread of this deadly virus and save lives.” 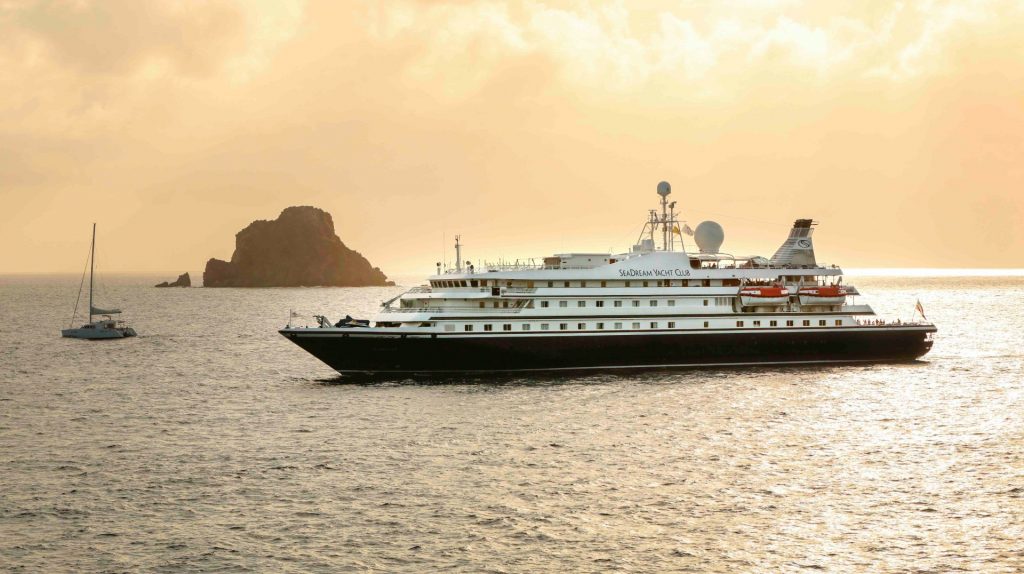