By Heidi Sarna & the Quirky Crew.

2020 hasn’t been easy for anyone. As travel writers typically out exploring the world on small-ship cruises, we’ve been beached; collectively washed up and waiting for the tide to turn and travel to be safe again. We had big exciting plans for 2020 that weren’t meant to be as COVID shut down travel.

So, while we long for future days when “normal” travel eventually resumes, we are left with our thoughts and dreams to sustain us — of past trips, trips planned and canceled, and future adventures to come.

What my wife and I lost this year due to the pandemic are the myriad European travel options we like to consider before I take up my two annual contracts to lecture aboard the Queen Mary 2 on westbound crossings back to New York where we reside.

In 2020, we had planned to do a small-ship cruise amongst the Outer Hebrides or the Shetlands and Orkneys to the north of Scotland. The latter two island groups are scattered and remote enough that a cruise is a most sensible way to get about. 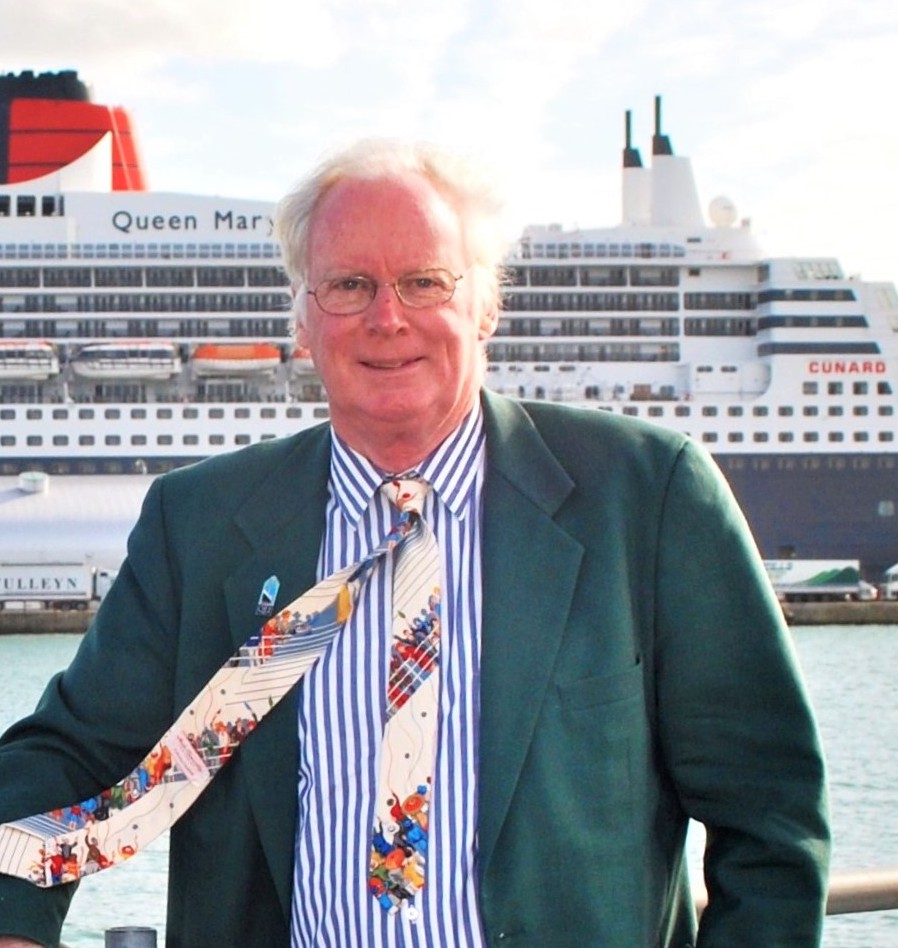 Ted before the Queen Mary 2 at Southampton.

I had several travel adventures planned for 2020 that were scuttled thanks to COVID. One of the quirkiest to be canceled was a small-ship cruise on the River Kwai in Thailand aboard the 20-passenger River Kwai (a classic boat built by Pandaw, one of my favorite small-ship companies) that included lots of cycling. It was being offered by Grasshopper Adventures.

I was so looking forward to it. I live in Singapore, and this would have been a lovely short break, just a two-hour flight from home to Bangkok, where we would have spent the night, then a few hour’s drive the next morning to board the boat for three nights on the River Kwai, to explore rural Thailand as well as WWII sites related to the Thai-Burma railway built by POWs. This was truly a quirky trip ticking both my fave travel boxes — small-ship cruising and cycling. Hopefully I can reschedule for late 2021 or early 2022.

Heidi (left) & her friend in Vietnam, on a Pandaw cruise excursion.

I sadly missed reporting on the (canceled) naming festivities and inaugural sailings for two small ships, paddle-wheeler American Countess in New Orleans, a favorite city, and river vessel AmaSiena in Europe, with a cruise from Nuremberg to Luxembourg, two places I’ve never been. Both would have been wonderful family affairs, with American Queen Steamboat Co. founder John Waggoner’s daughter Angie Hack serving as the godmother for American Countess, a boat I saw being built at Gulf Island Shipyard in Houma, Louisiana, so I feel a special connection. And, at AmaWaterways, with husband and wife co-founders Rudi Schreiner and Kristin Karst at the helm, the festivities are always intimate and meaningful. World Travel Holdings’ Debbie Fiorino was booked as AmaSiena’s godmother.

Anne, in hat, enjoying an ox cart ride through the Cambodian countryside with other AmaDara passengers in 2018.

The best cruise I didn’t do was one of now defunct CMV ASTORIA’s final cruises out of the UK, which I was lined up to be a guest lecturer for.

However, my best and only cruise in 2020 was a spectacular Sea of Cortez trip on ASTORIA, which ended up being her penultimate (second last). It was a 12-night trip from Puerto Penasco, Mexico. Such a lovely old ship, great staff, surprisingly good food and interesting itinerary.

Peter Knego in front of the Astoria.

The cruise I’m most sorry to have missed in the past year was our trip to the Galapagos with Silversea. I would have traveled with family and was looking forward to a wonderful adventure at this magical destination. Alas, we will have to try again when it is safe.

I was just days away from heading to Norway in March for the very first sailing of Lindblad’s new, 126-passenger National Geographic Endurance when the new coronavirus brought cruising to a halt. I’ve had a lot of cruises canceled over the past 10 months, but that’s the one that I regret missing the most. There’s never been anything quite like National Geographic Endurance. Billed as the world’s most advanced polar expedition ship, it was built super tough for the most off-the-beaten-path (and quirky!) exploring — including voyages to the far reaches of the Arctic and Antarctica. At the time of its completion, it had the highest ice class rating (PC5 Category A) ever for a purpose-built passenger ship. It also has an unusual, sloping “X-bow” designed to minimize movement in the roughest of seas (such as in the Drake Passage on the way to Antarctica).

The 2020 cruise I most missed taking was aboard Hurtigruten’s Lofoten. I was booked on the last sailing of the Lofoten and was supposed to have boarded last week in Kirkenes!!

Ben and his wife soaking up the good life on an UnCruise small-ship adventure in Alaska.

For me, it was a European Waterways barge cruise along Canal du Midi. This is an adventure along France’s most famous canal that I’ve always wanted to undertake. I’m a huge fan of European Waterways too — you can read my review of their glorious Scottish trip here. What made this French voyage even more special is that sharing this extravaganza of fine wine, cuisine and cheese would have been my wife — sans kids! We have rebooked for late this spring, fingers and toes crossed…

While 2020 has been challenging in so many ways, and I had a full calendar of eclectic cruises all booked, I was particularly bummed when my off-the-beaten-path Pandaw Cruise on a Voyage to Nagaland, in India, famous for the distinctive and colourful Naga worriers and many ethnic communities, was cancelled.  As a connoisseur of small-ship adventurous travel, journeying up the Chindwin River aboard the Zawgi Pandaw beyond Homalin to Nagaland was a life dream.

My other great pandemic disappointment was the cancellation by UnCruise Adventures of my cruise aboard the Safari Explorer in Costa Rica and Panama. I intended to kayak, skiff, snorkel, and bushwhack in the tropics. Another highlight was transiting the Panama Canal on a small ship. I had hotels and tours booked in Panama City and San Jose before and after the cruise as well.

For 2021, my fingers are crossed that I will be able to do the Laos Mekong adventure with Pandaw Cruises that is already booked, an Uncruise adventure in Panama and Costa Rica, a river cruise with Viking Cruises and either an Arctic or Antarctic adventure on a small ship. I know it’s a long list, but I have some serious catching up to do! 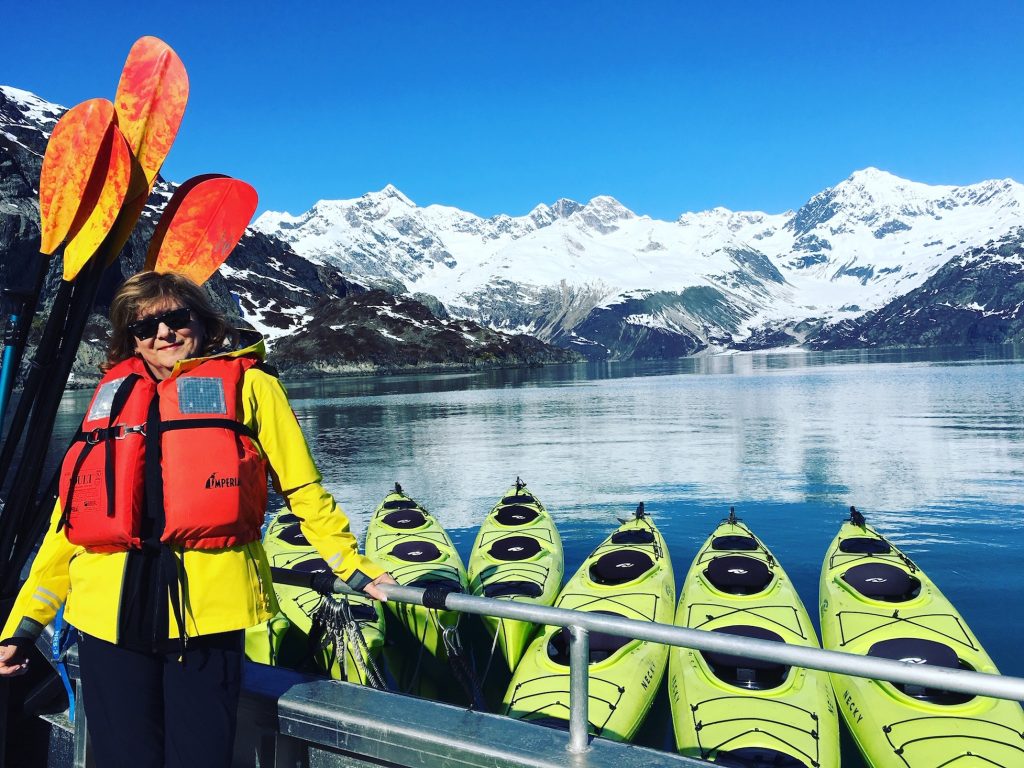 2020 was obviously filled with disappointments, including lots of planned cruise travel. For us, the best cruises we didn’t take this year were a “Historic Treasures of the East Coast” from Charleston, SC to Canada’s Halifax, Nova Scotia with Pearl Seas and, the epic landscapes and natural wonders of an Iceland circumnavigation with Iceland ProCruises. However, we have our sights on a quirky cruising new year and look forward to setting sail again in 2021.

Cele & Lyn kayaking a few years ago amongst the glaciers of Ford’s Terror, Endicott Arm, Alaska.

The best cruise I didn’t take in 2020 would have been one on Island Windjammers’ small ships in the Caribbean. Soft sea breezes, rolling ocean waves, no shoes, or schedule required, this laid-back vibe is the perfect recipe for the relaxing vacation I crave. Island Girls, you are calling my name…

Elysa on a past Island Windjammer cruise.

2020 was going to my year of new adventure when I found out we would be leading a group on a cruise around South America to experience a total Solar Eclipse in December. Queue tear streaming down my cheek. …Fortunately, a great man (aka my father) once told me: “Elise, sometimes you just need to put things in your rearview mirror.” I am going to head his advice and bid 2020 “good riddance.” I can’t wait to get back to work as soon as groups are ready for cruise travel again. But until that day manifests itself, Tim and I are hitting the open road in a 15-year-old RV. Tim will serve as the captain and chief engineer, while I have signed on as the executive chef and chief housekeeper. We will be land cruising quirky-style, fully self-contained and in a safe and responsible manner.