For a summer trip, my wife and I hunted for a cruise that would be a complete change of pace, one well removed from mega ships and milling crowds.

After a thorough search using brochures that came in the mail and website links, we chose one that puttered no further than along the highly indented coast of Maine.

Even more focused, the itinerary concentrated on the state’s Penobscot Region with a diversion east to the popular cruise port at Bar Harbor on Mt. Desert Island.

Our embarkation point was a park-side landing along the Penobscot River at Bangor, an old lumber town with early 20th-century steamboat connections to Portland and Boston.

Here, I will concentrate on the itinerary we enjoyed that American Cruise Lines offers every year, but with tweaks and boarding now often at Portland, Maine. 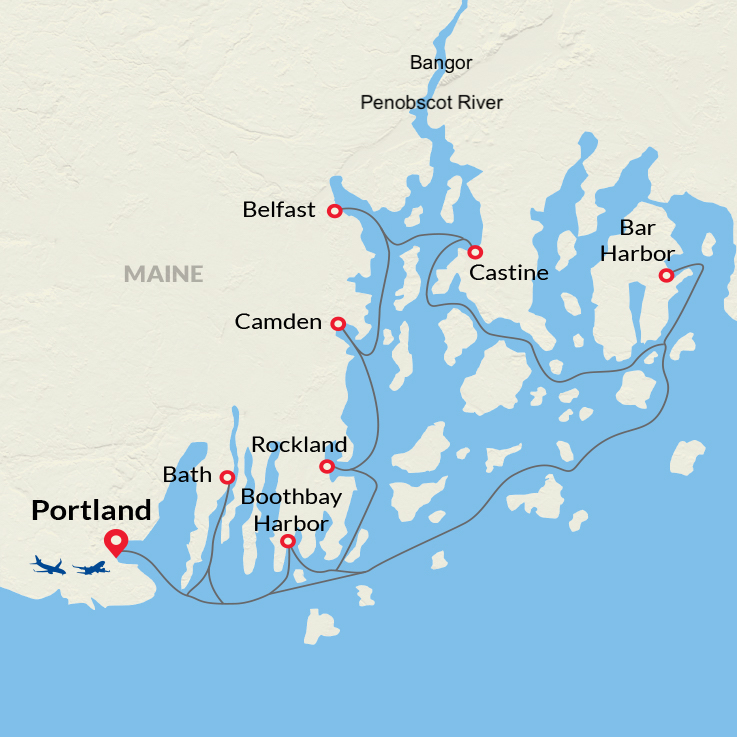 With all passengers aboard, we sailed at midday down the fast-flowing Penobscot River. White-water rapids appeared at the sweeping river bends and soon the post-industrial landscape gave way to the Maine woods punctuated by an occasional house or camp.

Three hours later the captain, a born and bred Down-easter, eased past moored sailboats to tie up to the Bucksport landing. The setting was lovely, a small clapboard New England town flanked by two highway bridges and a large granite fort built to protect the once important wooden shipbuilding industry. The lumber was prepared in Bangor and rafted down the Penobscot.

One of two bridges over the Penobscot River, replacing a previous one that replaced a ferry. * Photo: Ted Scull

The Other Fort Knox

We boarded a bus for the short two-bridge drive to the far river bank for a visit Fort Knox. It was named like the more famous Fort Knox in Tennessee after Henry Knox, the first Secretary of War.

Constructed in the mid-nineteenth century as a so-called Third System Fort and similar to several others on down the East Coast, this coastal defense was never actually finished as our former enemies no longer posed a threat. A National Parks Service guide showed us what would have been the dark and dank multi-tiered bunk quarters for the rank-and-file soldiers and the more sophisticated design afforded the officers.

The longest water passage took us well east of Penobscot Bay to Frenchman Bay and one of the country’s earliest summer resorts, Bar Harbor. My wife and I enjoyed sitting outside on the top deck, some of it under cover, as we gingerly picked our way between lobster buoy markers and rocky islands.

Our historian told us that the Maine lobster is a cannibal, so every pot must be regularly raised to collect those that found their way into the traps and, most importantly, before they devour a cellmate.

The battle begins at a restaurant on the shores pf Penobscot Bay. * Photo: Suellyn Scull

Mt. Desert Island soon loomed as the most impressive feature, and in the center, Cadillac Mountain rises higher than any other point along the East Coast all the way south to Key West.

Approaching the landing several hours before the dock master expected us, two vessels needed to be moved just a few feet to make room. Our enviable position was alongside the town green, and near to the tourist information center and the main street leading up the hill and beyond.

A large cruise ship was at anchor, and her passengers had to wait their turn to shuttle in on tenders, while we simply walked ashore.

First calling in at the tourist office, we outlined our free time that would follow the organized excursion up through Acadia National Park to Cadillac Mountain for its 360-degree view of the Maine coast, interior mountain ranges and far out to sea.

As it was low tide, nearby Bar Island is accessible, and with the rising tide times written down to avoid being stranded, we passed along a street lined with turn-of-the-last-century stone, wood and brick summer houses to Bridge Street and turned right.

The sandbar forms the bridge and once across, marked paths led up into the woods then more or less left us to our own devices. It was easy to get disoriented, but not for long, as eventually we came to a cliff edge or a high vantage point for reorientation. On the way back to the mainland, the sandbar was already beginning to narrow with the rising tide.

While Bar Harbor is extremely touristy during the day, it quiets down at night as most visitors leave town. A footpath runs along the coast and makes for an evening stroll eyeing the boats at anchor and the houses and inns facing the water.

After a 24-hour call, we set sail for Castine, the most enchanting town of all, where the national flag of the occupying country changed no less than 14 times, between the English, Dutch, French, Canadians and Americans.

For 200 years, Castine was the most fought over place in the world, and prior to the American Civil War, qualified as the second wealthiest community in the U.S. — after New Bedford — based on whale oil and cheap salt for preserving fish.

Castine is now a quiet, non-commercial, yet upscale summer community of beautiful historic homes. By September, the Maine Maritime Academy is in back in session to train officers for the merchant marine and related maritime industry jobs. Its training ship, the State of Maine, converted from a deep-sea cargo ship, dominates the waterfront.

On Down the Coast

Onto Rockland, and unlike most of Maine’s coastal towns, it is a genuine commercial port with a sizeable fishing industry, docks for limestone export, and the principal terminal for the State of Maine ferry fleet serving the out islands.

In the summer, Maine windjammer cruises are popular one-day to one-week options, and several are based here and at nearby Rockport and Camden.

Next to our landing, we visited the Maine Lighthouse Museum with its superb collection of Fresnel lenses that gave the lights their distinctive long-range beams. The Maine Coast is littered with beacons, though all are unmanned now, so it is of interest to learn about the past and the keeper’s often remote lifestyle, and in some cases, raising families in partial or total isolation.

The town’s main attraction is the Farnsworth Art Museum, a complex made up of a purpose-built museum building, the former Farnsworth family house and a Congregational church converted to display art on two levels. The line provided a rubber-tire tour train connection, though one could also walk to it in about 10 minutes.

The key collection displays Maine’s most famous artistic family, three generations of Wyeths. The youngest, Jamie, painted and still paints landscapes and local residents, while his father Andrew was cast as a twentieth-century realist and N. C. Wythe, an illustrator whose work included the Far West.

Outside Rockland, the Owls Head Transportation Museum displays an active airfield used to exercise its collection of antique airplanes and a huge shed housing historic vehicles dating from before 1900 and into the early 20th century.

The most curious vehicle was a 1923 popcorn and peanut wagon built on a Model T chassis used to sell snacks. Others included a 1948 Buick Special and a varnished wood-sided Ford station wagon. An auction had just taken place, and new owners were collecting the keys to drive away with their new purchases.

The ship anchored off Camden, and apart from Bar Harbor, arguably the Maine Coast’s most popular large town, for its handsome brick main street and quality shopping.

Camden, a substantial small city, is built with an abundance of brick and less wood. * Photo: Ted Scull

US Route 1 passes through the center, but as the heavy summer traffic moves so slowly, it is easy to cross the street. To be told, it’s the numerous pedestrian crosswalks that are largely responsible for the traffic backing up.

Mt. Battie, like Mt. Cadillac, affords a fine view down to the town and out to the islands where the ferries leave a watery wake the way airliners spew white vapor trails in the sky.

The call at Belfast located along a river, with the tongue twisting name of Passagassawakeag, gives access to the Penobscot Marine Museum in nearby Searsport. I once dated a woman from Belfast, and the locals were impressed that I could pronounce the river’s name with such ease. I might admit, though not always, I knew someone from there.

Like many important New England ports, whaling near and far and the lucrative China trade brought great wealth and important connections to the rest of the world. Successful captains returned from Asia with fine china, furniture and artwork to furnish their opulent houses, some of the treasures presented here in period rooms.

One of the rooms at the Homeport Inn, Searsport decorated with Chinese and Japanese porcelain brought back by the original owner in the 19th century. * Photo: Ted Scull

Photographs depicted life on board during the long voyages out and back, storms at sea, and Hong Kong following the Treaty of Nanking in 1842 that allowed the British to establish a Crown Colony lasting until 1997 when it was returned to China.

A thrilling historic video taken by a brave sailor showed mountainous seas sweeping across the open decks and one wondered how the ship could have survived the pounding. Of course, many did not.

At the end of our week on the Maine coast, we sailed out of Penobscot Bay and up the twisting river of the same name. The fog rolled in, and we could hear warning sounds from lighthouses and beacons ashore as well as our own horn mounted up forward.

After a week of long-range views, sunshine and a few drops of rain, the atmosphere was almost claustrophobic. Then suddenly we broke out of the damp, gray mist rising from the river and docked alongside Bangor’s waterfront park.

Suellyn and Ted enjoy a substantial breakfast before beginning the drive down the Maine Coast.

The previously quiet setting had erupted in an annual folk music festival providing a last night of entertainment before collecting the car, driving across the Penobscot River and on down the coast of Maine.

Boothbay Harbor and Bath are two coastal towns we visited on our own.

Bath, long known as the “City of Ships,” then and now finds its identity in shipbuilding at the long-established Bath Iron Works. Founded in 1884, the shipyard has built private, commercial, and military vessels, many of which have been ordered by the United States Navy.

Bath’s tree-lined avenues are lined with classic examples of America’s homegrown architecture, and be sure not to miss the Maine Maritime Museum with exhibits that relate the story of Maine’s long connection with ships and the sea.