Ponant, which resumed service last summer before halting over the winter, plans a gradual resumption in summer 2021 featuring its new polar vessel, Le Commandant-Charcot, and sailings in the Arctic, Northern Europe and Mediterranean.

The 14-night inaugural cruise, between Iceland and Greenland, is to depart May 31, with highlights like hiking on Jan Mayen Island and a journey through the world’s largest fjord network. 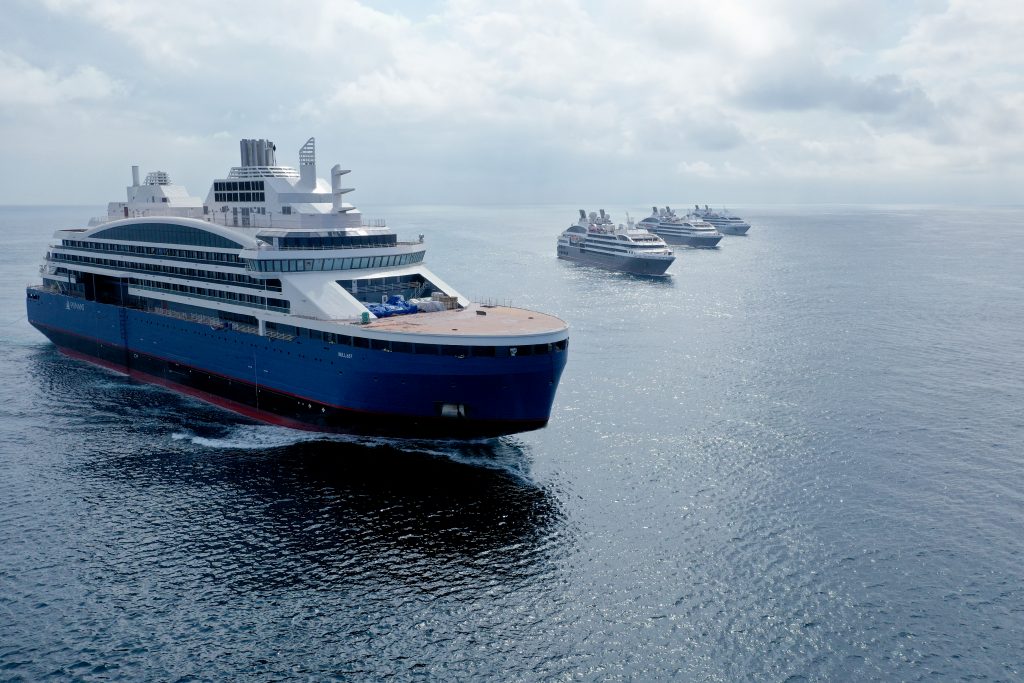 Le Commandant Charcot (foreground) rendezvoused with three other Ponant ships in the Strait of Gibraltar. * Photo: Loic Jugualt for Ponant

Ponant will run 30 Arctic expeditions, including a seven-night Iceland circumnavigation on Le Jacques-Cartier. Six departures are offered in July and August. During an “Unexplored Svalbard” sailing, with 10 departures in June and July, travelers will have the chance to see bearded seals, reindeer and barnacle geese. For the first time, the itinerary includes a visit to the ice-covered Søraust-Svalbard Nature Reserve.

Also new is “Expedition Along the East Coast of Greenland,” Aug. 15-30. After a stop at the Northeast Greenland National Park, L’Austral will head to the Ittoqqortoormiit region, one of the most remote inhabited places in the world, before crossing into the Arctic Circle. 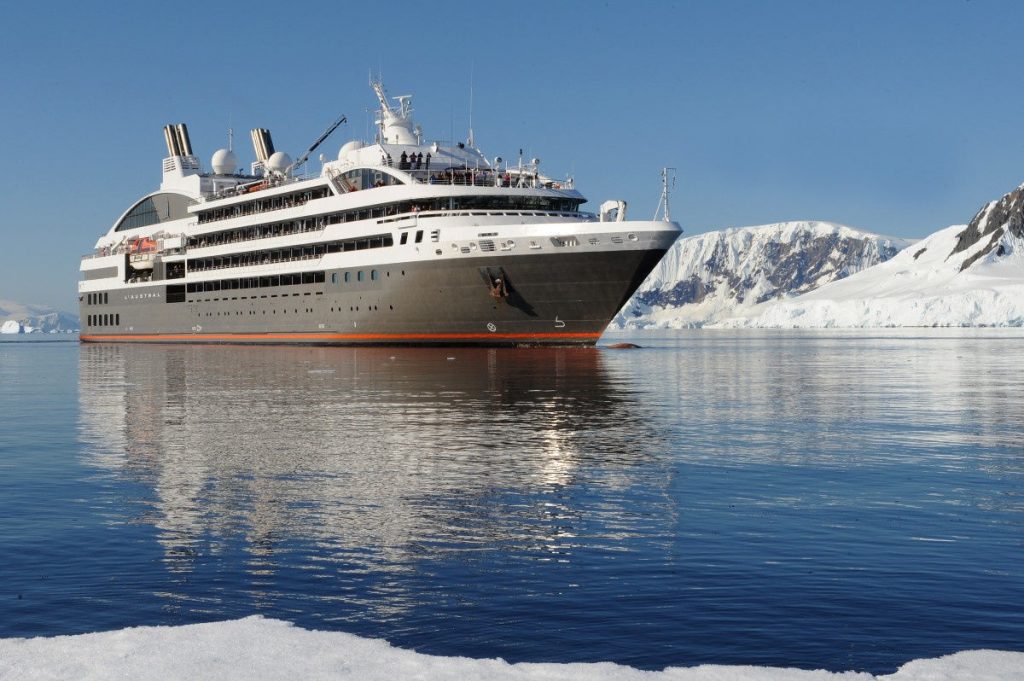 L’Austral will explore Greenland’s east coast before heading to the Arctic. * Photo: Ponant

“World Affairs in the Baltic Sea,” July 17-25, will delve into centuries of history, and the new “Treasures of Scotland and Ireland” cruise, May 18-25, will stop at less-frequented spots like Kinsale, a historic 13th-century fishing village in Cork; and Iona Island in Scotland, population 130.

In the Mediterranean, two Ponant ships will explore Croatia, Italy, Greece, Spain, Portugal and Malta on 22 itineraries between May and September. Three new sailings include the four-night “Adriatic Escapade” from Valletta, Malta, on Aug. 31, with stops along Croatia’s coast, before arriving at Venice.

Another explores Cape Verde, the Canary Islands and Spain’s southern coast, May 14-27, with maiden calls at Oran and Algiers. A partnership with the Louvre will bring Paris to the sea with a cruise to discover the ancient sites of Greece and Istanbul during “The Cyclades and Ancient Treasures,” July 13-20, with visits to numerous UNESCO World Heritage Sites.

Windstar Cruises became the first line to give Alaska a pass in 2021. This news comes with the postponement of all sailings until May and revised routes to skip the United States and Mexico.

The delay impacts the recently extended and updated 312-passenger Star Breeze, which is now planned to return to service May 15 with a fresh itinerary from St. Martin.

Star Breeze had been scheduled start sailing March 27 in the Caribbean before transiting the Panama Canal to the Sea of Cortez and then on to Alaska for 10- and 11-day cruises. However, those longer sailings don’t comply with the U.S. Centers for Disease Control and Prevention’s seven-day limit to operate stateside.

The newly stretched Star Breeze will not sail in Alaska during summer 2021 after all, but on a new itinerary from St. Martin before heading to Tahiti. * Photo: Fincantieri

Instead, Star Breeze will sail three departures of the adventure-focused “Beach Fun & Sun – A Remote Caribbean Getaway,” with an emphasis on secluded beaches and water sports.

The ship will use its water sports platform and crew for trips to remote beaches, kayaking, snorkeling, water skiing and stand-up paddle boarding. Stops include Norman Island at the southern tip of the British Virgin Islands; two days at Prickly Pear Beach, a white-sand beach with turquoise waters ideal for snorkeling on Virgin Gorda; and Soper’s Hole on the quiet island of Tortola.

Star Breeze will then remain in the Caribbean offering a variety of itineraries through Aug. 14, before heading to Colombia and the Panama Canal. After that, the ship will strike out for Tahiti and sail in French Polynesia Sept. 19 through March 2022 on seven, 10- and 11-day cruises.

Usually only Windstar’s 148-passenger Wind Spirit is based in Tahiti so this will be an opportunity to experience the islands on the newly transformed yacht which offers two new dining concepts with serious chef backings, as well as new suites, a spacious spa/fitness center and other “bigger ship” perks, all for just 312 passengers at most.

Star Legend, currently undergoing the same extension/upgrade as Star Breeze did, is planned to be the first Windstar yacht to return to service, beginning May 1 from Piraeus on the new 10-day “Greece, Israel & Egypt: Footsteps of Faith in the Holy Lands” cruise.

Wind Spirit will begin sailing in Tahiti on May 6, Wind Surf in Civitavecchia (Rome) May 9 and Wind Star in Piraeus, Greece, May 22. The third ship to be “stretched” and updated, Star Pride, is to debut July 14 in Dover, England. 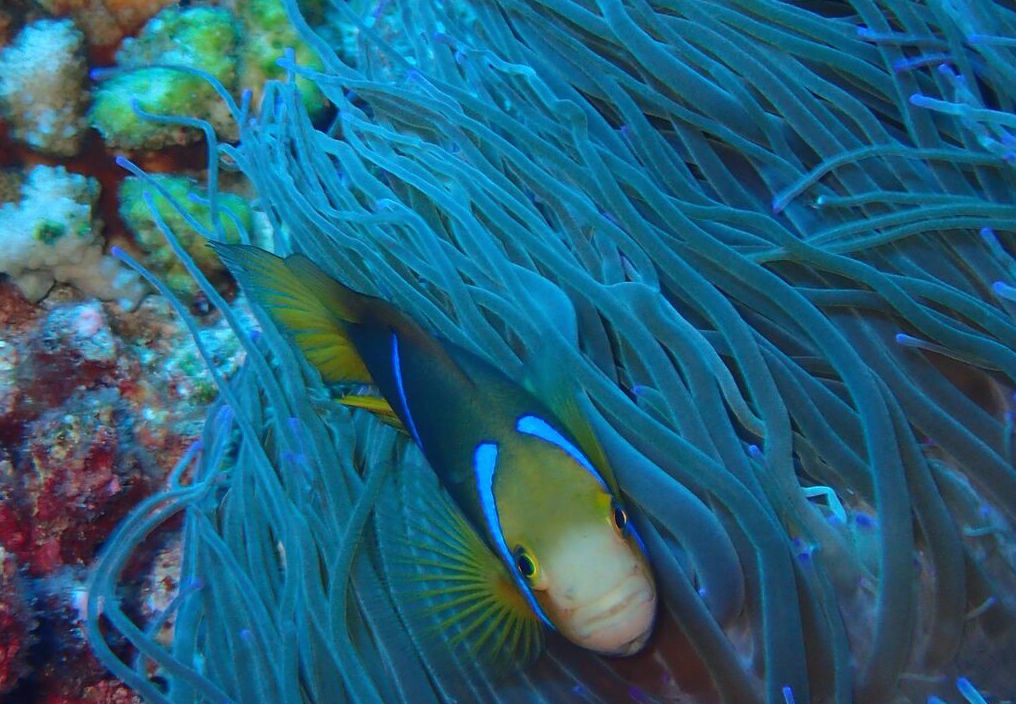 Crystal is extending its temporarily relaxed booking policies to all 2021 voyages. This applies to the entire fleet, including yacht Crystal Esprit, the river vessels and new expedition ship Crystal Endeavor, whose 2021 delivery date is pending.

Travelers sailing in 2021 may cancel with no penalty up to 60 days prior to their first date of service. There is a 25 percent penalty from 61 to 30 days before the trip, 50 percent for 30 to eight days prior and 100 percent for seven or fewer days.

For all voyages through 2024, Crystal will continue to offer reduced deposits of 15 percent, compared to the normal 25 percent. In addition, the company’s no-money-down deposit window has been extended through Feb. 22 for all new and existing bookings through 2024.

Meanwhile, AmaWaterways’ new “Ultimate Cruise Flexibility” program allows travelers who book a Europe or Asia trip by Jan. 31 the ease of knowing they can reschedule the river portion without penalty.

Cruise dates may be rescheduled through 2023 with no change fees. Travelers can change the date for any reason up to 48 hours before the start of their AmaWaterways-purchased services without fees.

For those who book other parts of their journey through the line, from a pre- or post-cruise land package to air travel and extra hotel nights, the “Travel Waiver Plus” can be purchased for $175 per person to cover cancellations for any reason up to 24 hours prior.

The 188-meter/453-foot, three-mast full-rigged yacht, which carries up to 136 passengers, updates Sea Cloud Cruises’ fleet with balcony cabins, a wellness and spa area, a sea-view fitness center and a casual Lido Deck bistro in addition to a fine-dining restaurant.

A true sailing vessel, Sea Cloud Spirit is fitted with 28 custom-made sails that have a total area of 4,100 square meters/44,100 square feet.

The maiden voyage is a 10-day “Tour of Spain,” visiting mainland destinations including Barcelona, Tarragona and Valencia as well as the Balearic Islands. 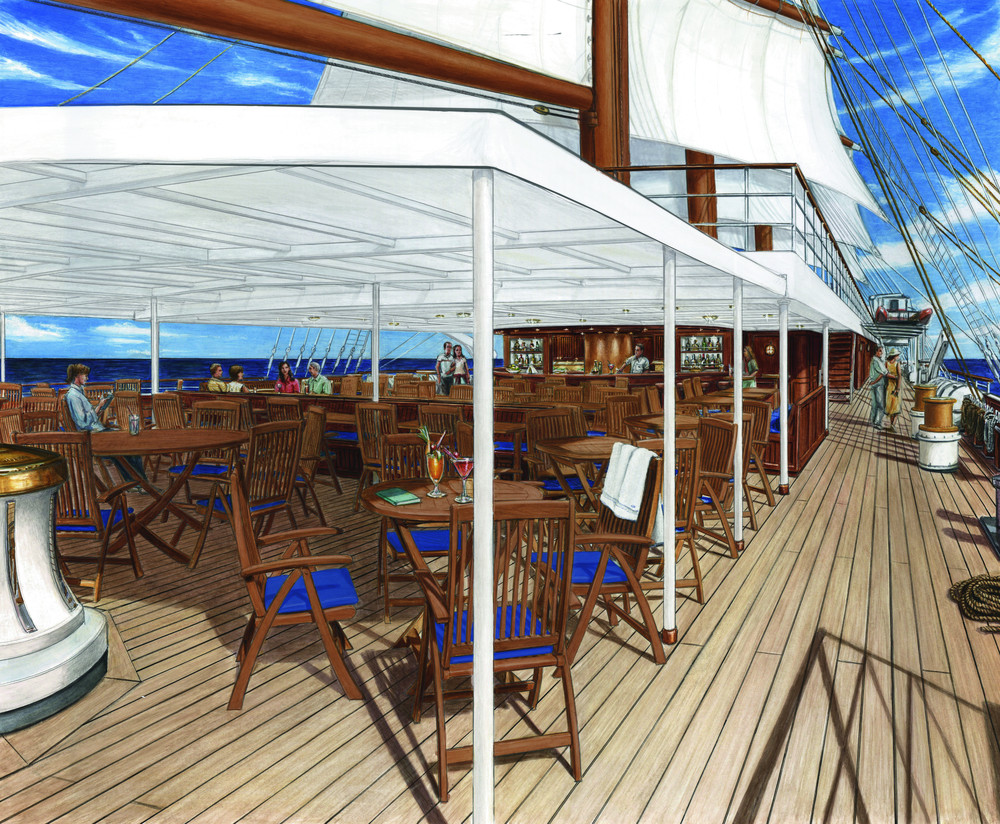 A new expedition cruise series, “Whale Sharks of Qatar by Sea,” offers access to one of the planet’s largest aggregations of whale sharks. Each year from April to September, hundreds flock to the Al Shaheen region, a restricted marine zone off Qatar’s northeast coast.

Sometimes called the gentle giants of the sea, these are the largest shark and the largest of any fishes alive today, with sizes that are believed to reach up to 20 meters/65 feet.

Qatar Airways’ Discover Qatar is promoting eight- and 10-night adventure cruises aboard Ponant’s 170-passenger Le Champlain. The trips, from March 24 to May 7, will take advantage of the ship’s Blue Eye underwater viewing lounge and Zodiacs for exploration.

The 76-page brochure is the comprehensive reference for travelers to plan a trip to the Holy Land, Black Sea, Mediterranean, Caribbean, South America and Antarctica.

Copies may be requested at www.AtlasOceanVoyages.com/brochures.

A digital edition is also available. 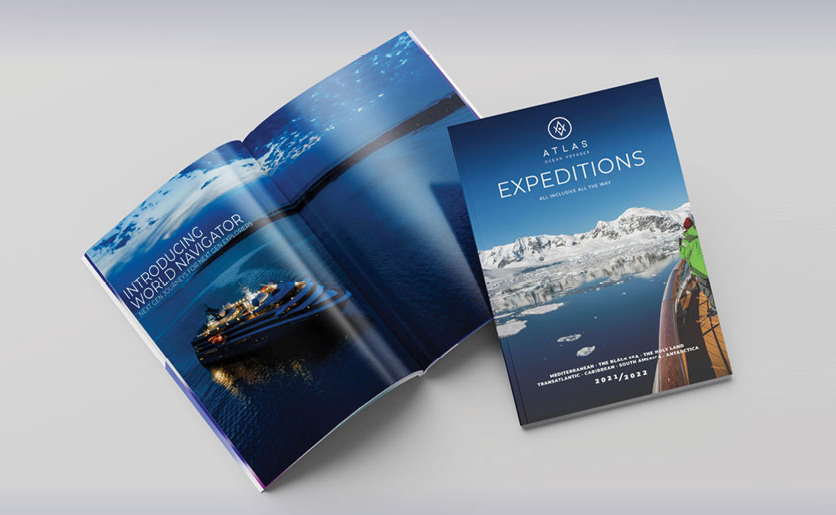 Lindblad Expeditions and Island Conservation, an international nonprofit conservation organization, aim to help the people of the Galápagos who have been devastated by the socioeconomic impact of the COVID-19 pandemic.

Tourism accounts for more than 80 percent of the Galápagos economy so families, businesses and the community at large are suffering profound hardship. In the first two months of the pandemic alone, the islands’ economy lost $50 million, almost a quarter of the annual income. Visitor numbers between July and October dropped 95 percent.

The economic devastation also poses a serious threat to the conservation of this extraordinary archipelago.

Donations received by the newly launched Galápagos Island Relief Fund will enable a local nonprofit organization to disseminate micro-loans. The goal is to secure $500,000.

“The people of Galápagos are struggling more than I’ve seen in my 53-year relationship with the Islands,’ Lindblad Expeditions Founder and CEO Sven Lindblad said. “Stimulating the local economy through community micro-loans has the power to activate a thriving system, helping entrepreneurs and small business owners develop new ideas to complement sustainable tourism, and meeting the needs of the local community long after the pandemic is over.”

In just over a year, travelers will be able to sail on the 100-passenger vessel when it debuts in January 2022.

This is the first oceangoing yacht for the Scenic Group’s Emerald Cruises, which fields river vessels under the Emerald Waterways brand.

Emerald Azzurra is afloat. Work will proceed with the yacht scheduled for completion in early 2022. * Photo: Emerald Yacht Cruises

Emerald Azzurra has 50 deluxe suites and staterooms, most with a balcony. Three dining venues, a wellness center and a marina platform for easy access to snorkeling, paddle boarding or swimming are other features.

Its maiden voyage, the seven-night ‘Best of the Red Sea,’ is set for Jan. 28, 2022, round-trip Aqaba, Jordan. Fares start at $3,315 per person in an ocean-view stateroom. With “Super Earlybird” savings, a balcony stateroom starts at $3,769 per person.

SeaDream’s twin mega-yachts will be in the Mediterranean from April through November.

Highlights include historic Istanbul and yachting destinations like Santorini, Greece. The Eastern Mediterranean cruise that stops at Haifa, Israel, will sail in May 2022, while one Black Sea voyage is set for June and the other, August. 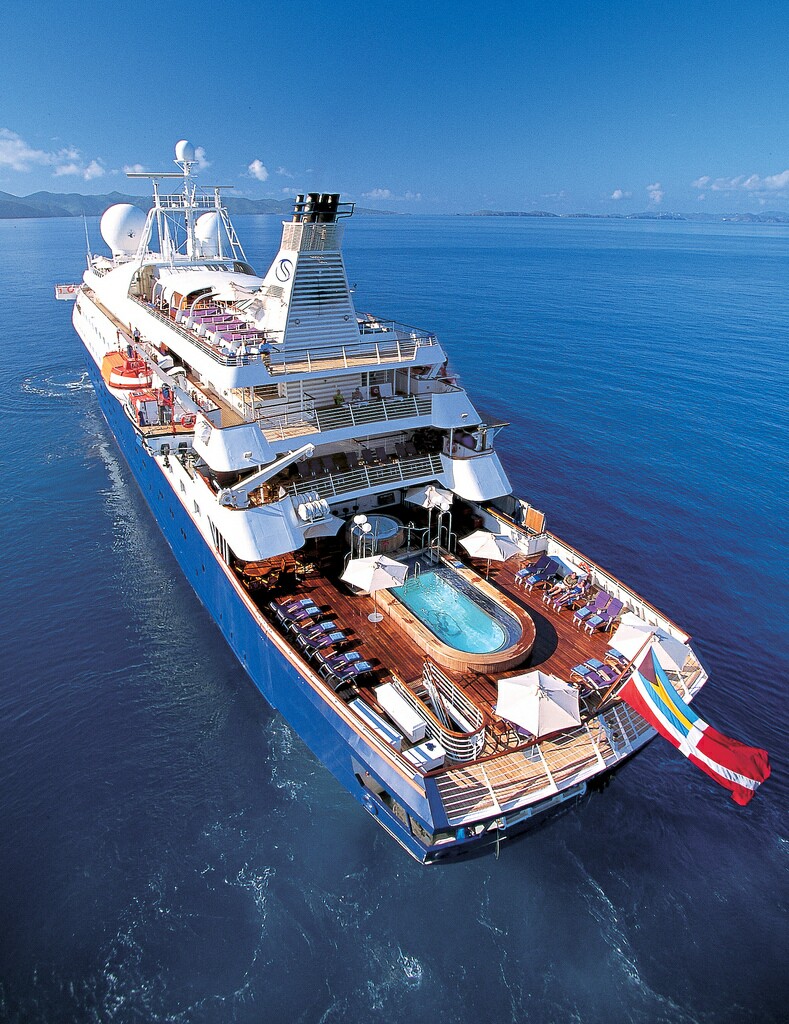