Welcome to the ninth in a series of monthly installments from Elise, sharing their story behind the scenes.

In a prior post, I shared a story of a memorable small ship moment with AC/DC Lead singer, Brian Johnson. That was my only “known” interaction with someone famous. Other than the time I stalked Yoko Ono in the Hotel Danieli, Ladies Room, in Venice. Read on.

For a few years, Tim and I ran a small-ship cruise tour for Tauck that originated in Venice and that allowed us to spend a lot of time in the famous Hotel Danieli prior to boarding the cruise ship, which at the time was Ponant’s 90-passenger Le Levant. We were in the hotel lobby, waiting for our room to be ready, when I noticed the bellmen carrying a large quantity of Louis Vuitton bags and travel cases. They carefully stacked the bags in the lobby — just opposite of where we were sitting. 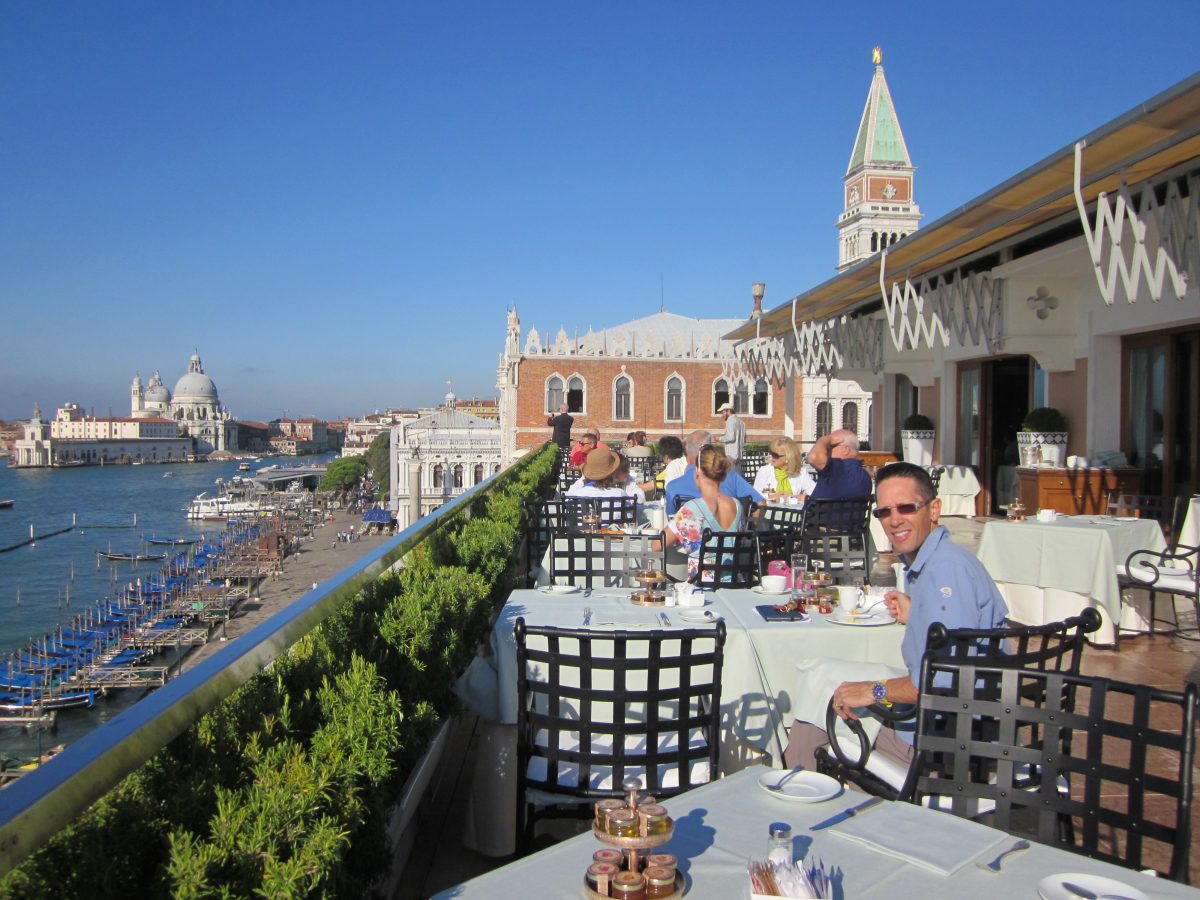 I will share with you that Tim is well aware of my fantasy that someday, I would prance around town, doing my daily business, toting a beautiful Louis Vuitton bag. Diligently, he constantly reminds me that it would be nice to retire someday (before we die).  So to appease my fantasy (in reality — to shut me up for a while), he found me a very poorly crafted $20 LV street bag. The only characteristic that somewhat represented a real “Louis” was the color scheme. The entire bag smelled like glue and after a few days of using this grandiose purchase, the handles of my pleather bag cracked and split. Buyer beware — this is what you get when buying a street bag that is so cheap that it couldn’t even be classified as a bad knock-off.

Ok, back to the “real deal” in the Hotel lobby. When I saw this amazing collection displayed before me, my female instincts kicked in and I was determined to remain camped out in the lobby until I witnessed who owned this treasure trove. And then she appeared. Coming down the sweeping staircase was a very petite woman complete with a fedora hat and large, dark sunglasses. She sat down on the couch across the lobby from me. Trying to be stealthy and nonchalant, I would periodically peek over the top of the magazine I was pretending to read. Finally, it occurred to me, this was Yoko Ono. She was in Venice for the 2009 Biennale art show and was checking out of the hotel.

After a few minutes, Ms. Ono got up from the couch, walked past the reception desk and preceded down the hall.  Spending so much time in this hotel, I knew the only place she could possibly be going was to the ladies room. What happened next is something I did, but to this day, I still can’t explain why I felt compelled to do it. I followed her.

I knew there were only two stalls in the ladies room, so there was a good chance I could approach her.  I excused myself from Tim and went to pee (even though I didn’t have to go).  When I arrived in the ladies room, Ms. Ono was already in one of the two stalls, so I settled into the free stall. Because I didn’t have to go, I put the lid down and made myself comfortable, still wondering what my plan was. After what felt like a very long time, I heard a flush from the stall next to me. That was my cue to get ready. I matched her flush, with my own flush, and exited the stall. As I approached the sink, the ladies room door opened. A strange woman poked her head into the bathroom and looked around quizzically before leaving. I began washing my hands and once again, this strange woman poked her head back into the room. Again she appeared confused and then left. It was then that I realized this stranger must have been Ms. Ono’s handler, possibly wondering what could be taking her so long. That same thought crossed my mind. What was taking her so long?  By this time, I was already on my third version of singing “Happy Birthday” to myself as I washed my hands. Then finally, her stall door opens and she approaches me. 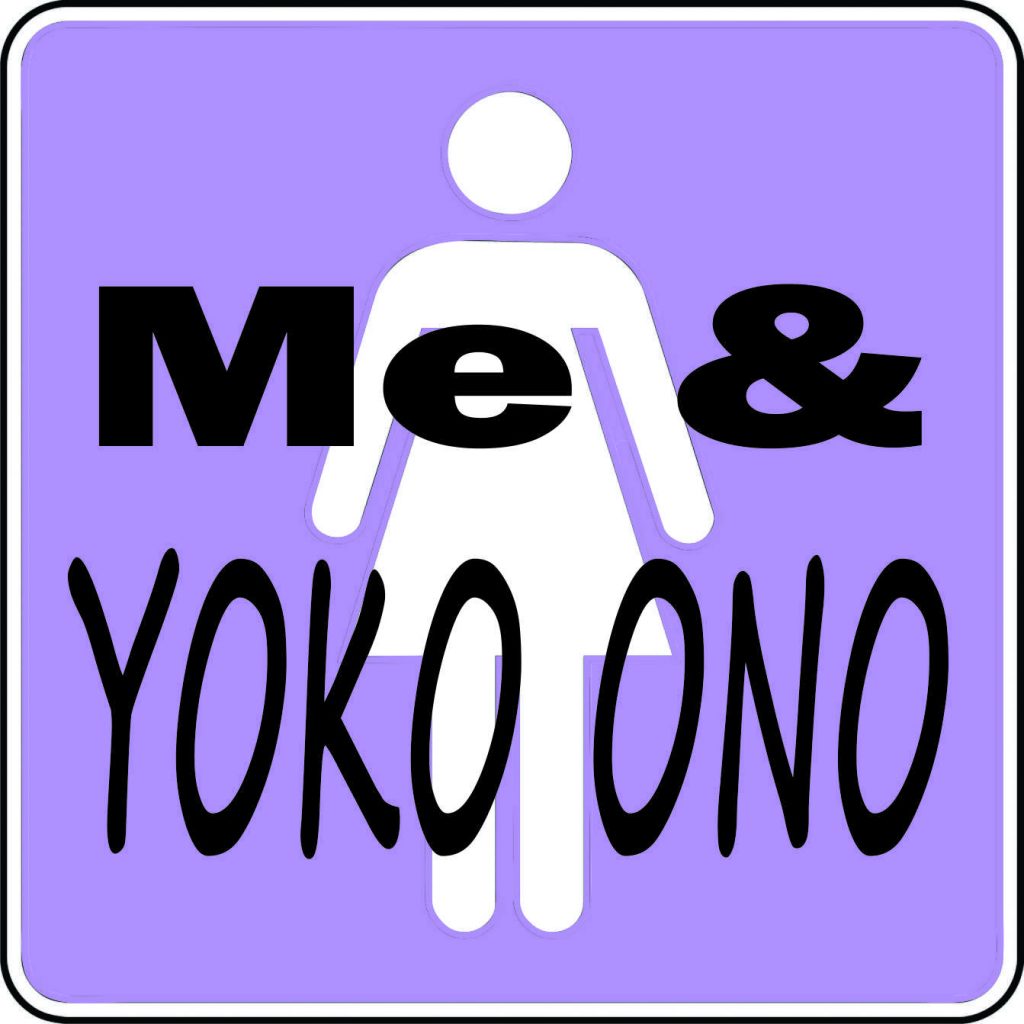 I couldn’t believe it. I still had no plan. I could have asked her about her art; John Lennon; if she got a great deal on her Louis Vuitton collection. But I had nothing. All I could muster was a squeaky “hello.” She looked up at me, glaring over the top of her sunglasses and then preceded to the sink. To the relief of both of us, her handler reappeared in the ladies room to announce that her water taxi was here and it was time to go.

I dried my hands and with my head hanging low, I slunk out of the ladies room and sulked back to the hotel lobby. Now empty of those gorgeous LV travel bags, I returned to the couch and plopped down next to Tim. He could tell from the look on my face, my mission (whatever that was) was not successful.

Was that the last time I ever stalked someone? Heck no! But the next time, I was sure to have a plan. Maybe I’ll share that story in the future.