Founded in 2007, One Ocean Expeditions operates expedition-style voyages to the Canadian Arctic, Eastern Canada, Greenland, and Svalbard in the summer and to the Antarctic Peninsula, Falklands, and South Georgia in the Northern Hemisphere winter/Southern Hemisphere summer. Between seasons, itineraries will visit Central America and the Chilean coast.

The two similar ships take less than 100 passengers, hence for Antarctica, all passengers may go ashore at one time rather than in relays with larger ships, a major plus. The newly-added RESOLUTE is an expedition cruise ship taking 184. Based in British Columbia, Canada, this smallish firm sets out to provide a serious appreciation of the Arctic and Antarctica using a three-ship fleet with the AKADEMIK pair originally built as oceanographic research vessels.

In late May 2019, the expedition line announced that the Russians had abruptly cancelled the charters for the AKADEMIK pair, and that One Ocean would operate for the foreseeable future with the RESOLUTE, a fine expedition ship that had sailed for Hapag Lloyd as the HANSEATIC.

In late October, 2019, in a Facebook post, One Ocean Expeditions Managing Director Andrew Prossin said that the withdrawal of the two ships by their Russian owners was an “unexpected and destabilizing event, and the violation of our contract remains the subject of ongoing legal action.”

Then in November, the line shut down its operations and cancelled all future sailings.

AKADEMIK IOFFE built 1989, 96 passengers; AKADEMIK SERGEY VAVILOV built 1988, 92 passengers (both ships returned to the Russian owners). In November 2018, the former Hapag-Lloyd HANSEATIC joined the fleet. Renamed RCGS (Royal Canadian Geographic Society) RESOLUTE, the ship was originally built in 1993 and sailed for many years for Hapag Lloyd as the HANSEATIC. She takes up to 184 passengers. 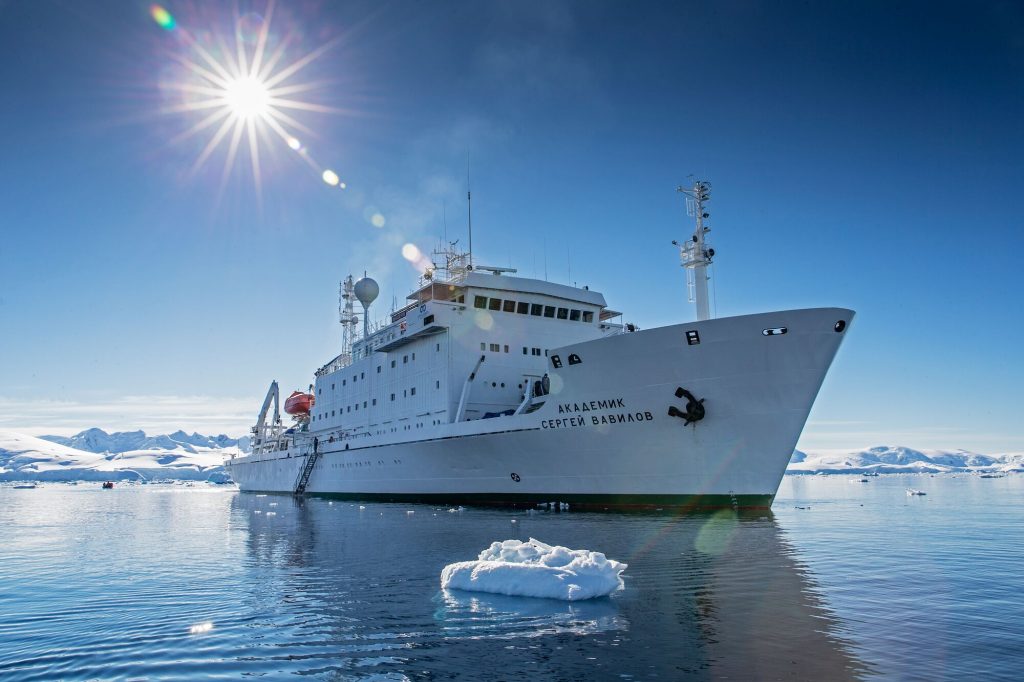 Both AKADEMIK ships are four deckers and have no elevator. They were built in Finland with ice-strengthened hulls for the Russians to be used as oceanographic research ships and for intelligence gathering. RESOLUTE was purpose built as an expedition ship with a high standard of accommodations and elevators that connect all decks apart from the presentation theater on the lowest deck.

Mostly English-speaking, passengers hail from Canada, the U.S., U.K., and Australia. Excursions often have decidedly active content so the age range is a bit lower than with some other lines.

$ to $$$ (Eastern Canada itineraries are the least expensive). On polar region voyages, triple-berth cabins provide more affordability for those traveling on a budget.

June to September, the ships are based in the Arctic Region for 9-to 11-night voyages to Svalbard, Greenland, the Canadian Arctic (Inuit/Baffin Island) and a section of the Northwest Passage. 7- to 12-night mid-summer cruises explore Eastern Canada, that is the Maritime Provinces of Newfoundland, Labrador, Prince Edward Island, Anticosti Island and Nova Scotia.

The Southern Hemisphere season is unusually long, beginning in October and lasting into March. Voyages last from 10 nights for the Antarctic Peninsula to longer ones up to 18 nights that call in at the Falklands and South Georgia as well as Antarctica. In between seasons, the ships will offer Central America (Yucatan, Belize, Honduras, Panama (including canal transit), Costa Rica and Cartagena (Colombia).

Sailing down South America’s west coast calls are made in Chile with transit along its spectacular inside passage to the tip of South America. In addition, the RESOLUTE makes June 7- and 11-night visits to Ireland, Northern Ireland, many parts of Scotland, the Outer Hebrides, Orkney and Shetland Islands, the Faroes and Iceland. 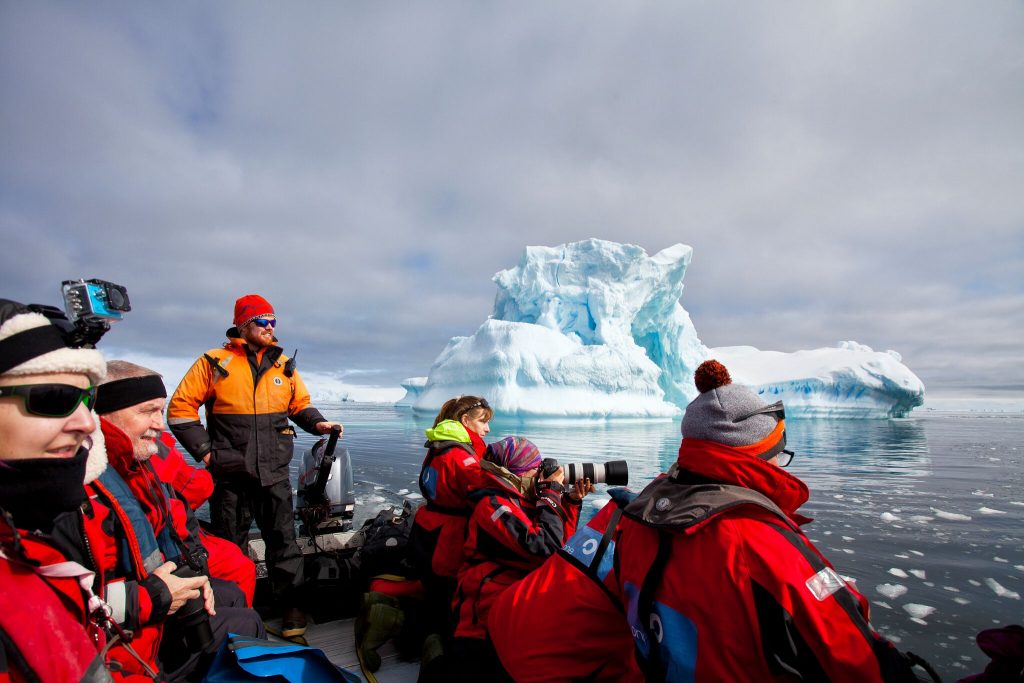 Cruising amongst the ice. * Photo: Ira Meyer, One Ocean Expeditions

Expedition gear is the main inclusion and saves passengers having to lug bulky items from home and/or having to purchase them. Provided are wind- and waterproof jackets, bib pants, rubber boots, backpacks, binoculars, and trekking poles. Antarctic overnight camping is an activity on some itineraries, while sea kayaking is an extra cost and requires advance reservations.

Both polar regions offer outstandingly beautiful landscapes, glaciers, fjords (Arctic) and abundant wildlife on land, in the sea and air. In the Arctic, visit isolated villages, and on the Antarctic Peninsula, tour a research station. In the Falklands, visit British colonials and local birdlife in the remote Southern Hemisphere, and for South Georgia, the island provides more birds to see than anywhere else in the world. Learning about historical expedition voyages from the late 19th and early 20th centuries are also draws, and will be a contrast to yours!

Both polar regions are summer seasonal itineraries. In Antarctica, the shoulder seasons — October and November and March — will be closer to the winter season.

Both AKADEMIK ships offer a wide variety of all-outside cabins with windows or portholes, and some can be opened. Layouts can be quite unusual as these ships were built for research, and the original “passengers” lived aboard for long periods of time. The larger cabins have work desks, a sofa, and ample wardrobe space. A few are two-room suites.

As one looks at the lower-priced cabins, many will have private facilities, and some will share with an adjacent cabin, while others share showers, baths and toilets along the corridor. A shared two-berth cabin arrangement, without supplement, can be arranged for single passengers; if a second passenger does not book the available berth, you land it solo. For those on a budget, the least expensive route is to book a berth in a triple, one of which is an upper. 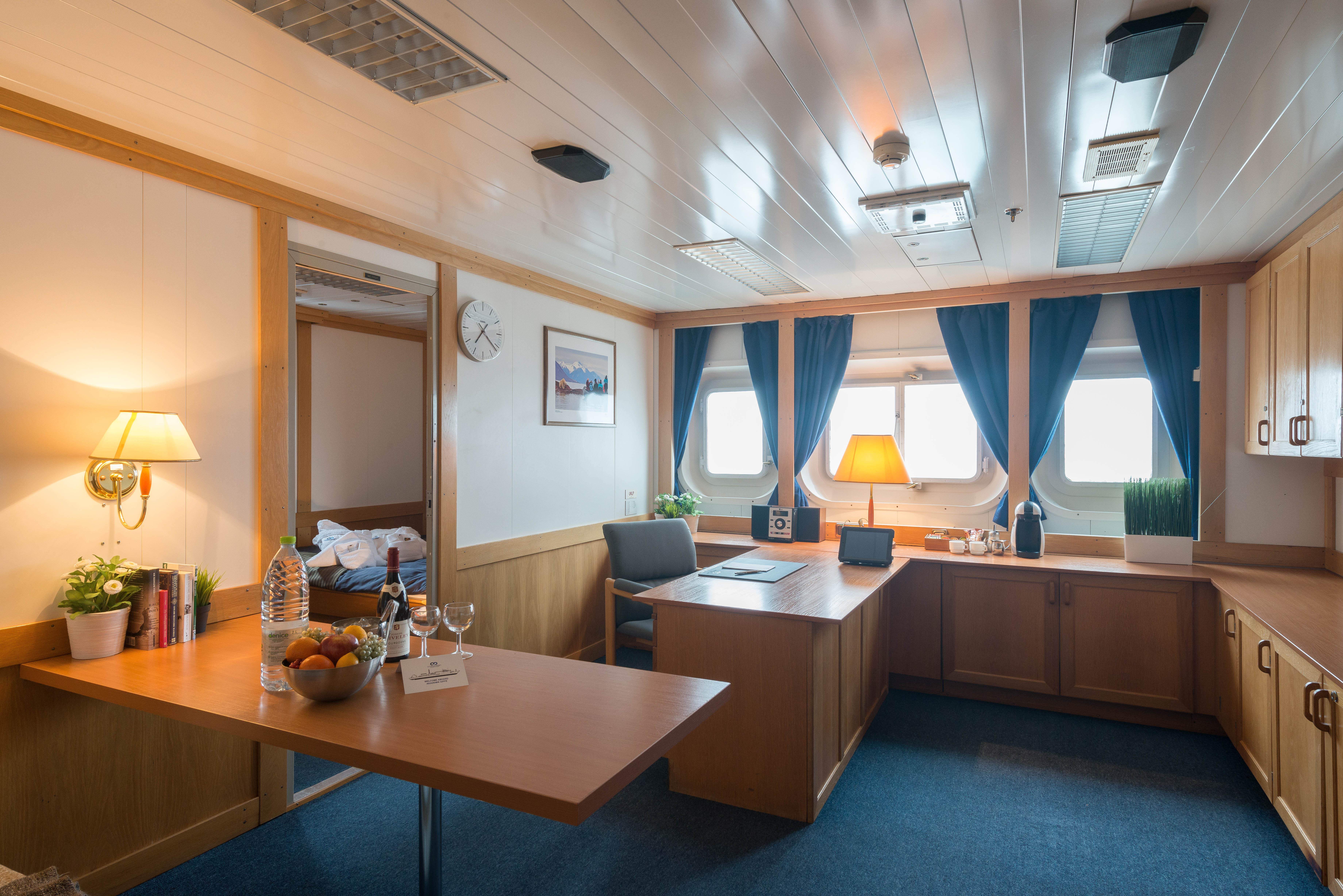 The larger AKADEMIK cabins were built for scientists living aboard for many months. * Photo:: Ronald Visser, One Ocean Expeditions

Both AKADEMIK ships are similar in size with slight variations in layout of the public spaces, and have a small pool and sauna. IOFFE has a small library separate from the lounge, and both vessels have good observation decks fore and aft. Top decks provide 360-degree views.

RESOLUTE’s plan has the public rooms located aft with a main dining room seating all at once, an aft-facing bar-lounge one deck up, and bistro dining and lounge with an open deck aft for dining in good weather. The highest passenger deck provides for an outdoor pool, gym, solarium, sauna/steam room and wellness center. Forward is an observation deck.

Located on the lowest passenger deck, the seating is open for all meals with buffet breakfast and lunch, hot dishes to order, and three-course dinners. Fancy preparation or gourmet-sounding menus are not part of the package. Food might be best described as satisfying, hearty fare, given the distance from food markets.

Off the ship, Zodiacs are used for cruising with the expedition staff close to shore, to inspect ice formations, and to approach penguins and other wildlife that live in the sea, on land or on the ice. Zodiacs also ferry passengers ashore. Activities are walking to wildlife colonies, hiking further afield, and for purposes of photography, to exercise some of the skills that the workshops aboard home in on.

During non-polar cruises, activities will additionally include stand-up paddle boarding, cycling, and snorkeling.  The naturalist staff — biologists, naturalists, adventurers, historians, and photographers give talks and shows videos. Additional activities are sea kayaking, ski touring, snowshoeing and camping overnight  Fitness and yoga classes are also scheduled. The navigation bridge is open most of the time for passenger visitation and becomes an additional public space. 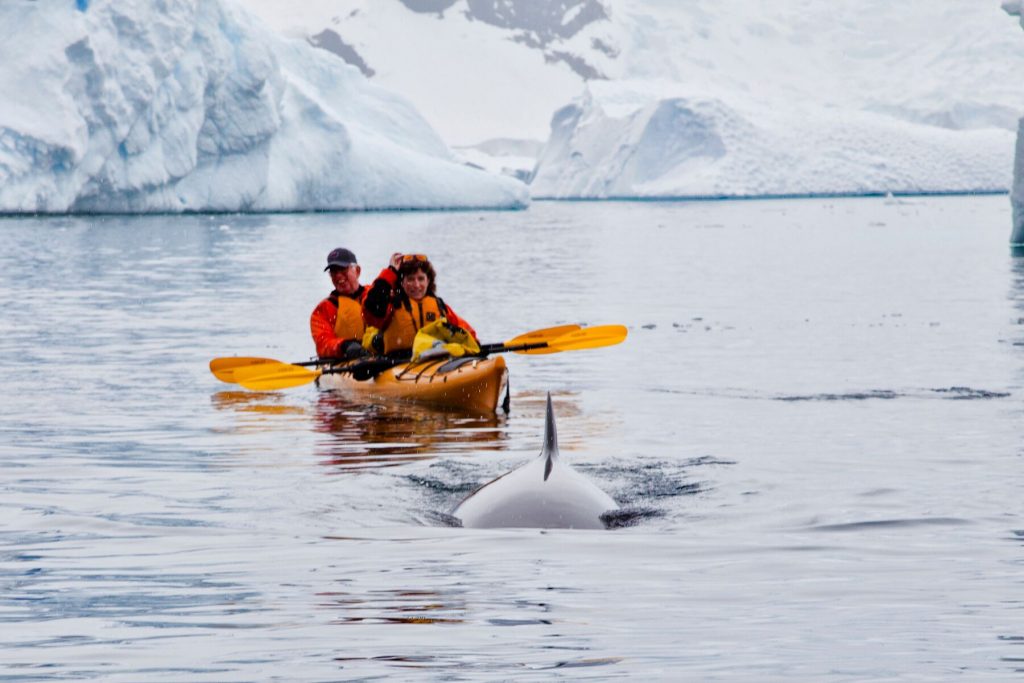 All three ships have triple-berth cabins with shared facilities, so expeditions are a more affordable option for those on a budget. The brochure maps are especially well designed.

Numerous expedition lines reviewed on this site visit much the same regions.