The Ship Vs. Boat Debate

Some people can get pretty worked up about the designation. I think it is all fun, because language is fun, and the proper use of language is important for communicating. So, I enter the fray.

Let’s play with the topic a bit before we get to the defining details about what is that floating object or moving vessel out there in the bay.

Vessel is a pretty neutral term that may apply to both — boat or ship — though the word seems a bit archaic and has other meanings.

I probably saw my first ship (and no doubt about it being a ship), when I spied the three stacks of the Queen Mary from the Lincoln Tunnel helix as she (note the feminine and more later about that) was sailing to off Europe. 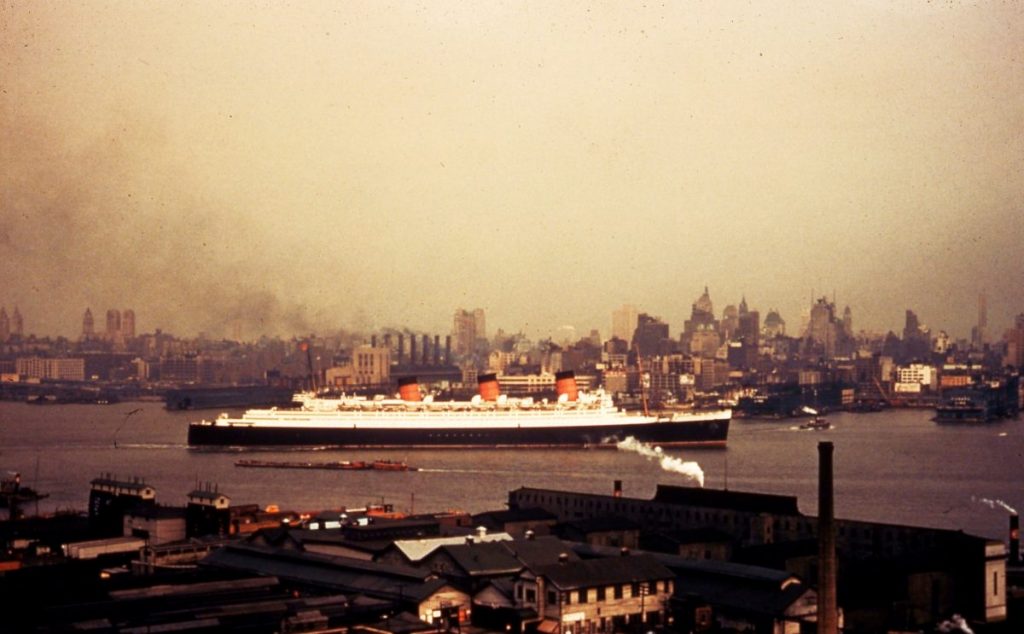 RMS Queen Mary is sailing down the Hudson in the mid-1950s on a five-day crossing to England. * Photographer not known

We were about to drive under the Hudson River (also known as the North River in maritime circles) and on up the coast en route to Woods Hole on Cape Cod and board the boat to Nantucket, arriving three hours later into a harbor full of boats, though not looking at all like ours.

Yes, a long sentence for what was then a very long drive.

To confuse things a bit, the boats to Nantucket back then were often referred to as steamers or in New England lingo – steamahs. Though some people called them ferry, and indeed it was taking people and vehicles over and back between the mainland and the island. But, they did not look like a Staten Island ferry with both ends the same, a design to eliminate having to turn around for the next trip. It had a bow (pointy end) and stern (backside/rear end). 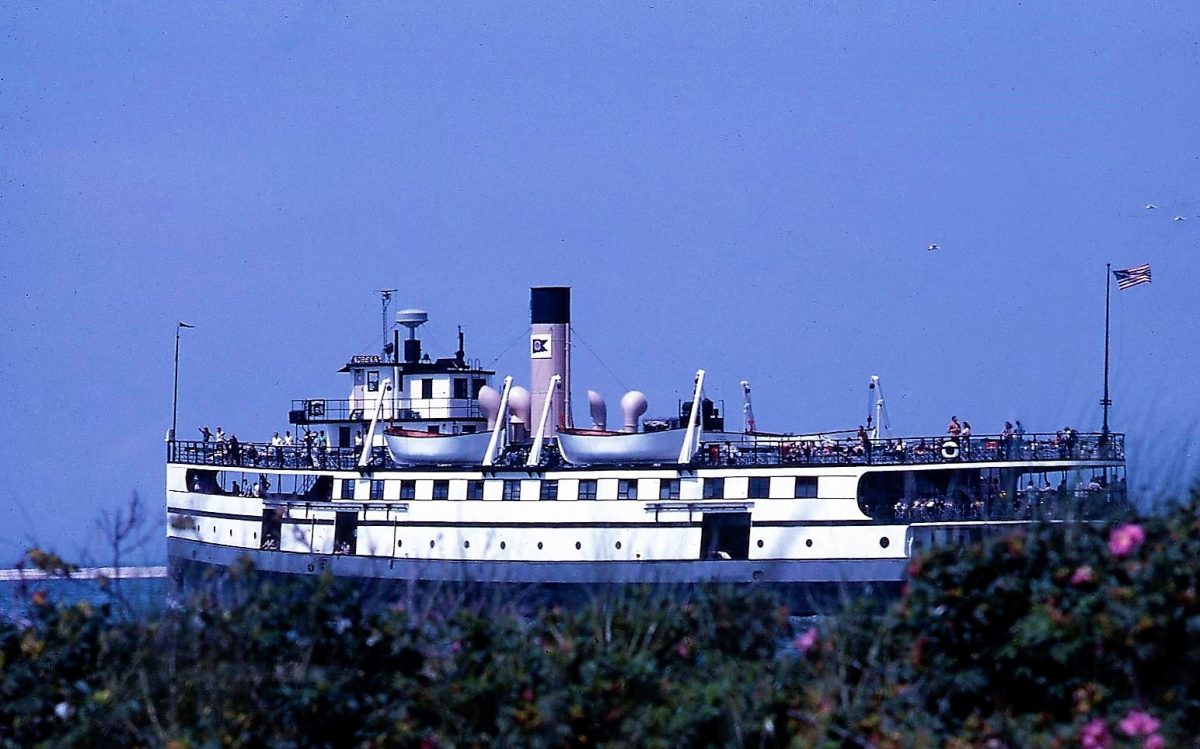 The steamer term came from the steam engine that propelled it as opposed to a diesel engine. The line that operated the steamers was called The Steamship Authority. The last Nantucket steamer was built in 1957, and after that all vessels were diesel-powered. For some, especially nostalgia buffs who loved the old steamers, or simply out of habit, it took a long time for the term steamer to die out.

But, here’s the rub, the Massachusetts-owned line still calls itself The Steamship Authority, and once some years ago simply The Authority, but that was deemed too threatening. So, it reverted to the old name. Today one boat carries an old steam whistle from one of the original 1920s steamers. Yup, there is still pride and a sense of history.

Now most people say ferry or ferryboat or boat. Most locals and summer people would laugh if you said ship.

Why? Size and where it operates. More about that in a bit.

Decades ago, a coveted way of asking someone who was planning a trip to Europe was to inquire, “Are you taking the boat or flying?” rather than using ship which it (she) undoubtably was.

Some English or Brits like to use understatement (as do some Anglophile Americans), hence preferred the diminutive word “boat.” If you wanted to argue about it, they might be prepared to add, “Well then when you get to England, what do you transfer to that takes you up to London?”

Now there can be no argument here, as that term was the official designation of the connecting railway service from the dock in Southampton or Liverpool. So why not “ship train” after disembarking from a ship?

I have no idea, and I think boat train rolls off the tongue more easily. 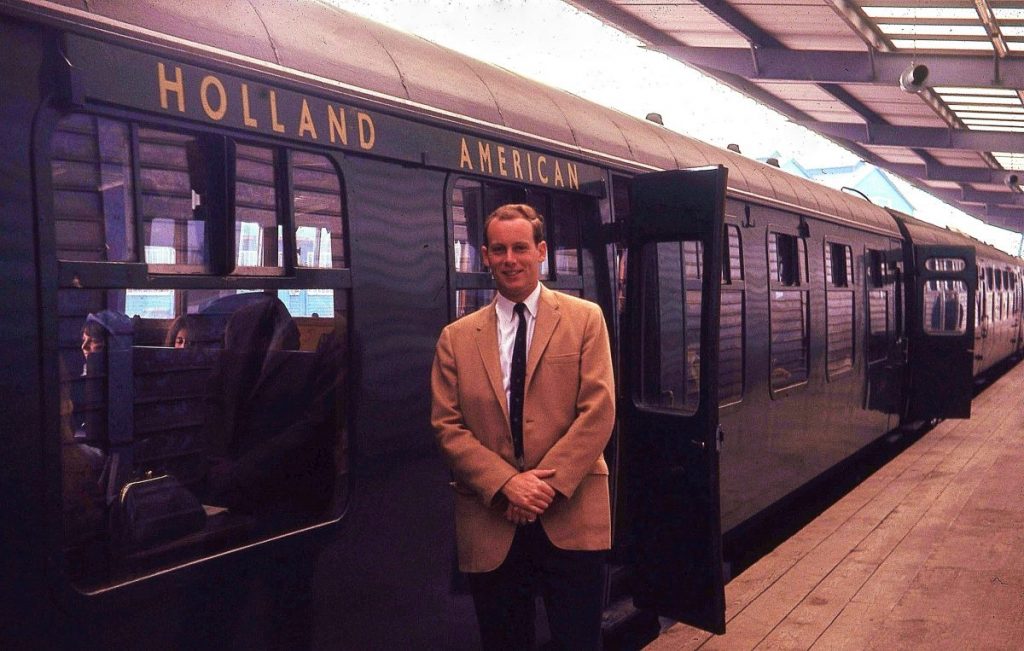 Standing alongside the Boat Train from Southampton up to London. * Photographer unknown

Another peculiarity with the English is that any train bound for London is always a train up to London, no matter if it started out in Edinburgh and traveled 393 miles south to London. Trains were either up or down and that had nothing to do with the compass direction. The capital city liked a sense of importance.

Do come up to London to see us before you go back down to your residence.

The terminology was also exported to the colonies. If you arrived at Mombasa, Kenya’s main port, the train to Nairobi (the capital) was officially known in the timetables as “UP 1” and from Nairobi to Mombasa “Down 2.”

Now some people thought, with Mombasa at sea level, you climb up 5,889 feet to reach Nairobi. Yup, but no that is not the reason.

Back to Boats & Ships

Now to fresh water and salt water and boats and ships. The Queen Mary, seen many moons ago when I was a kid, is definitely a ship or a liner as in ocean Liner.

The present Queen Mary 2 is also a ship and a liner and a cruise ship.

She’s a ship, apart from easily qualifying size, because she is designed to cross the oceans of the world and not on lakes or very far up rivers. 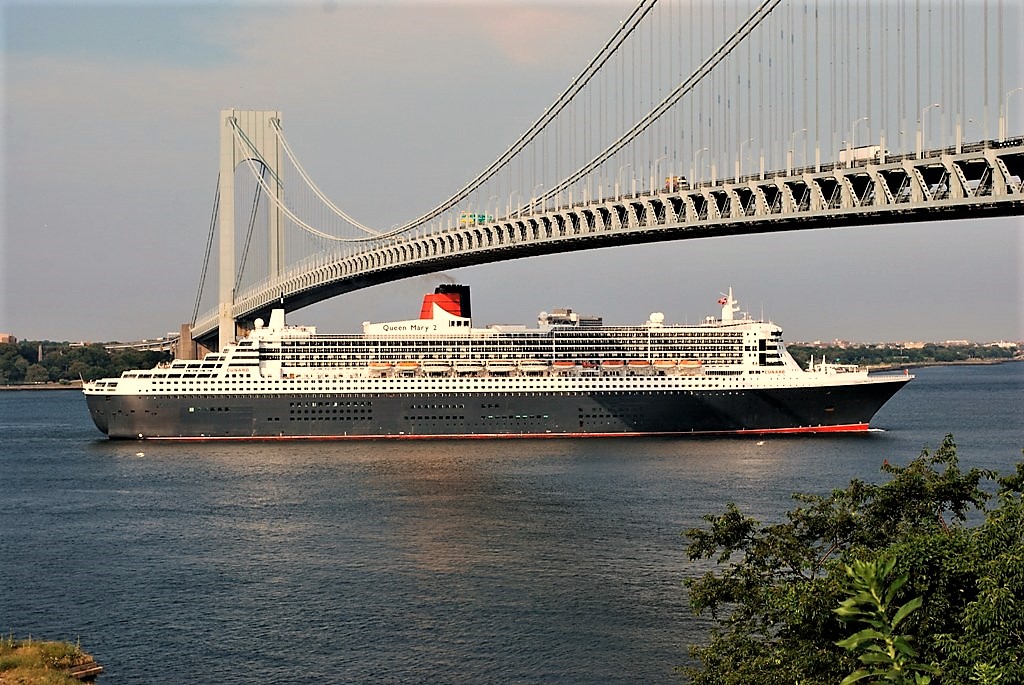 Queen Mary 2 sailing under the Verrazano Narrows Bridge at the start of an Atlantic crossing. Photo: Ted Scull

She’s a liner because the QM2 sails more than half the year on liner or line voyages mostly between Southampton, England and New York, where most passengers then disembark and continue on their merry way.

She is also built to liner specifications, having a reinforced hull and fairly sharp bow that can cut through heavy seas, often without reducing speed. And she also make cruises, sailing to a collection of ports such as the Caribbean, the Mediterranean and once a year on a long world voyage (or cruise) that may be a circumnavigation of the globe or simply a very long itinerary that sails from Atlantic Ocean ports through the Suez Canal to Southeast Asa and comes back home via Cape Town, South Africa.

Again, a long sentence for such an extended itinerary.

You would not want to sail on one of these vessels through heavy seas at the normal service speed, and in fact, the captain would not allow it.

The ship would take a beating from the pressure on the hull at speed, and all aboard would experience the ship slamming into the repetitive walls of water rather than cutting through them.

So ships are mainly salt water ocean-going vessels, and the term can be applied right down to those with pretty small dimensions.

Vessels that are designed to generally ply bays, sounds, rivers, and inland lakes are usually boats and generally not as large as ocean-going ships. They have flatter bottoms to their hull design to travel in shallow waters, hence, and without stabilizer fins, they would roll from side to side in heavy ocean seas.

However, large lakes can kick up a nasty storm. Look up what happened to the Edmund Fitzgerald crossing Lake Superior.

But what about some of our Quirky Cruise vessels such as American Cruise Line’s American Star and larger American Constellation and Blount Small Ship Adventures’ Grande Caribe and Grande Mariner?

Most mariners would argue that their design is primarily for operating on rivers, inland waterways, lakes, and coastal waters and not to cross oceans and seas and are, therefore, boats.

Blount uses ship in its company title, and I have met captains from both fleets that call them ships. It works, sounds more impressive and nobody really minds, not even me. If asked, the captains would probably agree that they are boats. 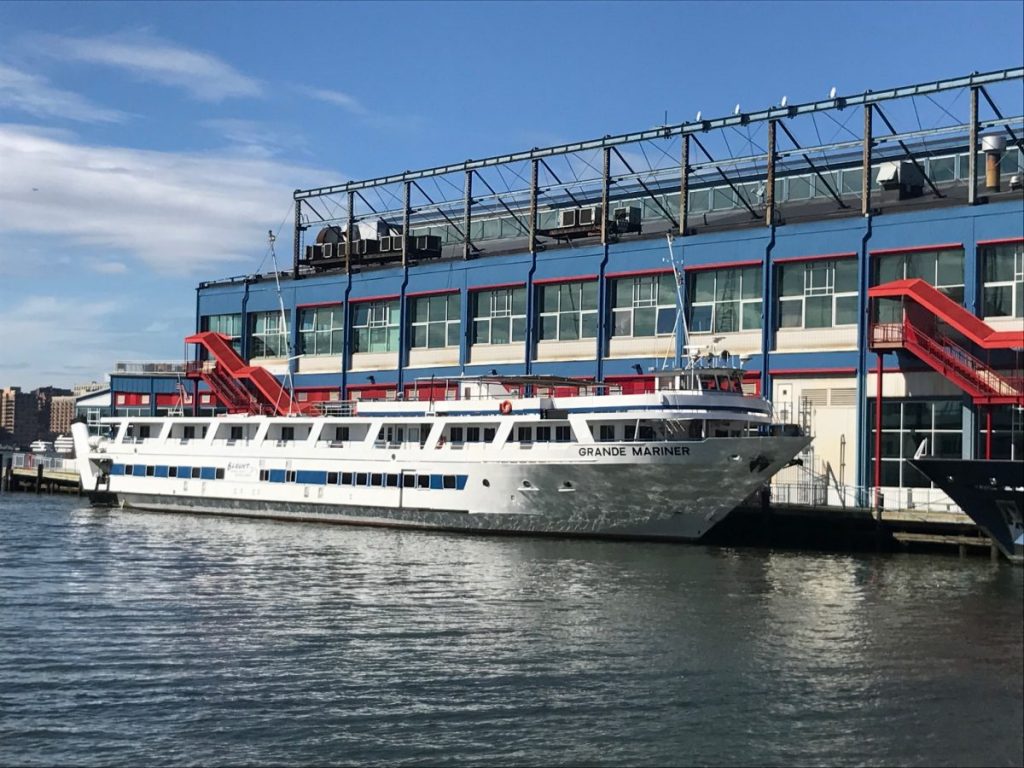 Well, if you are not a frequent passenger on cruise vessels, whether the gigantic Symphony of the Seas or the diminutive American Cruise Lines or Blount vessels, it seems reassuringly safer as well as easier to say ship.

The huge iron ore vessels on the Great Lakes are ships in size and largely in design, and they have been called lake boats, or lakers, and ships.

Carriers is another frequently used noun, qualified by bulk carrier or even a bulker as they tend to transport single commodities such as grain or iron ore in vast amounts.

So, did you look up Edmund Fitzgerald? After you do, then listen to this haunting ballad about her disappearance. Click on her photo below. 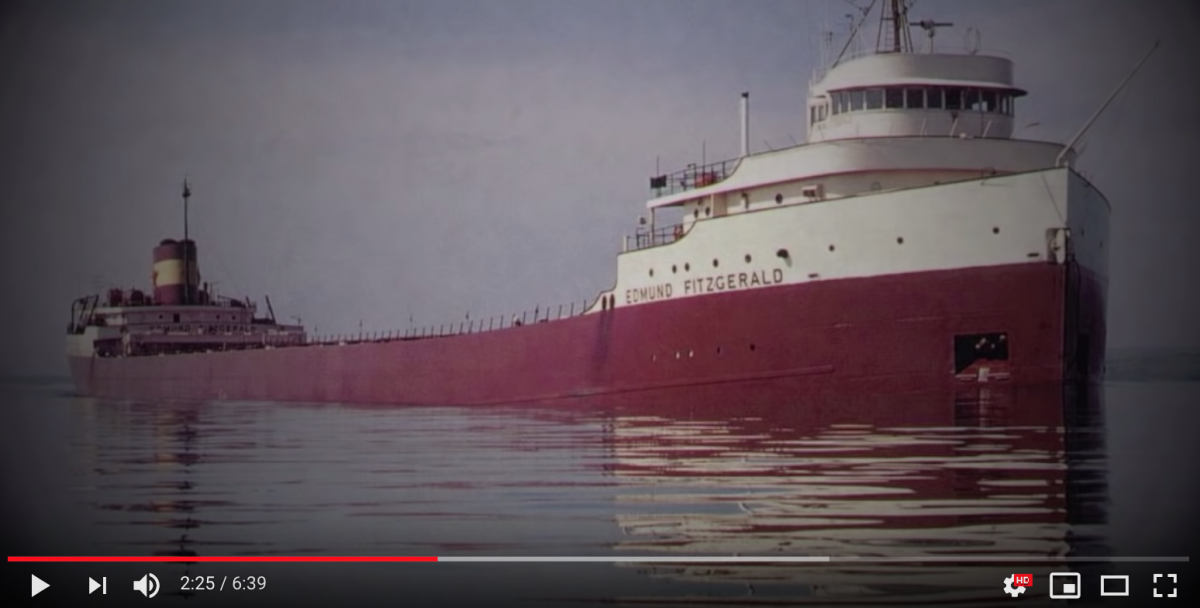 Expedition vessels that travel up into the Arctic or south to Antarctica are definitely ships even though many are quite small, taking as few as 100-150 passengers. Most are ruggedly designed as oceangoing ships to handle rough seas.

However, if you have crossed the Drake Passage in truly heavy sea conditions aboard one of these small ships, you may have wished to be on something larger. However, larger is not the only answer. The ship’s inherent design is the key to safety.

One Last Thing: Is a Ship a She or an It?

Ships as “she” came from early mariners who saw their ship as protection, a kind of mother figure. The word ship in English is a neutral term, neither masculine or feminine. However, the French use the masculine “Le” as the article in front of the ship’s name such as Le France, the last of the country’s great ocean liners. The country is a “she” — La France.

President Nixon made a speech in France many years ago, and he ended it with what he thought was the patriotic cheer – Vive Le France – and the audience broke out in laughter. 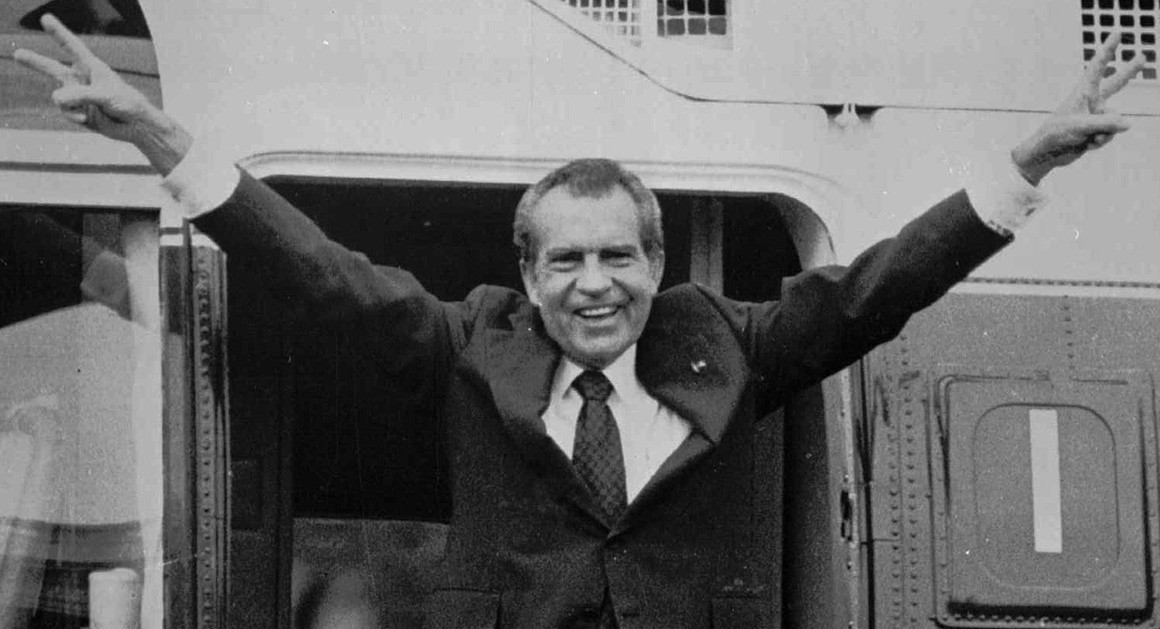