Note: Star Clippers isn’t sailing in Tahiti these days (though Paul Gauguin Cruises is), but you’ll get the picture. Read on.

It was as much the prospect of long overdue togetherness as the allure of Tahiti that motivated three busy working women living on opposite ends of the earth to coordinate their schedules. The South Pacific island chain is one of the most mythical, romantic and dreamed about places on the globe, not to mention one of the most remote. To make the trip happen, my husband held down the fort at home in Singapore and played soccer dad; Los Angeles school principal Rachael put the assistant in charge; and Chrissy happily fled the dreary March weather in New York.

Our Tahiti boondoggle came almost 20 years after our first exotic girls-only getaway to Guatemala a year after we graduated from college. A couple of decades later meant our reunion retreat had a slightly different feel, with the chatter of wide-eyed idealists fresh into adulthood replaced with talk of tough times, confidence found and fine lines. But we had traveled so far to do more than dish about husbands, boyfriends, and fat thighs, we trekked to French Polynesia to reconnect with nature too. From the decks of a rugged 19th-century style clipper ship, we set off to explore the Pacific like the Polynesians and the Europeans did centuries before.

We appreciated the creature comforts of Star Clippers’ 1991-built Star Flyer, from carpeted cabins with televisions to a cozy restaurant, but what mattered most was the authentic sailing experience created by the four-masted ship’s full sails, rigging and teak decks. When conditions are right, the Star Flyer shuts off its engines and moves under sail power alone. We spent nearly every evening watching the sun set from the top deck with the wind in our hair and the bow sprit bucking in the surf, clearing our minds and feeding our souls. Before bed, it was back on deck to stare up into the star-dusted inky black sky and listen to Rachael, our very own amateur astronomer, point out the constellations. 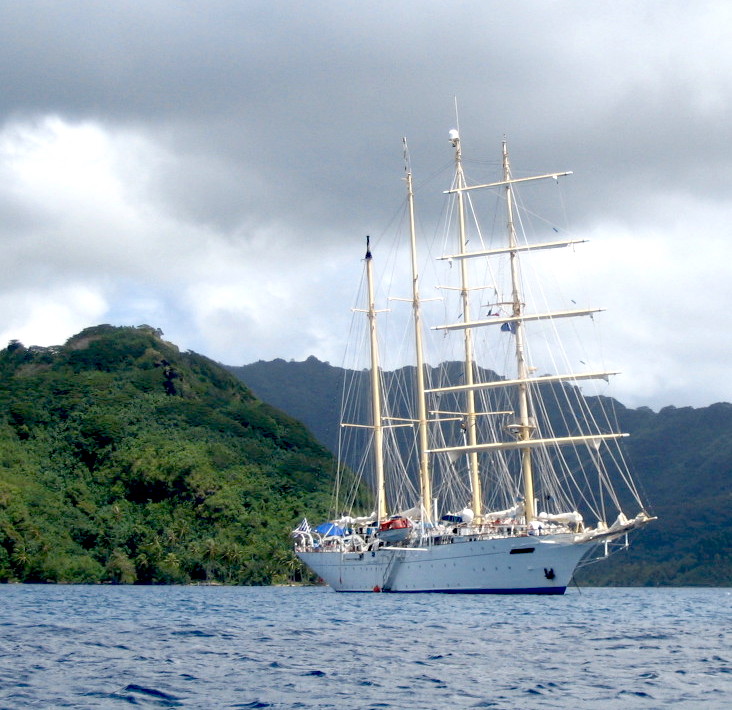 The 170-passenger Star Flyer couldn’t have suited our tastes better. Though our lives have taken their own twists and turns through the years, we’re still in sync on the style of travel we prefer (adventurous), the kind of fun we like (goofy and down-to-earth), and the people we like to do it with (each other). We’re a trio of 40-somethings with a bohemian edge and a strong-as-ever streak to try anything once.

Our voyage included stops at two of French Polynesia’s five island groups, the Tuamotu and Society islands. A vast area stretching across thousands of miles of the Pacific Ocean, most of French Polynesia’s 118 islands and atolls are what’s left of extinct volcanoes. Many islands are surrounded by gorgeous lagoons, palm-fringed motus (islets) and barrier reefs teeming with underwater sea life. The remoteness of French Polynesia means it’s never over-run with tourists and doesn’t feel over-developed.

From one port to the next, we were continually awed by the stunning color of the teal-blue lagoons. The best snorkeling was near the island of Tahaa. We signed up for the “Coral Garden Snorkel Drift” and were taken via speedboat to a site near a remote motu. In single file, our small group glided atop the clear water, looking down at the spectacular scene. Fuchsia sea anemones exposed their noodle-y appendages and ridged clamshells seem to smile with bright purple and green lips. I’ll never forget the psychedelic colors of the Checkerboard Wrasse fish.

On the way back, we three stared into the horizon lost in thought as the boat zipped through the gorgeous landscape, and were reminded of a similarly magical boat ride we took off the coast of Belize two decades before.

Another highlight was the barbecue lunch the crew prepared on another idyllic motu near Tahaa. After snorkeling a few feet offshore and checking out the long spined sea urchins hiding in the craggy coral, we sat under the shade of palm tree and nibbled on seafood kebabs and sipped Hinano beers as a troupe of traditional Polynesia dancers in grass skirts and coconut shell bras shook their lower halves in impossible ways and a chorus of ukuleles serenaded them. My eyes welled up with tears at the sheer beauty of the scene. The music and the searing blue sky and sea behind the dancers created one of the most amazing moments of my traveling life. 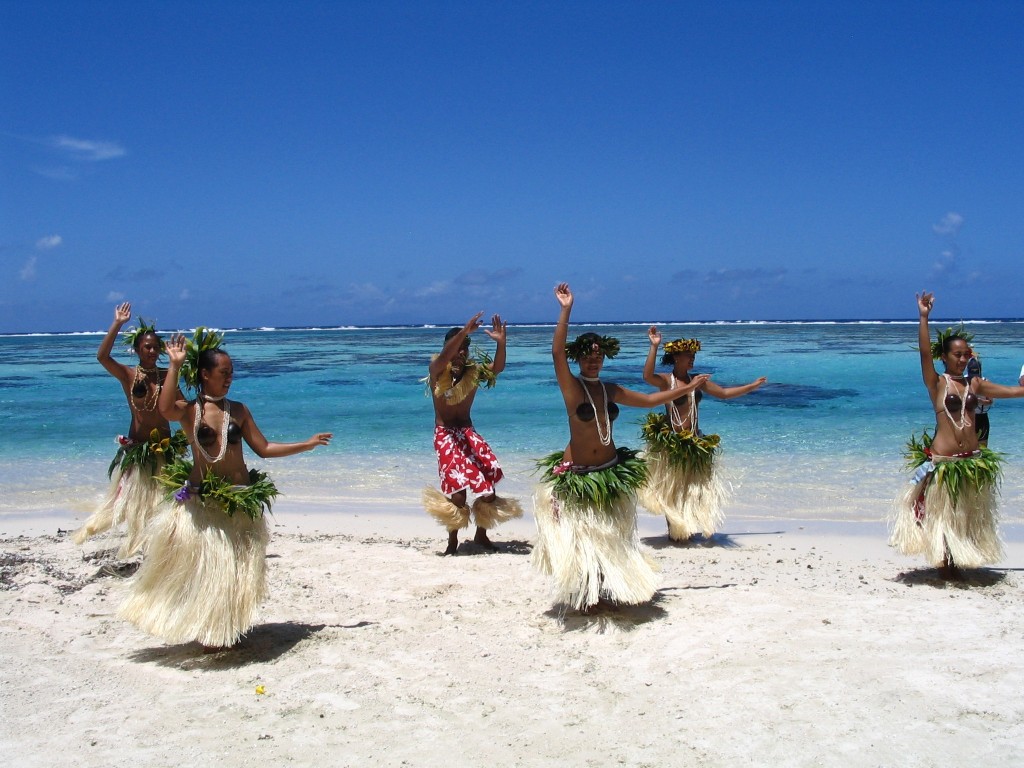 The classic dancers in grass skirts on a motu in French Poly. * Photo: Heidi Sarna

In Bora Bora, we signed up for the “Shark and Ray Feeding” snorkeling tour. Our motorboat moved through the azure lagoon towards the reef as we sat soaking up our surroundings and the twin peaks of Bora Bora behind us (unfortunately, our guides didn’t think anything of throwing the anchor overboard into the coral instead of using a mooring buoy). Our small group followed the two hunky guides, each with fistfuls of chum, into the sea. Soon surrounded by stingrays, we giggled and shrieked and latched on to each other like school girls as the creatures rubbed up against us.

At the next spot, we snorkeled near a group of black-tipped lagoon sharks (the Star Flyer’s many optional dive trips led to plenty of shark sightings). The excursion ended at a quiet beach where the pastel sea was as warm as bath water and the sand powdery soft. The guides scaled trees, gathered coconuts and hacked them open and we ate the delicious white meat inside. 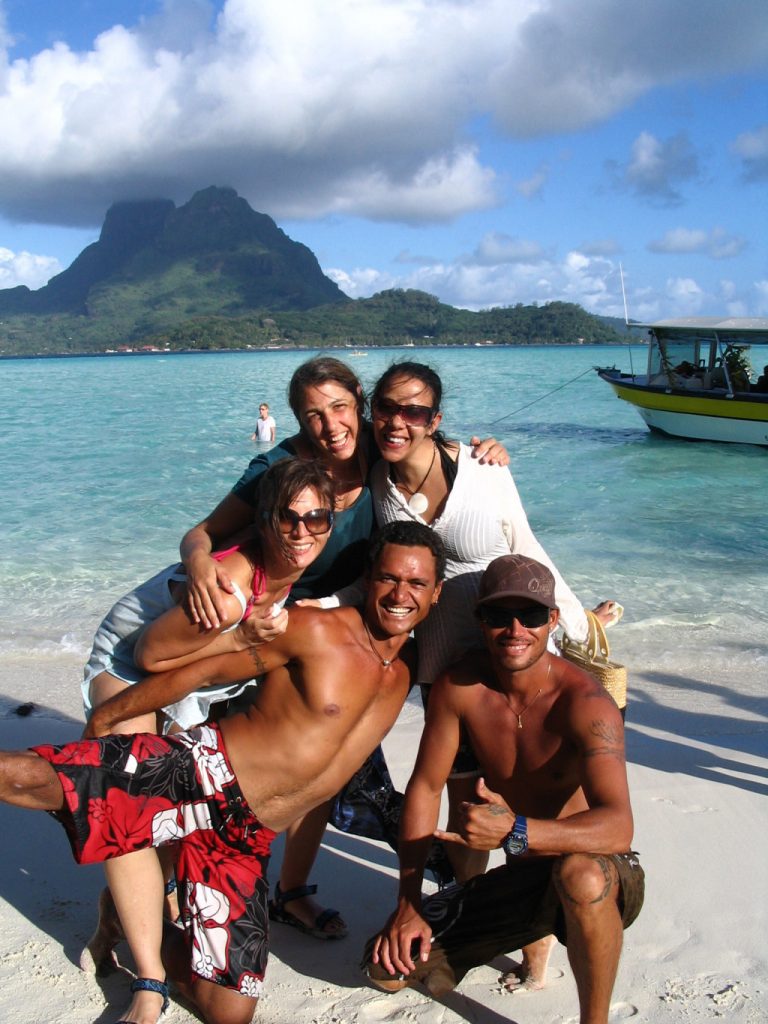 The twin peaks of Bora Bora. * Photo: Heidi a

Another interesting tour was a short visit to a pearl farm on the Rangiroa atoll to see how Tahitian black pearls are farmed and produced; afterwards, we each bought a pendant as a keepsake of our trip.

To teach us all something about where we were going, Cruise Director Frederic, a tall charming Belgian with sun-streaked shoulder-length hair, lectured in English, German and French from the open decks about French Polynesia’s geography, history and culture. He was also the MC of evening entertainment, which ranged from campy crew and passenger talent and fashion shows to silly games like the Miss Bora Bora contest that had everyone in stitches.

At the weekly pirate night party, always-creative Chrissy outdid us all with her eye-patch, painted-on beard, and knife-in-mouth spot-on pirate imitation. Some nights, after-dinner entertainment was mellower and mood setting, including a viewing of the 1935-version of the film Mutiny on the Bounty shown on deck and another evening, a fascinating short documentary called Around Cape Horn with footage of a tall ship in a storm in 1929. 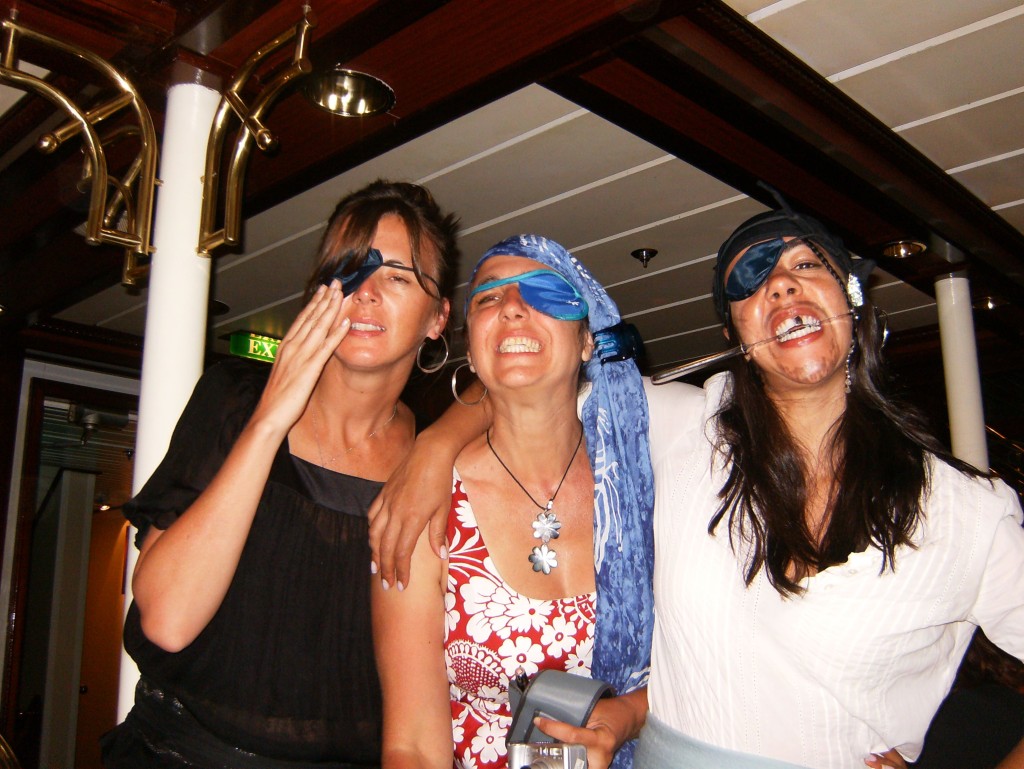 A big part of the Star Flyer’s appeal is the accessibility and friendliness of the crew. The captain and his staff welcome questions and expect them, and passengers are periodically invited to climb the masts and help heave the lines. We enjoyed harmless flirtations with Frederic and jokes with the poker-faced Vitaliy, a navigation officer form the Ukraine. The three young Swedish water sports assistants were popular, not just for their boy-band looks, but for their helpful attitude; they showed no impatience with three 40-somethings who couldn’t water ski quite as well as they remembered.

The open-air Tropical bar on deck is the ship’s social hub. We were definitely among the youngest passengers on board by a couple of decades, but no matter, it was a young-at-heart, outdoorsy crowd who enjoyed mingling over mai tais and sharing stories of shark sightings and dolphin encounters. 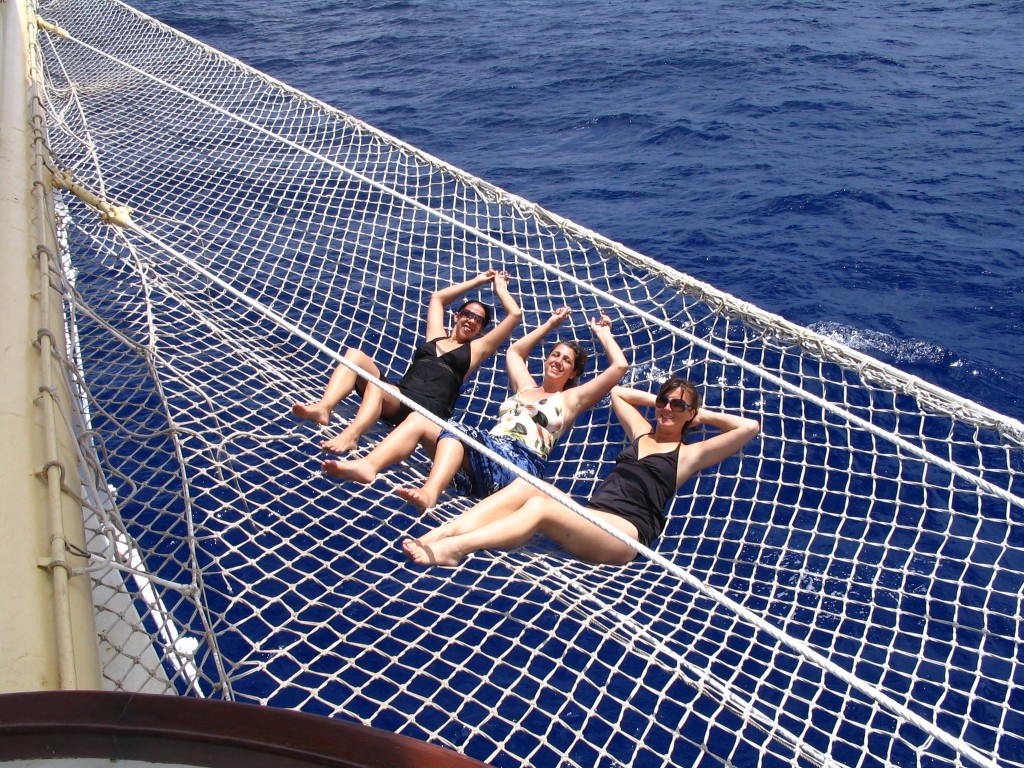 When some down time was called for, we hibernated in our cozy little cabin for a snooze or a gab fest. I claimed the bunk that folded down from the ceiling, while my two friends took the pair of beds below. The nautical décor was cute — navy blue carpeting with golden knots — and the storage space was adequate for Chrissy’s extensive girly dress collection, my mishmash of linen and denim, and Rachael’s practical earth-tone duds.

We didn’t mind the tight quarters one bit, after all togetherness was the whole point and French Polynesia needless to say, was the ideal rendezvous.