A-Rosa started up in 2000 for a European clientele that was and still is heavily German-speaking. Then in 2013, some of the large fleet was dedicated to the English-speaking market increasing to six in 2018, yet keeping the European flavor, so it’s a different kettle of fish from a strictly American market. On these cruises all announcements and printed materials are in English and German.

Passengers: For the riverboats dedicated to the English-speaking market, passengers hail from Canada, the U.S., Australia and Britain. While the family market is not large, there are cabins with extra berths for children. The average passenger will be more active if not younger than the norm.

Passenger Decks: Four decks with two main cabin decks, one shared with the forward lounge/bar and dining room. No elevators.

Price: $$ – Rates are Premium All Inclusive *see below. A second Basic level is only available on last-minute bookings.

Included features: Quite a lot: all gratuities on aboard and ashore, all alcoholic and non-alcoholic drinks at the bar throughout the day and at meals, bottled water in cabins, free WiFi available throughout including cabins, laundry and ironing service, and bicycles. Children (2-15) travel free.

Itineraries: A-Rosa concentrates on cruising the major rivers in Western Europe: Rhine/Moselle; Main/Danube; Rhone/Soane; and Seine. Cruises last from 3 to 16 days and operate from March through December and a few into early January. With many cruises just 3 and 4 days, consider them a sampler and build a larger itinerary by adding hotel stays in the embarkation and/or disembarkation ports.

Why Go? A-Rosa is a good starter line for a European river experience, perhaps beginning with something as short as four or five days, and adding your own land extension before and after. If you like the concept, then you will have lots of additional choices.

When to Go? Off-season spring and fall will have fewer crowds ashore at the best known destinations, though larger cities can often absorb the summer numbers reasonably well.

Cabins: All cabins are decent-sized (156 sq. ft.), outside, and most have large windows that open to French balconies where you can stand at the cabin railing; a few of the highest priced suites will have step-out balconies as well as the French-style. Beds are twins or queens, and some cabins have a Pullman berth or a sofa convertible to a bed. The cabins on the lowest deck will have small windows high in the room. Here the view is almost water level.

Public Rooms: The vessels have a single forward lounge with 180-degrees of vision, a wine bar and additional deck space on the top or Sun Deck. 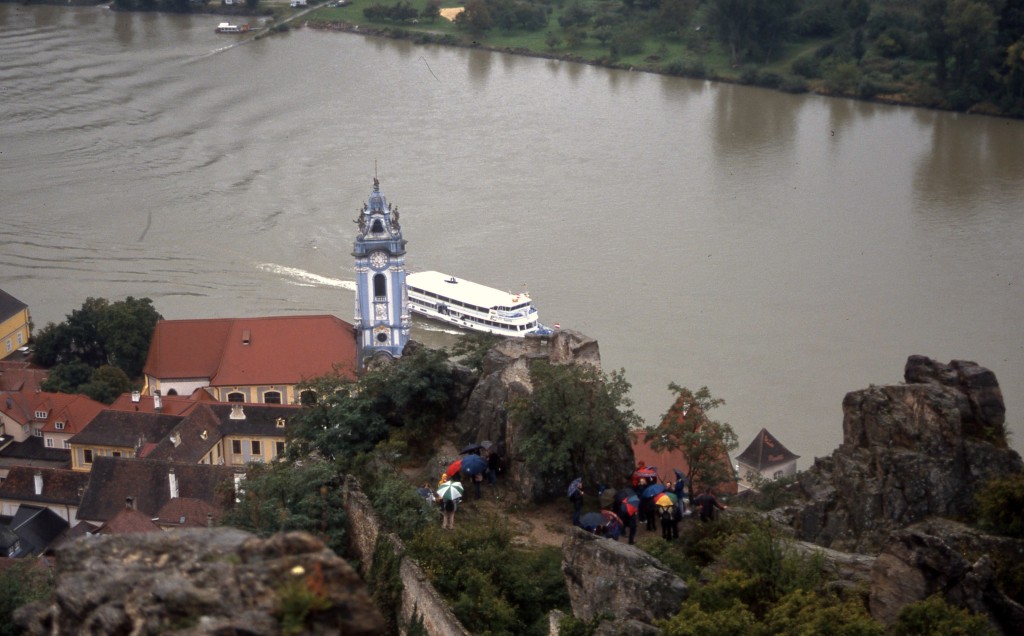 View of the Danube from Durnstein, Austria. * Photo: Ted Scull

Dining: A-Rosa emphasizes buffet dining both inside and out on deck at all meals, while at most dinners, passengers may choose to be served. Buffet stations will have chefs preparing special dishes. The menu is Mediterranean. Seating is open at both venues with outdoor dining available for all meals, subject to the weather.

Activities & Entertainment: On the boats, the top deck activities include a small pool, giant chess pieces and board, shuffleboard and a putting green. Musical entertainment comes aboard in afternoons and/or evenings. Ashore, taking advantage of the bicycles will allow you to range freely and independently in ports especially where this activity is recommended. Guided bicycles tours are also offered in some ports plus hiking and kayaking.

Special Notes: Single supplements waived on many sailings, and kids sail free. The spas are unusually well-equipped and larger than average.

Along the Same Lines: Other riverboat lines offering European itineraries at moderate rates.