How Windstar is Stretching Three Ships

What’s being called the most challenging cruise ship retrofit ever attempted is taking place right now in Sicily. There, at Fincantieri’s Palermo yard, Windstar Cruises’ Star Breeze has been cut in half so a new midsection could be inserted. 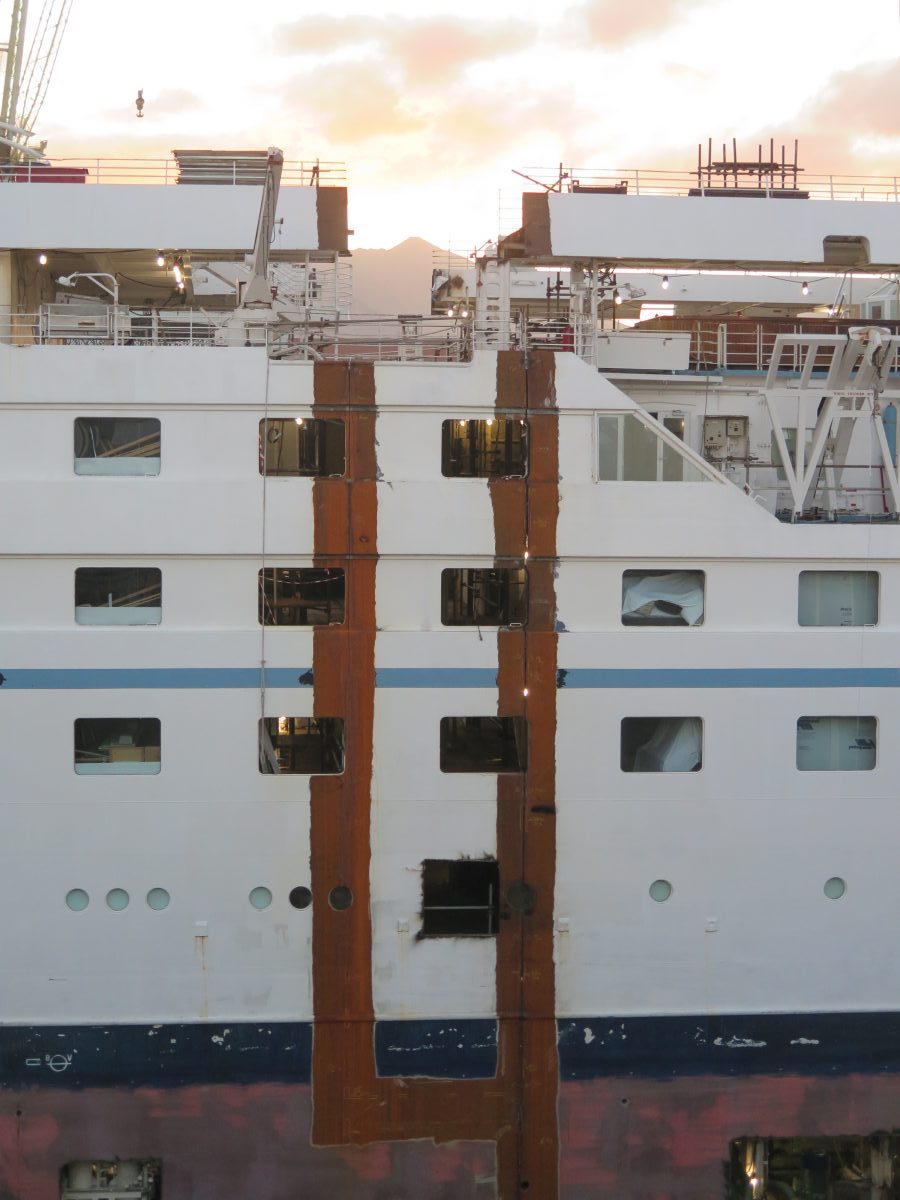 The two cut lines in the midsection of Star Breeze. * Photo: Anne Kalosh

Star Breeze is the first of three ships to be “stretched” in Windstar’s $250 million Star Plus Initiative. Sisters Star Legend and Star Pride will follow.

The project will add a host of new cabins and features to these 30-year-old vessels, giving them a new look and a new lease on life. Plus, their new engines will improve fuel efficiency and environmental performance while gaining 4 knots of speed to enable new, far-flung itineraries.

The dry docks are being carried out in a remarkably tight window — just four months per ship.

The new midsection for Star Breeze was glided into place in just half an hour. * Photos: Anne Kalosh

The project will add 50 suites to each vessel, re-do all accommodations and expand dining choices, the spa, fitness center and pool deck. 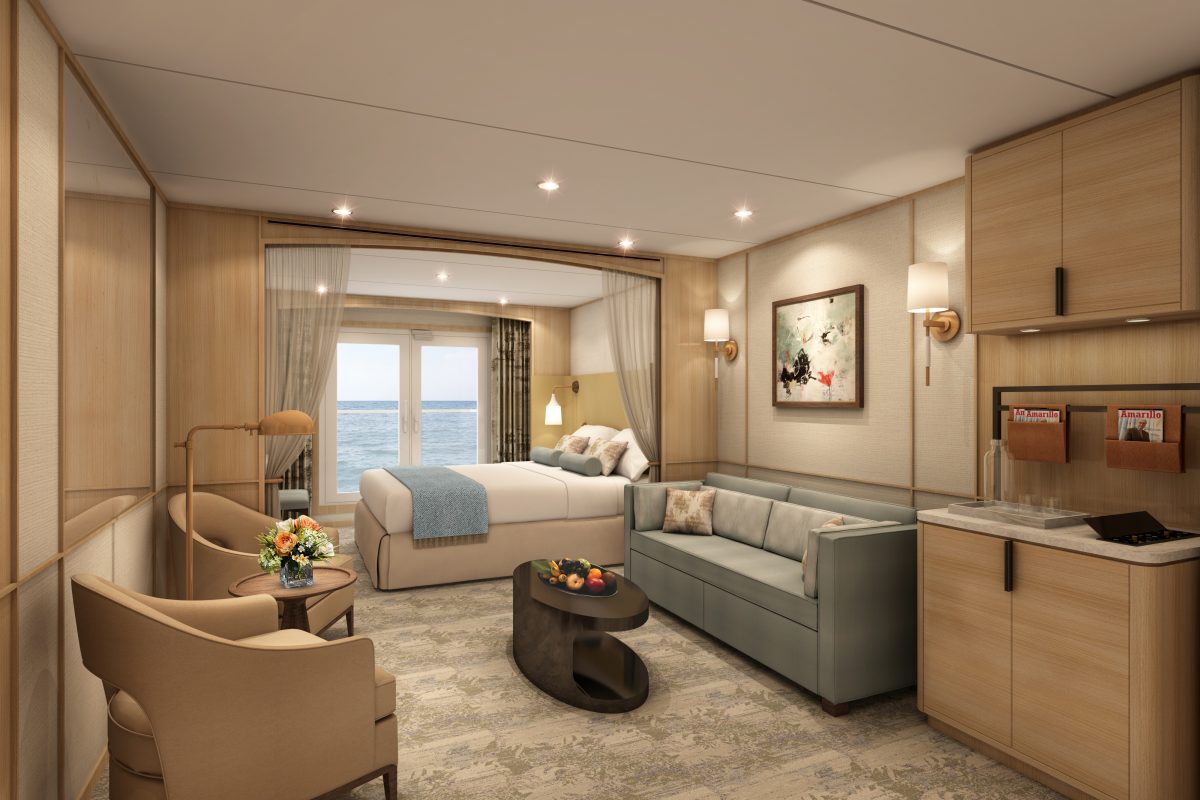 In the new suites, the bed will be next to the balcony, to open up the look of the room when entering. * Rendering: Windstar Cruises

Two new restaurants include the eclectic, Spanish-styled Cuadro 44 by Anthony Sasso, one of the youngest chefs ever to earn a Michelin star, and the modern, alfresco Star Grill by global grilling authority Steven Raichlen. 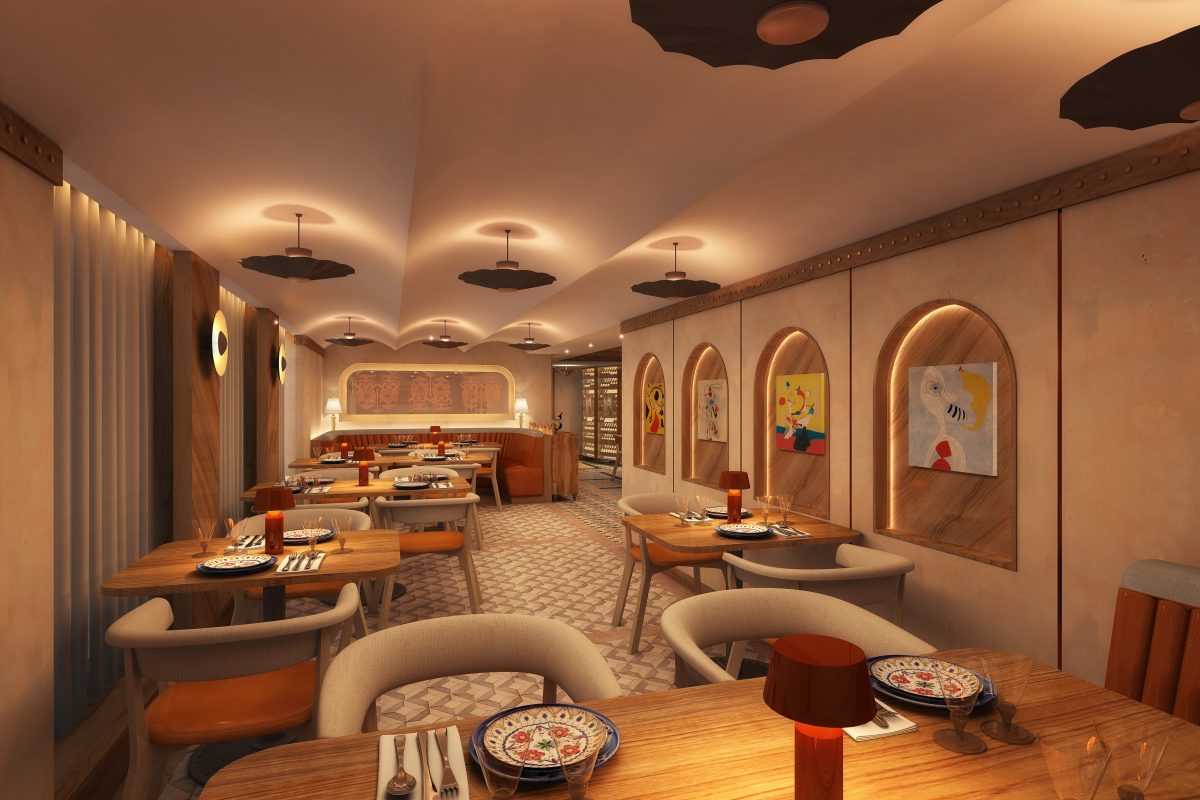 Star Grill will be found on the top deck, with outdoor seating for 95 and a bar that serves signature cocktails. A new swimming pool with a waterfall feature and a hot tub will be added, and there will be space for a five-piece band on deck. 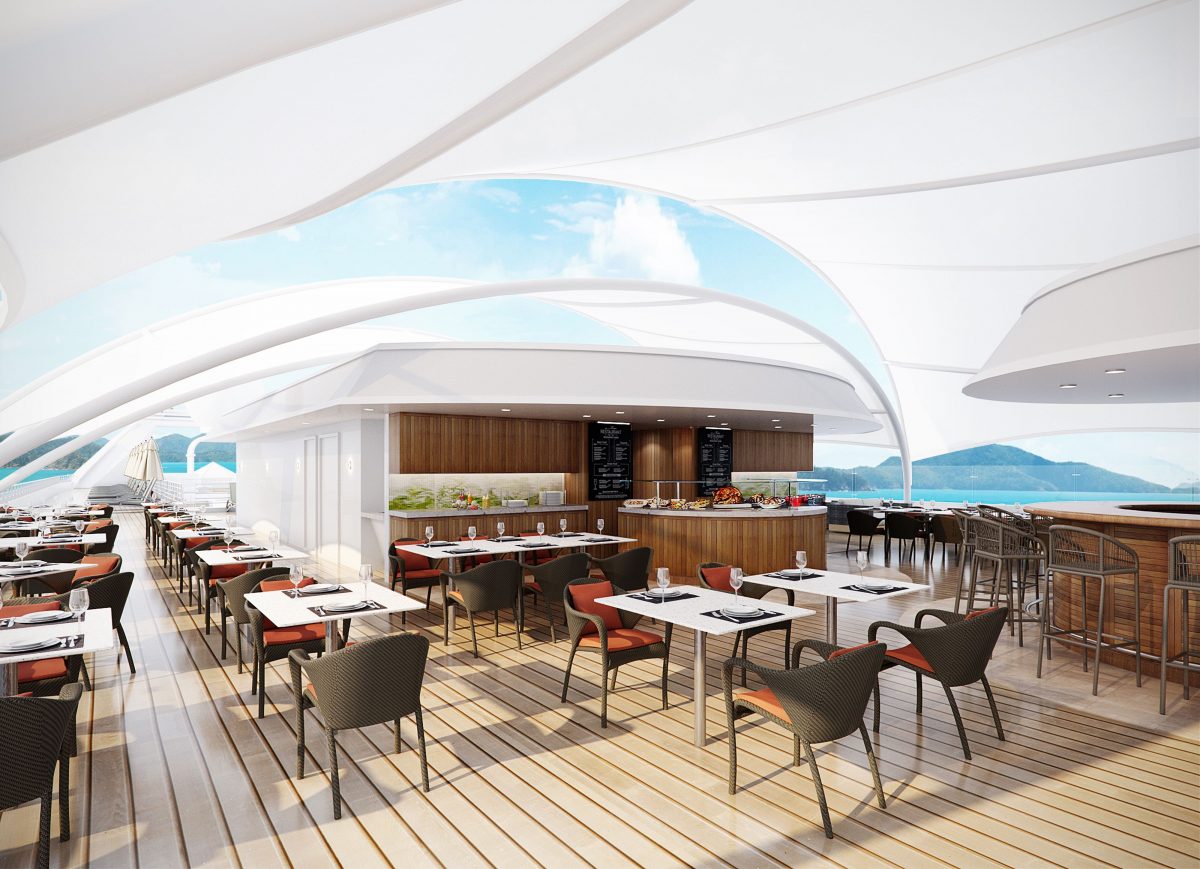 The Star Grill by Steven Raichlin will be a new casual, alfresco restaurant on the fully transformed top deck. * Rendering: Windstar Cruises

In addition, each ship will be getting a new high-end retail shop. All bathrooms will be replaced. And the vessels will be fitted with the latest safety systems and covered lifeboats.

“It’s not just a ship lengthening. It’s a complete transformation,” said John Gunner, vice president of expansion projects for Windstar and a veteran of numerous new buildings during his earlier long career with Princess Cruises. 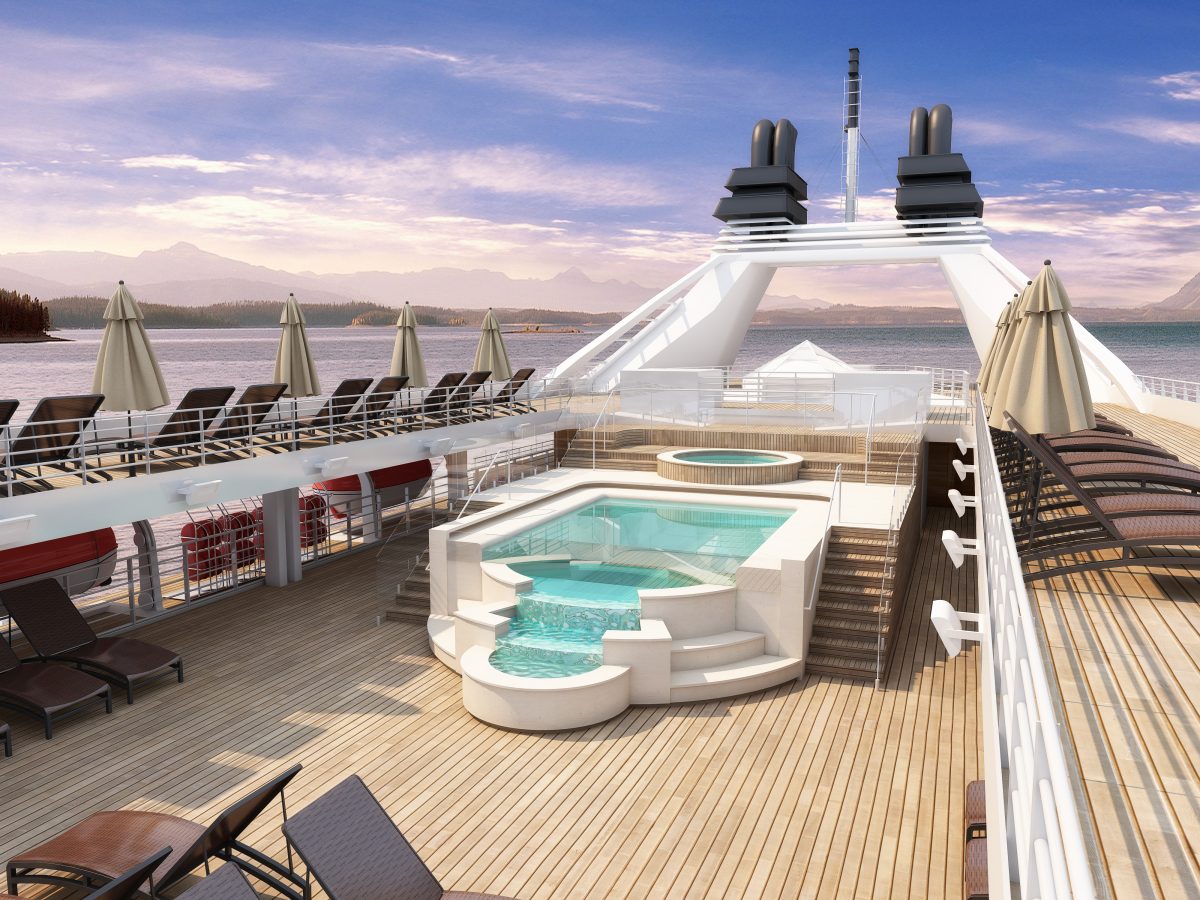 The Deck 7 pool will be completely redone, with a new waterfall feature and a hot tub. * Rendering: Windstar Cruises

As far back as 2005, when Holland America Line owned the three ships, operating them for its Seabourn brand, there had been discussions about stretching them. After they were acquired by Xanterra, the parent company of Windstar, the idea came up again. Delaney said Xanterra had also considered ordering new ships but that lengthening “made so much more sense,” especially given the limited yard slots for new builds.

While ship stretches are not rare, they’re far from routine. Fincantieri is known for this type of work, and the Palermo yard has completed 34 lengthenings, including Silver Spirit, MSC Cruises’ four-ship Renaissance project (MSC Armonia, MSC Sinfonia, MSC Opera and MSC Lirica), ferries and barges.

Meticulous planning goes into solving complex engineering issues, and extensive design work is needed to ensure the midsection meshes well with the style of the rest of the ship. Ray Chung, director of design at The Johnson Studio at Cooper Carry in New York, created the modern design aesthetics for the new public spaces and suites. 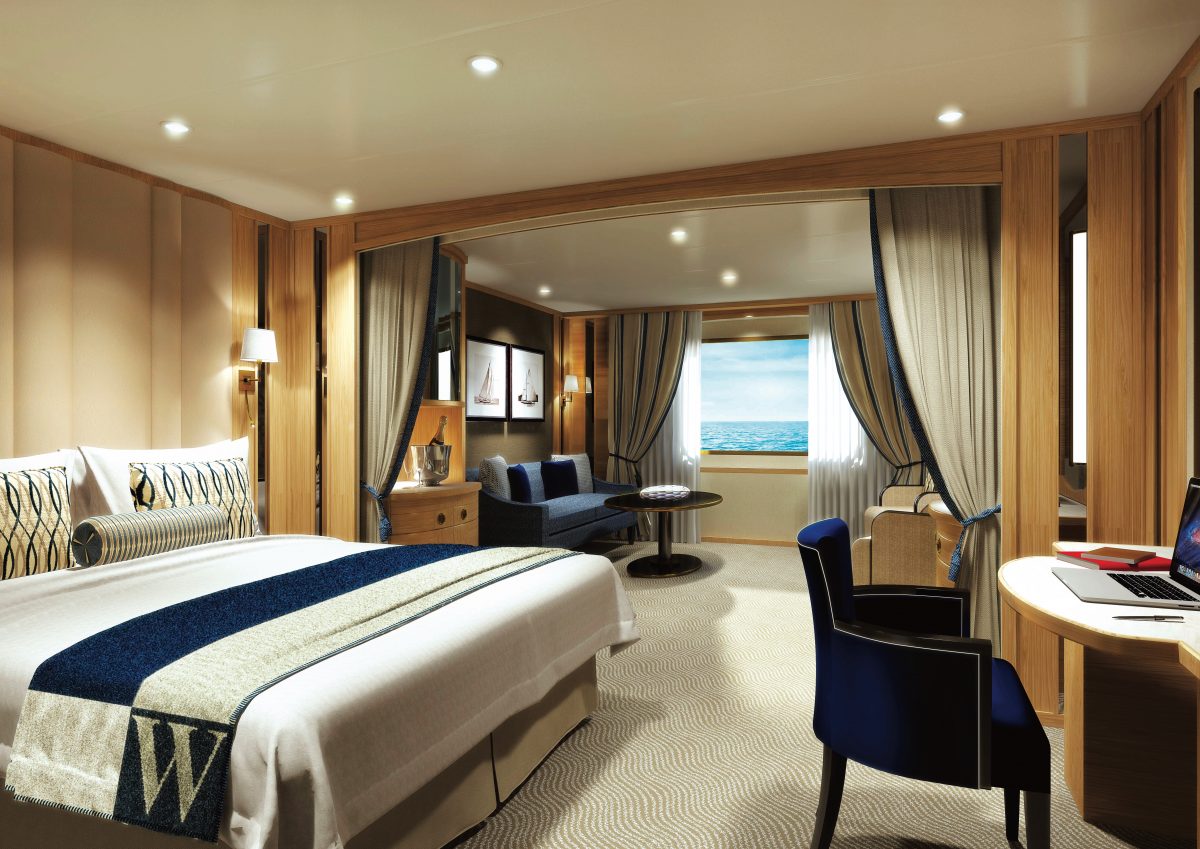 Seven Bergen engines (four for propulsion and two for electricity needs) are coming out of each ship. Going in are four Wärtsilä 26 diesel engines (two V12 for propulsion and two 8-cylinder for electricity) that meet the highest (Tier III) nitrogen oxide emissions standards. The ships also will be fitted with selective catalytic reduction converters to further reduce harmful exhaust.

How is a ship “stretched” anyway?

Star Breeze arrived at Palermo on Oct. 7, sailing into Fincantieri’s enormous dry dock there. The new midsection, which had already been assembled, awaited, looking something like an apartment block. The hull and first three decks of the midsection were built at Fincantieri’s Trieste facility, while Decks 3-8 were built in Ancona, where the lower and upper sections were assembled and then towed to Palermo.

When the water was drained from the dock, Star Breeze was perched on 16 skid shoes, each supporting 250 tons equally to maintain the ship’s center of gravity. 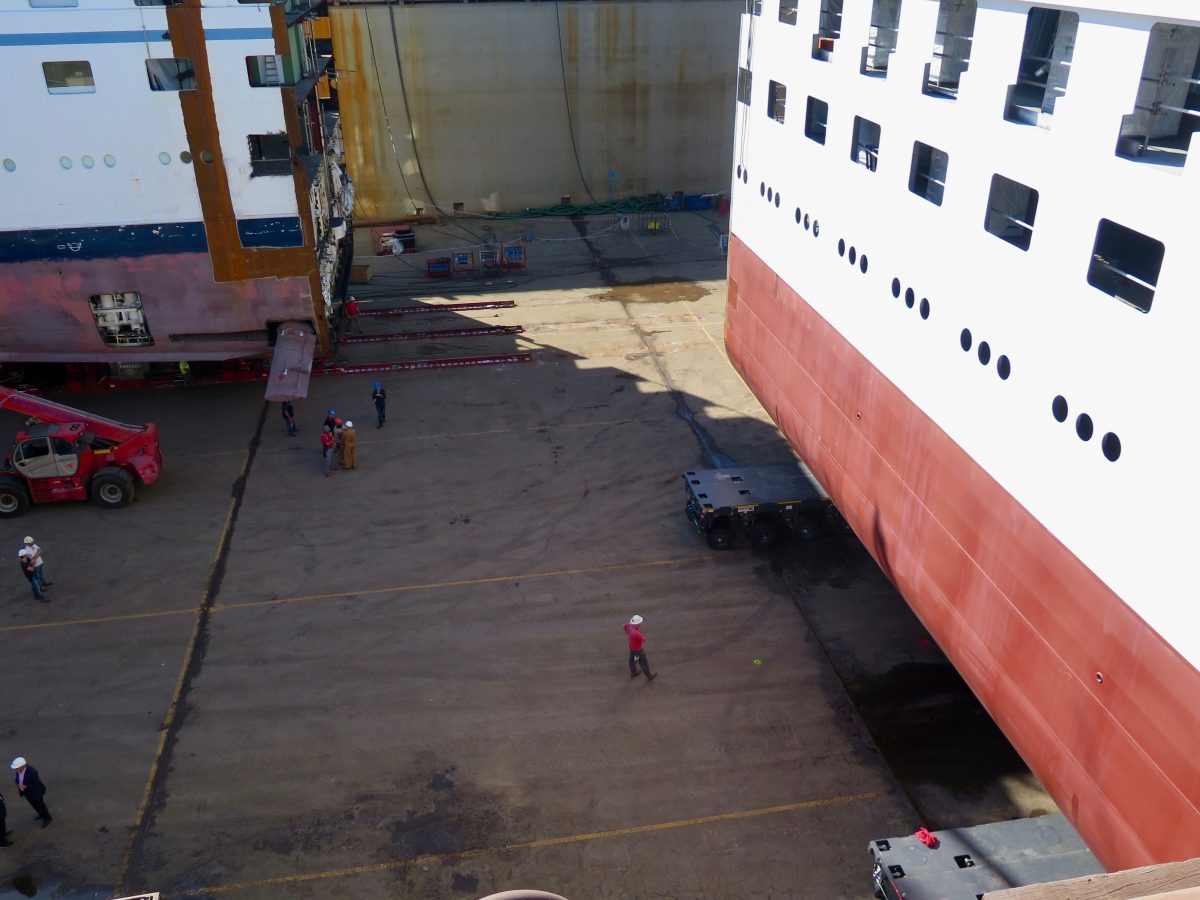 Imagine standing in the dock as the massive midsection is moving toward you, as this worker did. * Photo: Anne Kalosh

On Oct. 8, workers began removing pipes, cables, carpet and cabin components, and cleaning the diesel oil tanks. Cut lines were marked on the hull. On Oct. 14, welders began their work.

The final welding cut to Star Breeze — 10 centimeters — was ceremoniously completed by Windstar President Delaney on Oct. 16, before a small gathering of U.S. media and top travel advisor partners, Windstar executives, Fincantieri brass and shipyard workers. Everyone cheered, and the prosecco flowed. 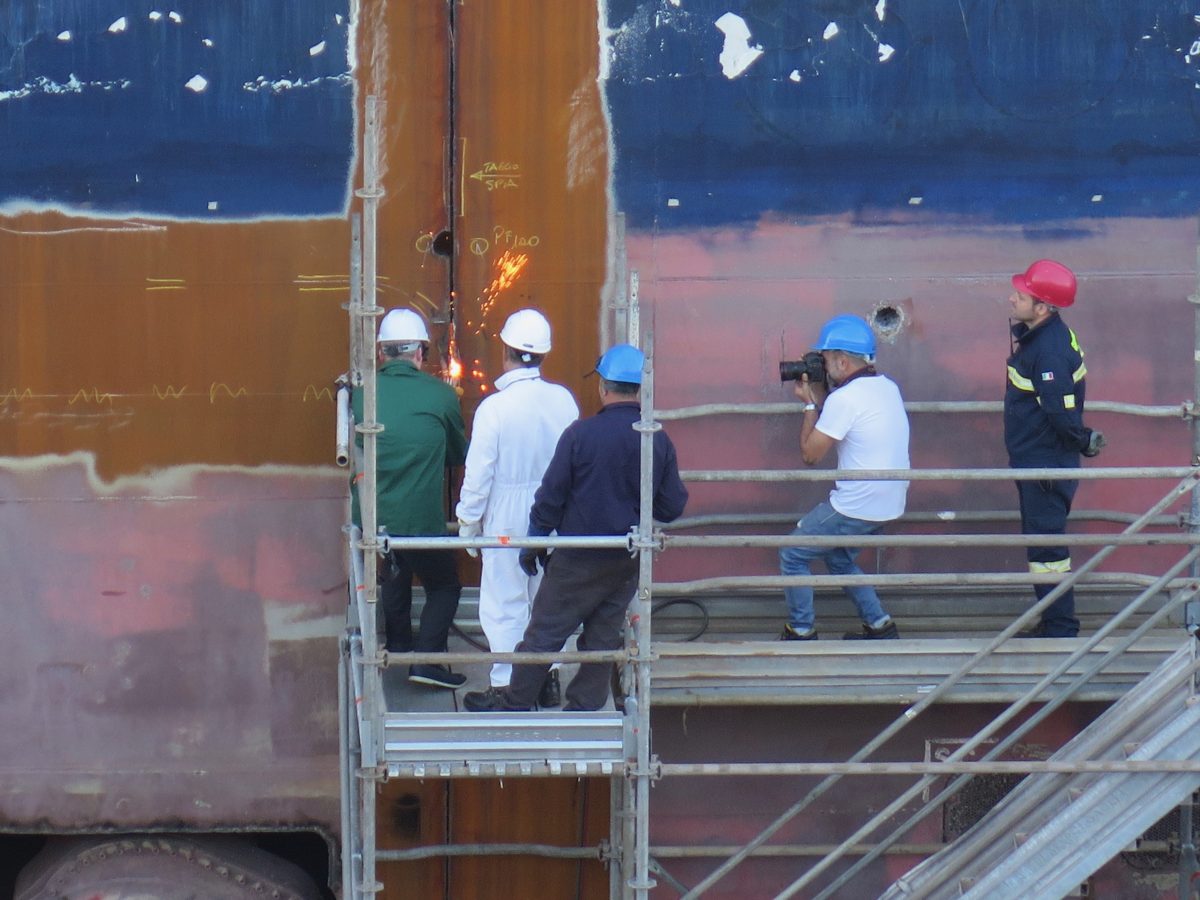 The next day the 25.6-meter/84-foot prefabricated midsection was glided into place between the two halves in the dry dock, an operation that took just half an hour. This was witnessed by a bigger crowd of local media, dignitaries and workers in hard hats. Everyone watched with the concentration and suspense of seeing a spaceship launch.

Delaney stood in the dock along with a handful of supervisors. They were like ants as the 750-ton midsection slowly advanced, pivoted then turned into the open space between the bow and stern portions. 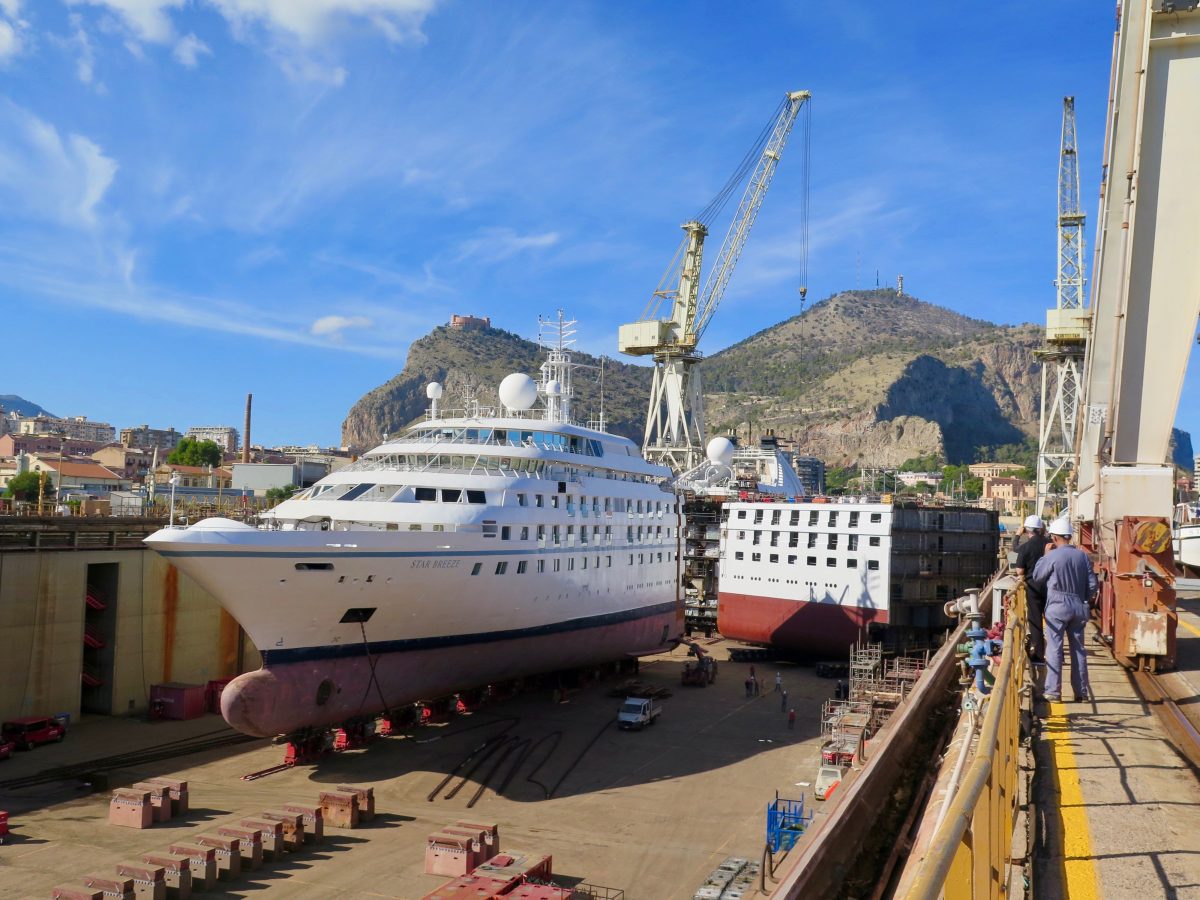 ‘The baby is born”

Watching from above, Fincantieri Project Engineer Isabel Landzic broke into a huge smile. “The baby is born,” she said. “This was a yacht. Now it’s a cruise ship.”

“My little baby is becoming a big baby,” Prelog added. “It will not be very big but quite different. It’s a good size, and we can offer a lot of new things.” 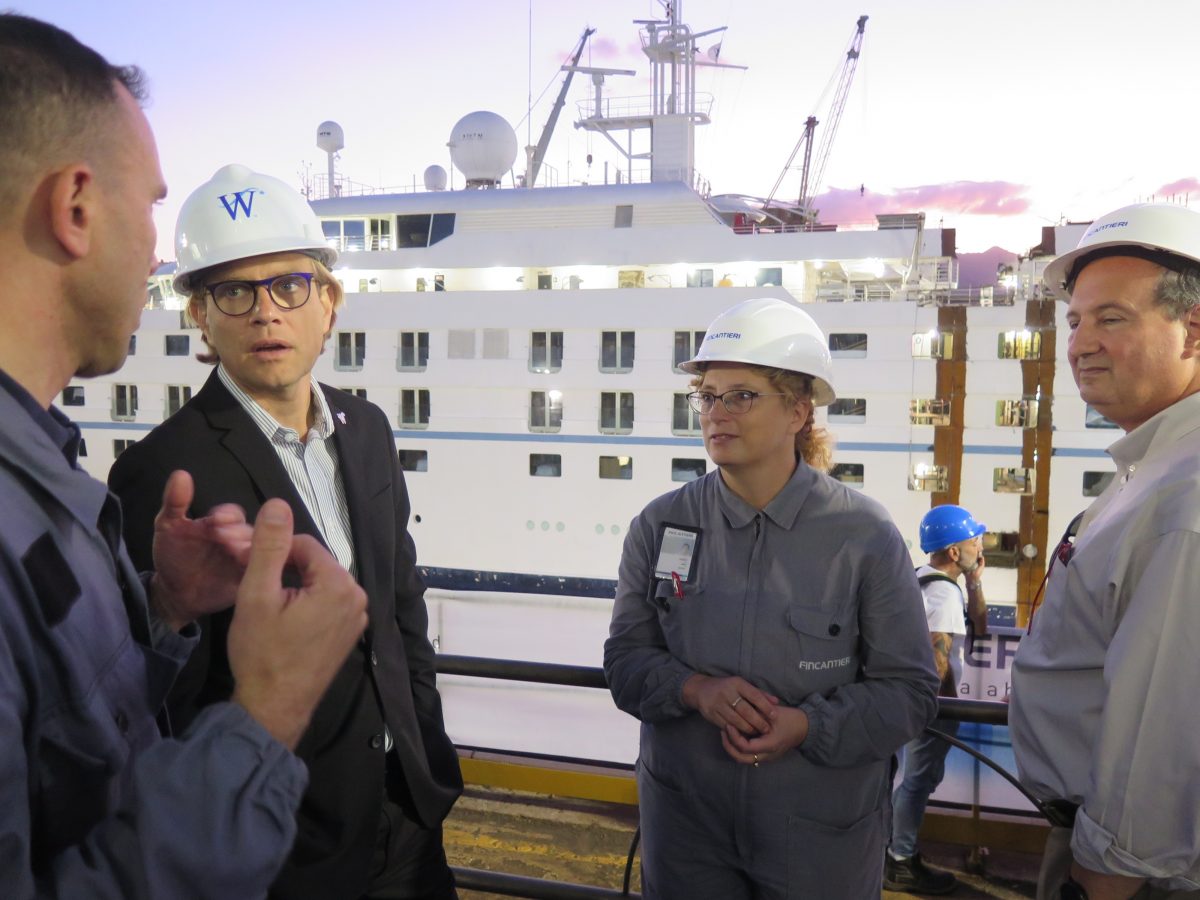 Also on hand, Van Anderson, co-founder of Avoya Travel, noted his company had been booking travelers on Star Breeze since it entered service as Seabourn Spirit in 1989.

“It’s getting a new life,” Anderson said. “It feels good to be able to continue to sell a ship with history instead of putting her out to pasture. We don’t do that with hotels. We stay in hotels and resorts because of their history. 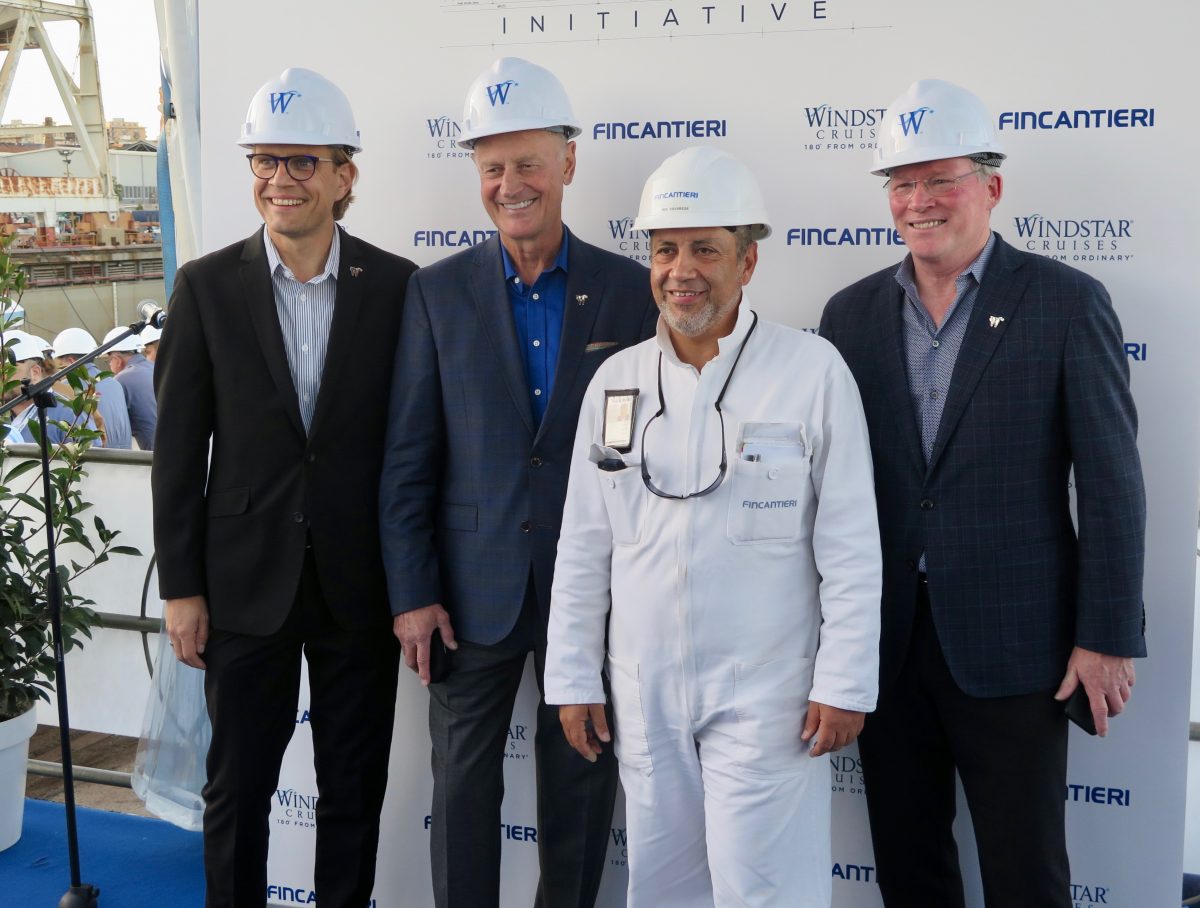 “Small is the new big”

“There’s nothing wrong with new ships. We need growth,” Anderson continued. “But small is the new big. It’s a new opportunity.”

During the next months, the ship will be welded together again. Thousands of pipes and cables will be painstakingly connected, sensors installed and interiors outfitted.

Star Breeze is due to be completed in February with a sailing from Barcelona on Feb. 20. Star Legend will be finished in June 2020 and debut on July 2 in Barcelona. And Star Pride will emerge in November 2020, with its first cruise embarking Nov. 20, also from Barcelona.

Star Breeze was introduced as Seabourn Spirit in 1989, while Star Legend debuted in 1992 as Royal Viking Queen and subsequently sailed as Queen Odyssey and Seabourn Legend. Star Pride was built as Seabourn Pride in 1988.

A bird’s-eye view of Star Breeze with its newly inserted midsection in the dock at Palermo. * Photo: Windstar Cruises 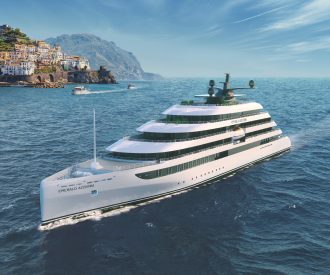 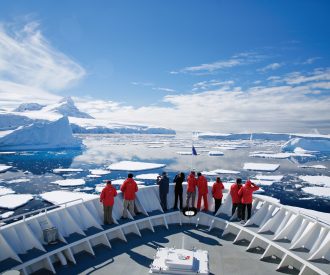 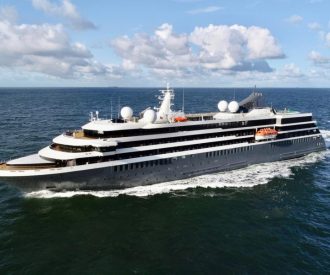