Slowly Down the Mekong aboard a Pandaw River Boat

When an old high school friend decided to visit me in Singapore to catch up and travel together somewhere in the region, I put on my thinking cap to come up with something really special and interesting.  I surfed around and came up with Pandaw Cruises, a company I am now very familiar with, but at the time had never heard of before. The company operates a fleet of 10-to 66-passenger boats all built since 2002 as replicas of the Irrawaddy Flotilla steamers that plied Burma’s Irrawaddy River a century ago. 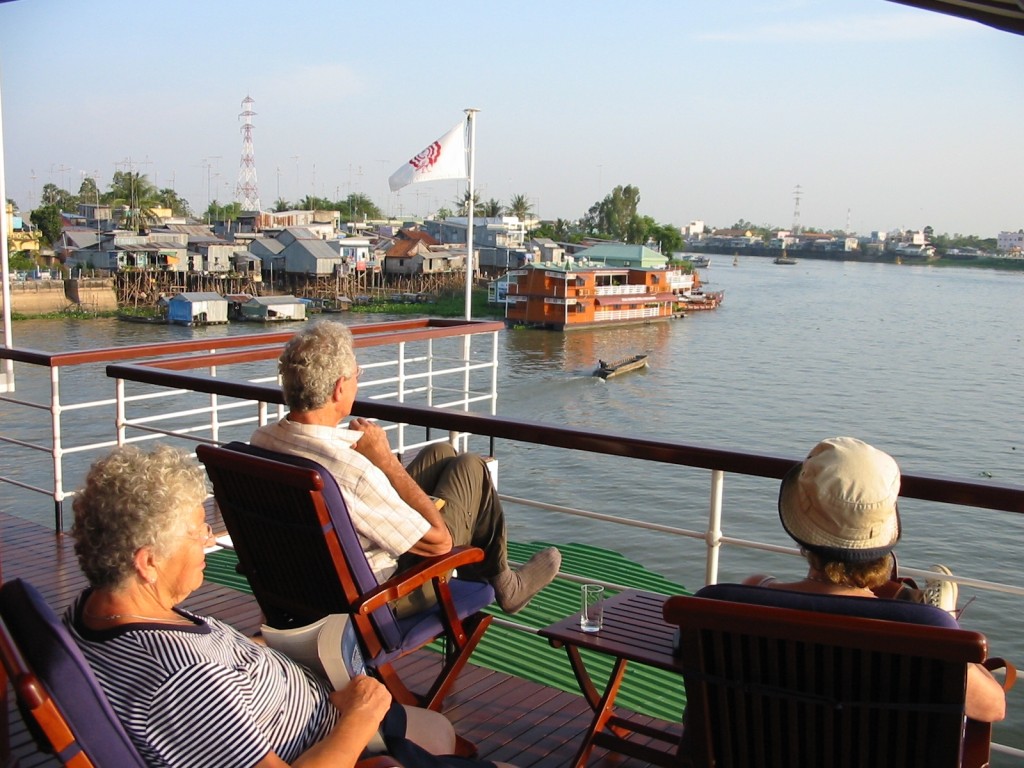 Watching the world go by from the bow of the Orient Pandaw. * Photo: Heidi Sarna

After just a few minutes on the Pandaw website, I knew I hit the jackpot. I signed us up for a 7-night cruise down the Mekong River and its tributaries through Cambodia and Vietnam, with an extra hotel night on either end in Siem Reap, Cambodia, and Ho Chi Minh, Vietnam. We stayed at the beautifully rustic Angkor Village Hotel in Siem Reap and spent a day and a half exploring the amazing Hindu and Buddhist temples built during Angkor’s golden era from the 9th to 13th centuries.

Our guide, Mao So Kheim (with www.indochinapartnertravel.com), was excellent and we trekked with him over the gnarled roots of ancient banyan trees and up super steep stone steps to get close-up views of giant temples carved with Hindu deities, scenes from the Ramayana, and the 216 giant and serene faces of the god-king Jayavarman VII. With so much to see, we barely noticed it was 90 degrees in the shade. 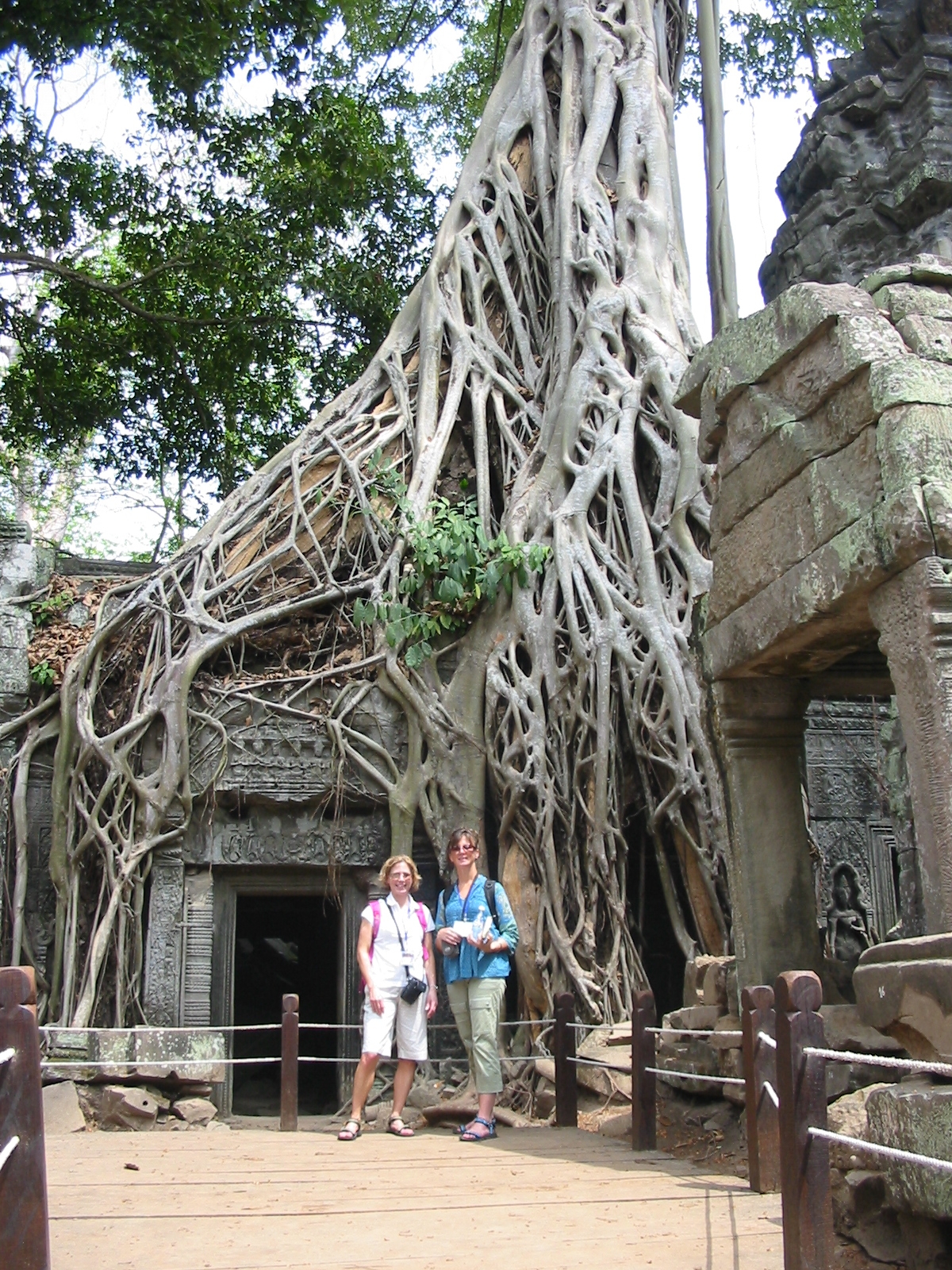 All Aboard a Pandaw River Boat

The next day we were to embark the 60-passenger Orient Pandaw. Because we were traveling in March, during the relatively dry, low-water season (seasonal fluctuations in the water level of the Mekong river system vary between 6 and 10 meters), we couldn’t board the ship in Siem Reap. The four-hour bus ride south to a village along the southern edge of Tonle Sap lake, where we boarded the boat, was a great opportunity to see the countryside and small towns of Cambodia.

The guide, who would be sailing with us for the Cambodia half of the cruise (another excellent guide joined us for the Vietnam portion), narrated. Highlights included a bathroom break at a roadside restaurant where our group was met by a bevy of local women selling snacks. They tempted us with heaping trays of fried tarantulas, crickets and frogs. In a country as poor as Cambodia, practically everything is considered food, poisonous spiders not withstanding.

When we reached the port, we walked to the riverbank and peered down at the Orient Pandaw, its stubby bow nudged up against the muddy banks of the Mekong River. A smile spread across my face at the thought of our impending adventure on this Pandaw river boat. The gangway was a wooden plank connecting the boat to the bank, where it was moored not to a concrete pylon or pier, but to the sturdy trunk of a tree. Our home for the next week resembled an old-time steamboat, minus the paddle wheel, with three main open-sided decks and an air of utility. 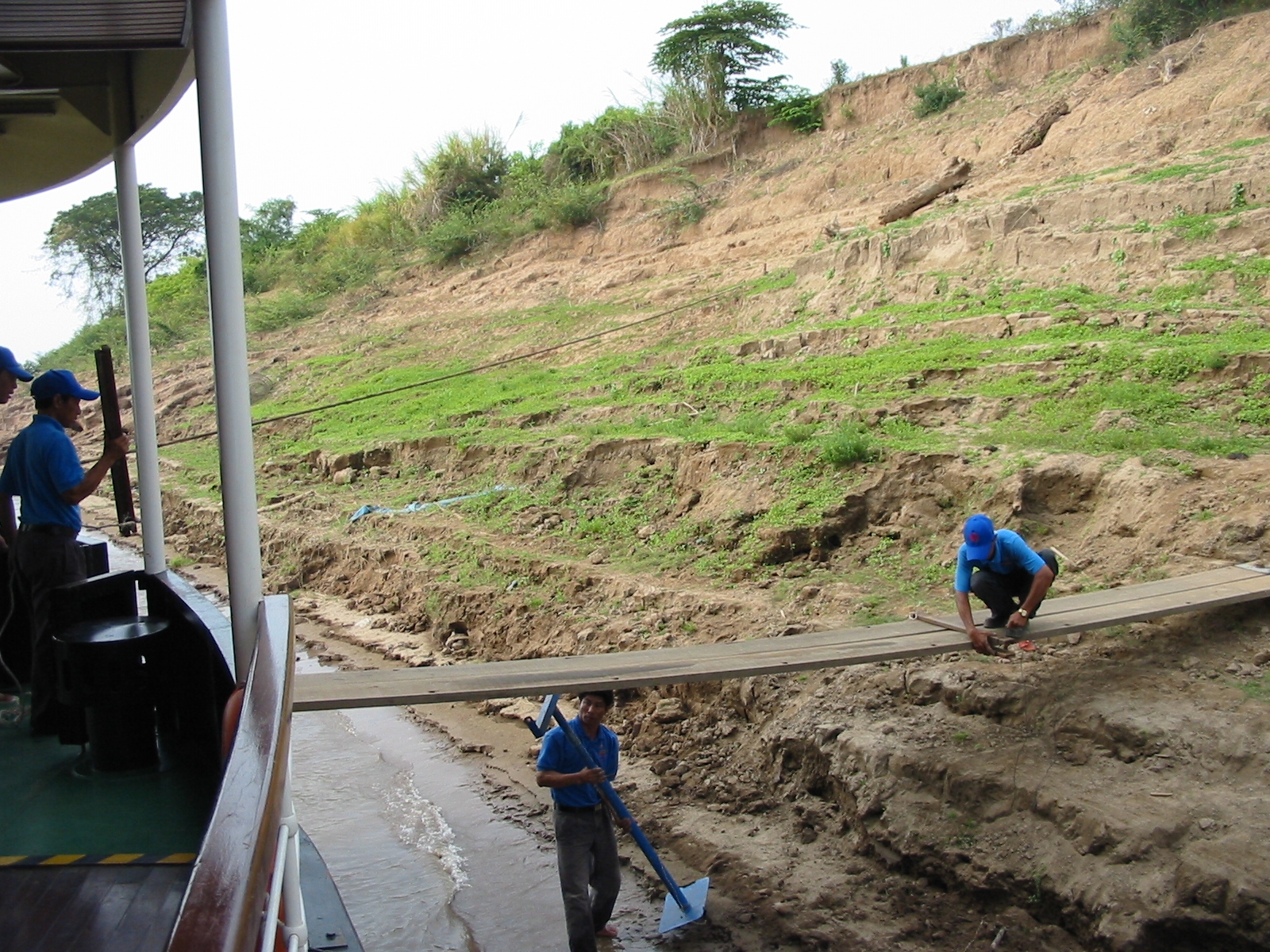 While the year-old Orient Pandaw has a retro look, teak wood and brass fittings, the beauty of a replica is the marriage of old and new. Modern creature comforts include roomy air-conditioned cabins that open directly to the outside promenade deck. Cabins have plenty of storage space and attractive bathrooms with large showers.

The windowed open-seating restaurant is configured with tables for eight and serves a combination of buffet-style and ala carte meals, from delicious nasi goring to Khmer fish curry, glass noodles with pork and spicy beef salad, as well salads, pastas, cold cuts, cheese, fresh bread and other continental staples for the mostly European and North American guests. Considering the mix of passengers, the food wasn’t heavily spiced (not enough for my palate at least), but nothing some chili sauce or a dash of pepper couldn’t remedy. 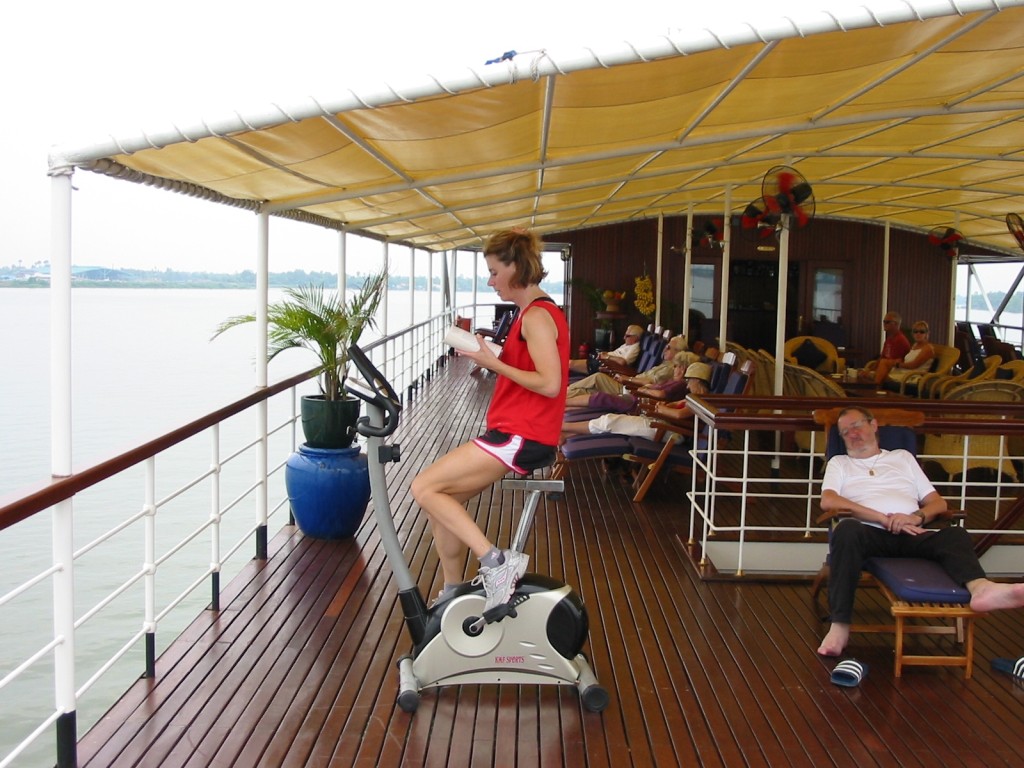 When we weren’t eating or sleeping, the place to be was a padded teak chaise lounge on the open-air observation deck to watch the landscape float by. While sailing we were close enough to shore to wave to children, admire sampans piled high with coconuts, and watch a solitary figure in a conical hat paddling a skiff along the ubiquitous groves of water hyacinths. The guides mingled and answered our questions, guests enjoyed cold beers and drinks from the bar, and a dedicated few watched the scenery unfold from the seat of the stationery bike, the ship’s lone piece of exercise equipment.

Massages were offered on deck, and also below decks in a dedicated massage room (some Pandaw boats have a masseuse and some don’t), as well as port lectures and occasional activities such as a spring roll-making demo. Evenings, local folk dancers and singers performed for us or better yet, we enjoyed several culturally-relevant movies in an indoor lounge. Watching The Killing Fields, The Quiet American and Indochine in the places in which they were set made them all the more poignant. 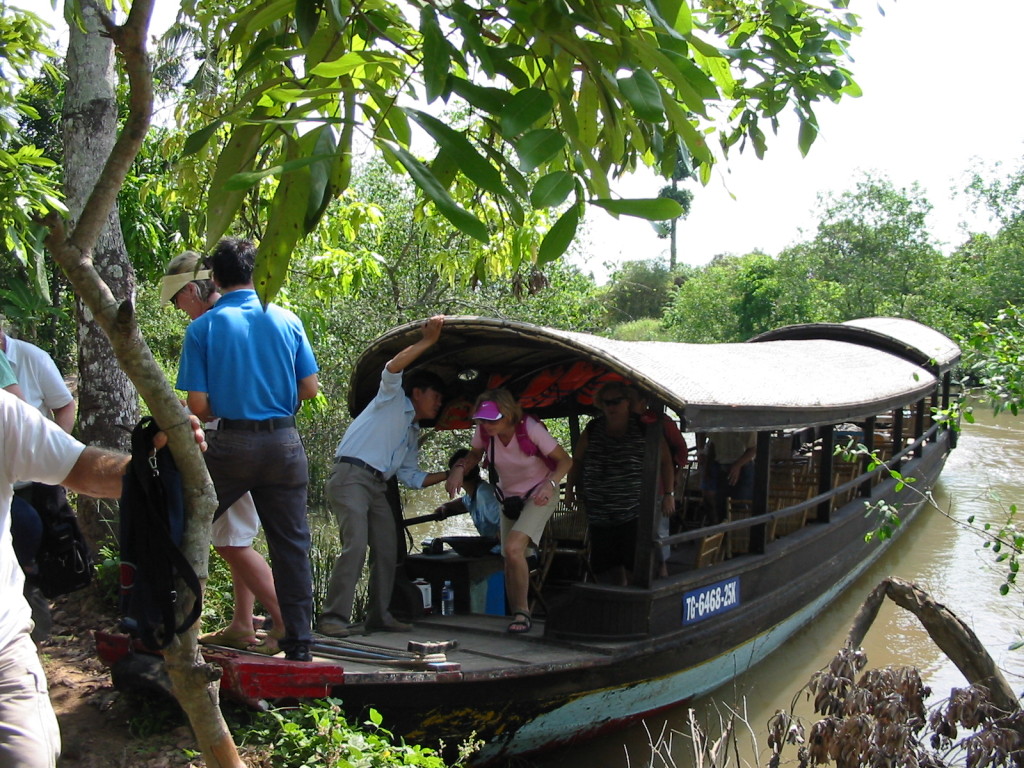 Climbing out of a local sampan to explore on shore • Photo: Heidi Sarna

Each day we made one or two excursions from the ship, often via local sampans that pulled up alongside our anchored boat. On the Cambodian side of the river in Kampong Chhnang and Kampong Cham, we traveled by sampan past floating wet markets and walked through rural villages to see the 12th century Angkorian temple of Wat Nokor as well as ancient Cham shrines (the Cham are one of the region’s ethnic minorities).

We visited an orphanage supported by Pandaw and distributed paper, pencils and candy to the children. It was both a sad place — dusty and forlorn with a pair of net-less metal soccer goal frames in a field surrounded by drab concrete — and a hopeful one too, with smiling children greeting us as we stepped off the bus. I felt both joy and sadness. Who knows the horrors the children have endured in a country of extreme poverty, and where healthcare is poor and widespread corruption by the political elites is commonplace. 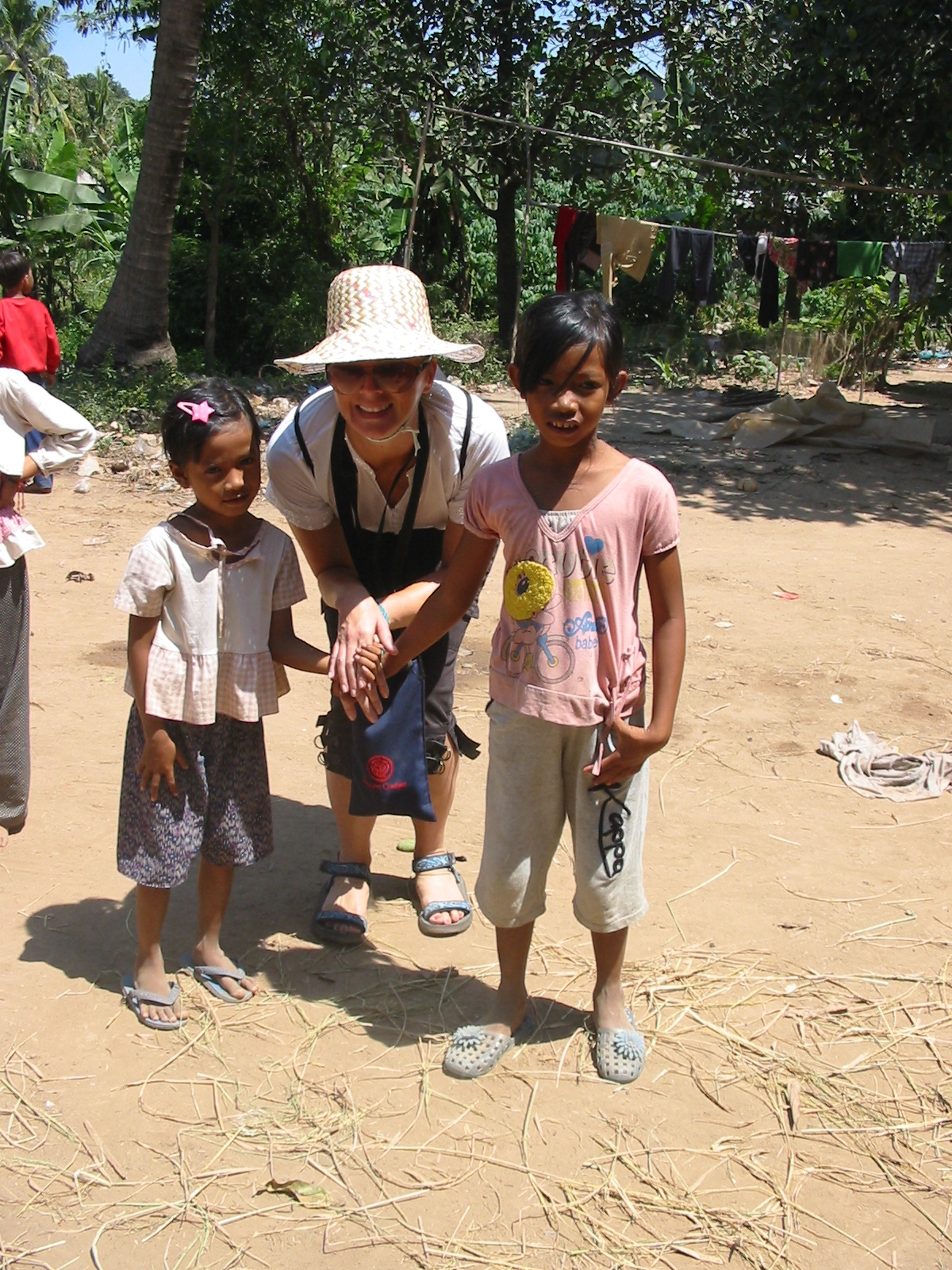 A Day in Phnom Penh

On our third day we docked in Phnom Penh, Cambodia’s capital city, where structures like the grand Buddhist Silver Pagoda temple (one of the few places Khmer artifacts weren’t destroyed by the Khmer Rouge) and charming French colonial architecture co-exist with grim reminders of the dreaded Pol Pot regime of the 1970s. We visited the notorious Killing Fields on the edge of the city where thousands of innocent people were murdered and buried as well as the Tuol Sleng Genocide Museum, formerly a prison known as the S21 Detention Centre, where more than 10,000 Cambodians of all ages were interrogated, processed and killed by the evil Khmer Rouge regime. In preparing for my trip I read a chilling but page-turning memoir of the horrible Pol Pot years by Loung Ung called First They Killed My Father. Her parents and two of her siblings didn’t survive the regime’s brutality.

The boat stayed in Phnom Penh late and that evening we traveled by bicycle rickshaw to a local spa for a great $9USD massage at the Amret Spa (#3, Street 57), followed by dinner at an atmospheric little restaurant nearby before heading back to the boat.

The next day we sailed across the border into Vietnam and noticed an immediate shift. Cambodia’s primitive wet markets and thatched huts were supplanted by the vigorous commerce of the Vietnam side. Sand barges carried their cargo to Saigon for export to Singapore and emerald green irrigated fields of rice carpeted the river banks.

From Chau Doc and Cai Be, we traveled again by sampan through the canals and backwaters of the main Mekong channel, wandering through local markets, checking out the action at a floating fish farm, snapping photos of a French Gothic cathedral in Cai Be and stopping for tea at the former Imperial residence, the An Kiet House. The group enjoyed visits to two factories, one that produced rice paper and coconut candy, and another, tiles and pottery.

Our weeklong river adventure ended in My Tho, near bustling Ho Chi Minh City. We stayed a night in Vietnam’s largest city at Le Duy, a non-descript but centrally located hotel on Nguyen Thi Nghia Street, visiting the War Museum, with its graphic photo collection, Chinatown, Reunification Palace (the site of the official fall of Saigon in 1975 and the end of the war) and the sprawling Ben Thanh market.

We also toured the famous Cu Chi tunnels an hour outside of the city, an impressive underground complex built by the communist Viet Cong during the Vietnam War. We spent our last evening of the trip at the open-air Rooftop Garden bar of the Rex Hotel, where journalists hung out during the Vietnam War. Though the singer crooning Italian ballads seemed out of place, all that mattered were the magical views of Ho Chi Minh City. It was the perfect place to reflect upon our Pandaw adventure.

Note: Sometimes other boats in the fleet, like the 48-passenger Mekong Pandaw, do the 7-night route described in this feature, and they all offer a very similar experience to the Orient Pandaw.

Fares include all shore excursions, meals, non-alcoholic drinks, and entrance fees to museums and other sites.

For booking info, go to the Pandaw site. 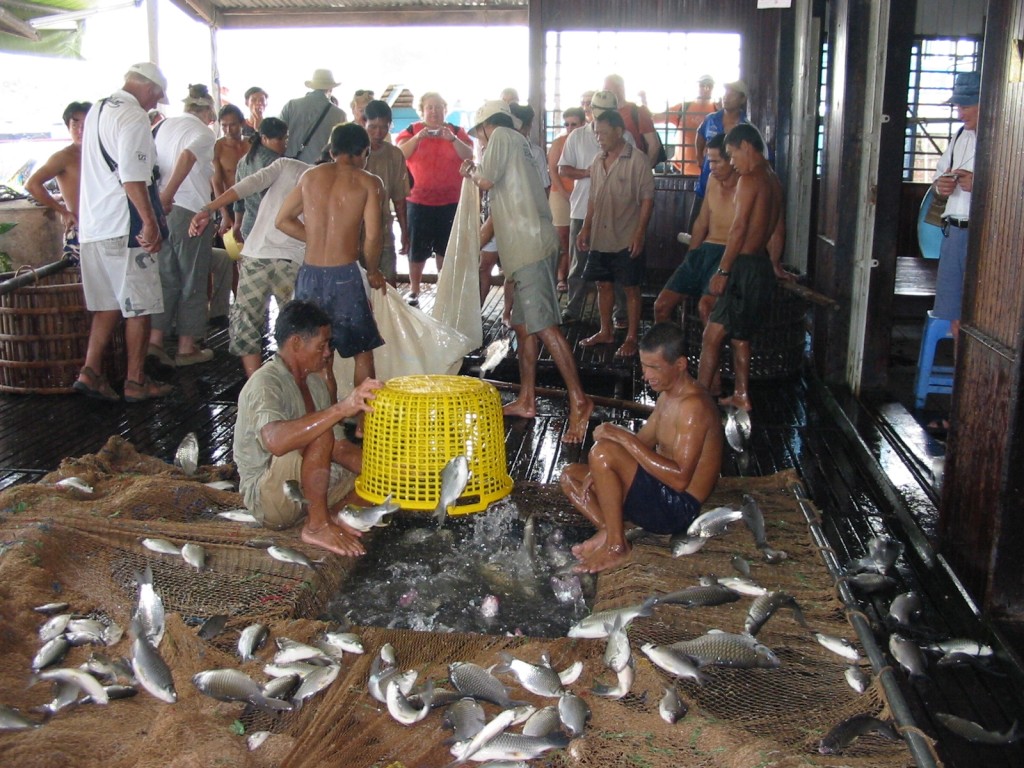 A visit to a floating fish farm • Photo: Heidi Sarna