SeaDream started sailing again in June 202o.  Be sure to check the line’s website for up-to-date news.

SeaDream was created for lovers of luxury who shun formality and stiff upper lips and instead embrace a casual “no-jackets-required” elegance on route to the British Virgin Islands, Cuba, Italian Riviera, Adriatic Sea and other chic pockets of the world. SeaDream’s two mini cruisers feel like yachts in many ways, with their classic thick wooden doors, bar tops and furniture, and all the brass details and navy-blue fabrics. There’s lots of outdoor deck space for passengers to hang out on sipping endless glasses of Prosecco or other free-flow libations, all included in the fares. 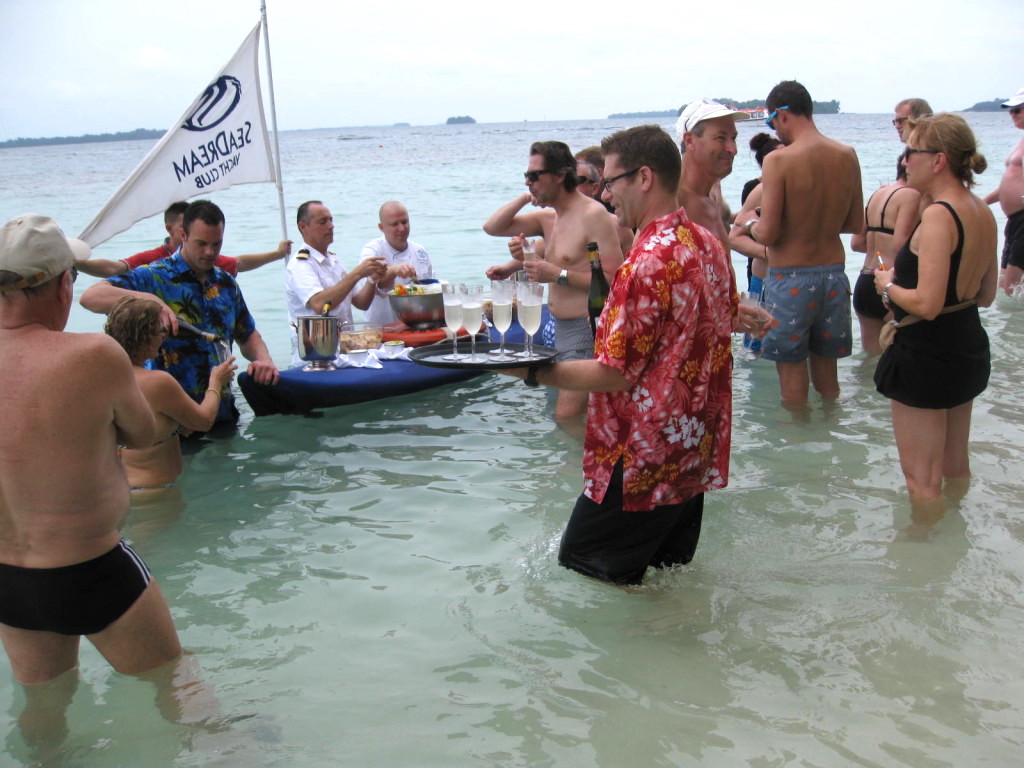 In port, the SeaDream MO is to stay late in places like St. Barts and St. Tropez so passengers can sample the local restaurant and bar scene. When possible, the ships anchor in places where passengers can zip through the surf on a WaveRunner, and in port, pedal around on a bicycle, both stowed on board. The line’s beloved champagne and caviar party on a remote beach is a cruise highlight and epitomizes SeaDream’s laid-back style of indulgence.

Before SeaDream was founded in 2001, its two ships had another life; they were originally built for Sea Goddess Cruises and named SEA GODDESS I and SEA GODDESS II. From their launch in the mid-80s, the pair was considered two of the poshest small-ships on the high seas. They changed hands a few times over the years, becoming a part of the Cunard and then Seabourn fleets, before joining SeaDream.

Note: In Spring 2019, the line announced the building of a brand-new yacht for 220 passengers occupying 110 veranda suites. Constructed in the Damen shipyard in the Netherlands. However, in early December 2019 the order for the new ship was cancelled, no reason given. All initial bookings will be refunded, and at the time, it was hoped a new ship order would be announced in 2020.

Mostly Americans and some Europeans and Canadians, majority 50+. Holidays and summers you’ll see extended family groups too, sometimes several generations; though these ships are not geared in any way to young kids under about age 12. A good slice of the line’s business comes from full-ship charters, often by large (rich) families. Occasionally there are big groups on board that take over half the ship; when booking ask if there are any on your sailing to avoid feeling like an outsider.

5; an elevator connects all but top deck.

Wine at lunch and dinner, spirits and all drinks throughout cruise, gratuities, use of water “toys” from the yacht’s marina and mountain bikes.

Note: June 4, 2019, the U.S. government announced new travel restrictions for Cuba that directly impact cruise travel to the Caribbean nation. After much consideration and extensive discussions with travel partners, SeaDream Yacht Club has decided to cancel its 2020 Cuba Collection. At this time, there are no future Cuba sailings on SeaDream itineraries. 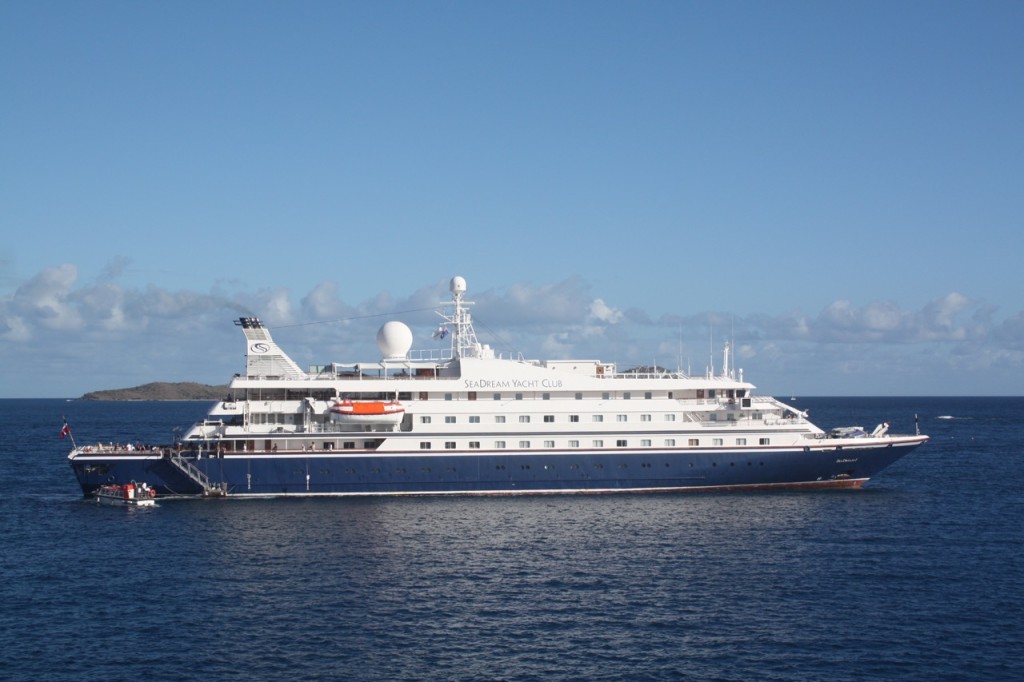 The mini SeaDream cruisers can slip into ports and waterways the biggies cannot. * Photo: Ben Lyons

The ships are casually chic and all-inclusive, and you can’t beat the size: large enough for two restaurants, a pool and a hot tub, and small enough to feel intimate enough to make friends easily. A crew of 95 means there’s almost one crewmember for every passenger; they may even lead walking tours or bike rides in port, called “shore-side casuals.” Service isn’t stuffy or cloying, but trust us, you’ll want for nothing.

The SeaDream twins cruise in different regions of the world at the best time to visit.

All the cabins feature lots of real wood furniture and cabinetry for a nautical feel, plus an efficient entertainment center with a flat screen TV, DVD/CD player and iPod docking station that also incorporates a vanity, desk and mini-bar, stocked with beer, soft drinks and water. A sofa can accommodate a third guest in all cabins, ideal for an older child.

There are 54 Yacht Club cabins measuring a comfortable 195 square feet, and 16 of them can be combined to create 8 double rooms called Commodore Suites (cabins on Deck 2 have portholes, those on Decks 3 and 4 have large picture windows). There are also two large suites. Beds are clad in Belgian linens are very comfortable, though on the narrow side, and storage space is generous. 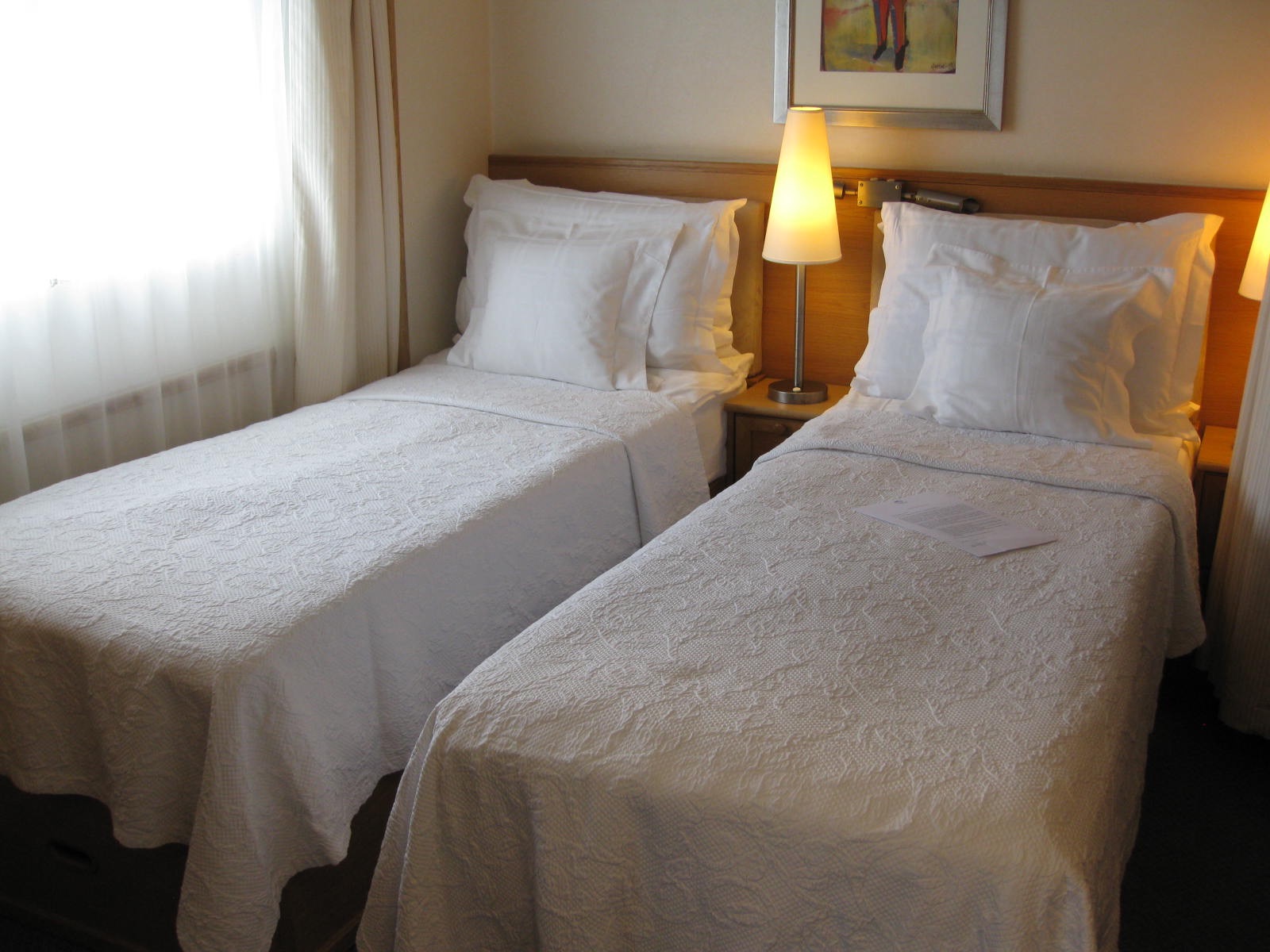 Marble covered bathrooms have showers and are small, but functional. The Bulgari toiletries are appreciated and so are the free cotton SeaDream-logo pajamas. Other extras include cotton robes, slippers, personal safe, individually controlled AC, make-up mirror, personal stationary and hair dryer. Cabins have dataports for Internet Access (for a fee), but on our last cruise, it was veryyyy slow. These ships are not recommended for passengers using wheelchairs, as doorways to cabins are not wide enough and elevators don’t reach all decks.

There are two restaurants — one indoor, one out — plus the roomy Main Salon lounge with a dance floor and small bar, that’s used for port talks, movies, and pre- and post-dinner dancing. It leads out to the stern-facing pool deck and bar. One level up on Deck 4 is the Piano Bar, often the scene of sing-alongs, and adjacent to it, a tiny casino and a small library.

Forward on Deck 4 is the surprisingly well-equipped ocean-view gym with half a dozen cardio machines and a spa with four treatment rooms and outdoor space. Up on Deck 6, is the Top of the Yacht Bar, where a thick wooden U-shaped bar holds pride of place under a sail-like roof with the rest of wonderfully open to the elements. It’s the place for drinks any time, and it’s especially fab at sunset. If the crowd is eager, the bartenders will crank up dance music after dinner and patrons can dance and let their hair down. 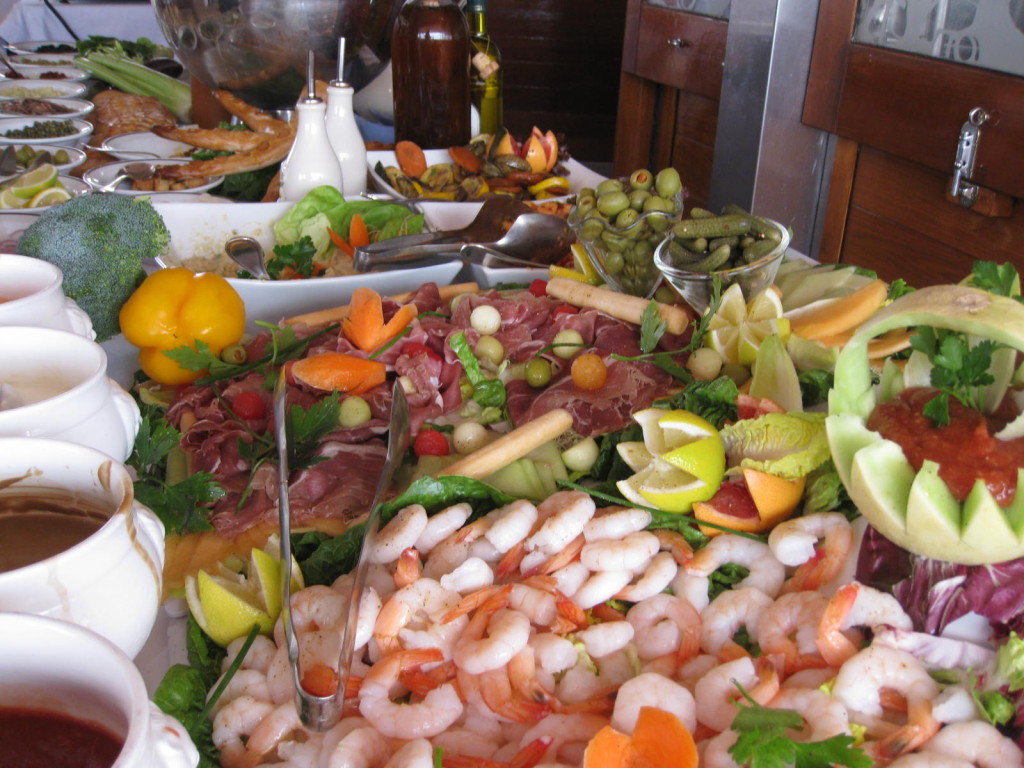 A typical delicious lunch buffet on board.  *  Photo: Heidi Sarna

Eating is a high point, especially when the weather allows dining in the open-air Topside Restaurant up on Deck 5; otherwise, it’s the more traditional Dining Salon inside down on Deck 2. The Topside’s cozy tables for two or three tucked into the wooden banquets along the edges are much sought after, while the wake-facing tables for four are wonderful if the wind isn’t too strong. Seating is open, with plenty of tables for two and four, but a few days into the cruise, most people are eager to dine with new friends at larger combined tables.

In Topsiders, breakfast and lunch are buffet style, with elaborate displays of homemade breads and pastries, as well as fruits. Similarly, at lunch, the buffet is generously laid out with a variety of salads, cold cuts and cheeses; at both meals there are ala carte items prepared in the galley, from eggs Benedict and crepes at breakfast, to grilled fish or a noodle dish at lunch.

For dinner in the Dining Salon, choose a de Degustation (tasting) menu or go with Japanese, raw food or pan-Asian dishes in addition to popular western standards. Mid afternoon snacks are served poolside and if you’re hankering for caviar, just ask for it if you don’t mind paying extra. There’s 24-hour room service for snacks and lite meals. 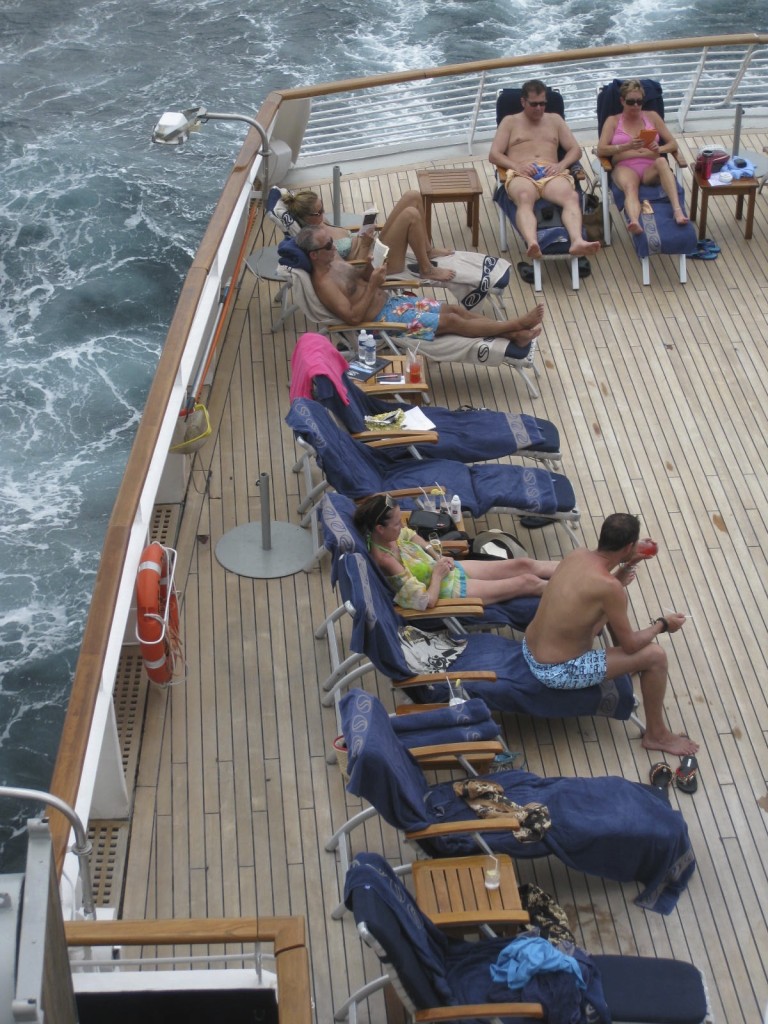 Life on a SeaDream cruise is lived up on deck.  *  Photo: Heidi Sarna

When the ships are on the move, passengers love sunbathing and snoozing on the firm Queen-sized sunbeds that line the top-most deck (though depending on the wind direction, soot from the funnels can make things a tad unpleasant). They also love sipping a refreshing glass or two (or more) of refreshing Sauvignon Blanc at the open-air bar or around the small pool on the protruding aft deck, with great views of the ship’s wake.

When anchored, weather and conditions permitting, a watersports platform at the stern allows you easy access to kayaks, sailboats, stand-up paddleboards, snorkel gear, personal water craft (Jet Skis), water skis and a floating island/trampoline. There are also mountain bikes for use in port (mostly in Europe and the Caribbean) and each ship has a golf simulator and wii gaming consoles for use in the Main Salon.

On all cruises in the Caribbean, and in the past in Asia too, the high point of the week’s activities is SeaDream’s indulgent “Caviar and Champagne Splash” held on a remote stretch of beach somewhere. Passengers happily wade through the surf to grab plastic glasses of champagne and dollops of caviar from waiters standing chest high in the ocean and serving the goodies from floating life rings and surfboards.

It’s all giggles and guzzles, as passenger revel in the frivolous (and fun) absurdity of it all. The beach bubbles are followed by a full lunch at tables set up in the sand. Evenings on board, entertainment consists of drinks with new friends, sing-alongs at the piano bar, gambling in the tiny casino, dancing on deck at the Top of the Yacht Bar, and a weekly outdoor movie shown under the stars.

During the day, occasionally there are talks or special films shown about the destination, but generally SeaDream does not host expert lecturers. There are however, a handful of wine appreciation theme cruises every year, with tastings and a winemaker’s dinner hosted by a guest winemaker or winery owner.

Windstar may be the closest, especially its sailing ships but with less pampering and less expensive fares. 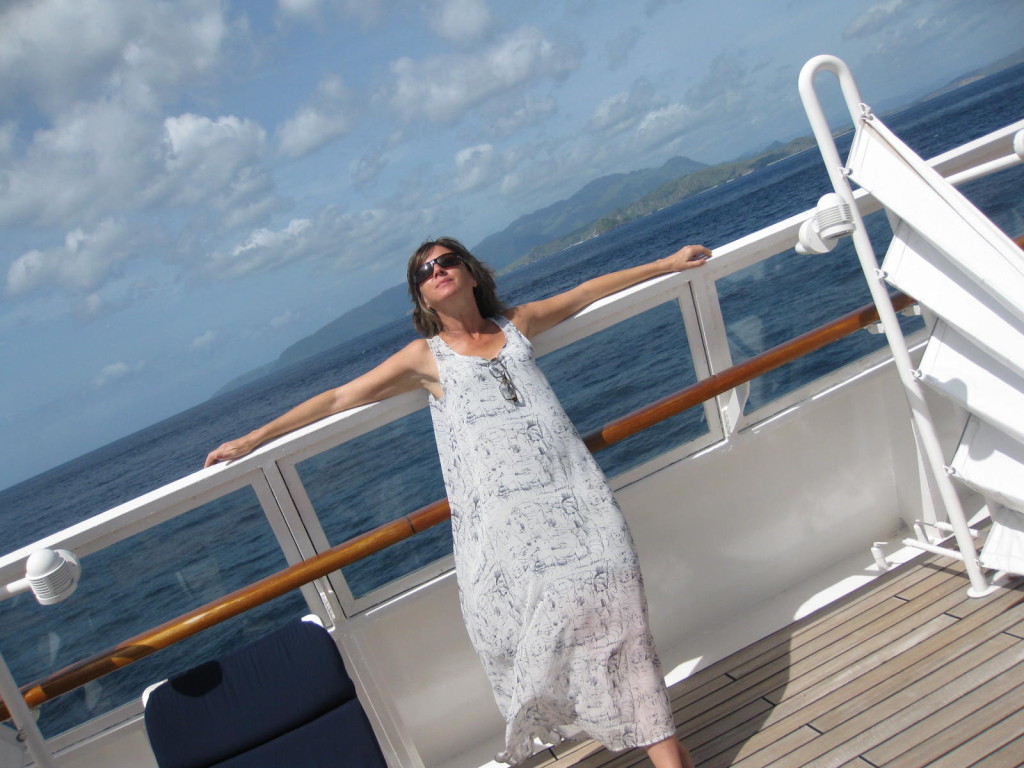 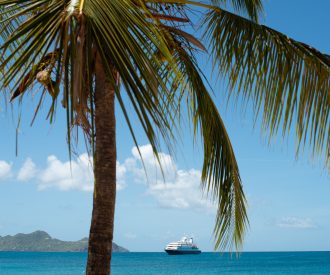 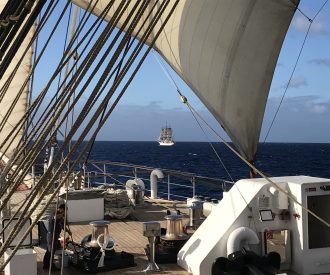