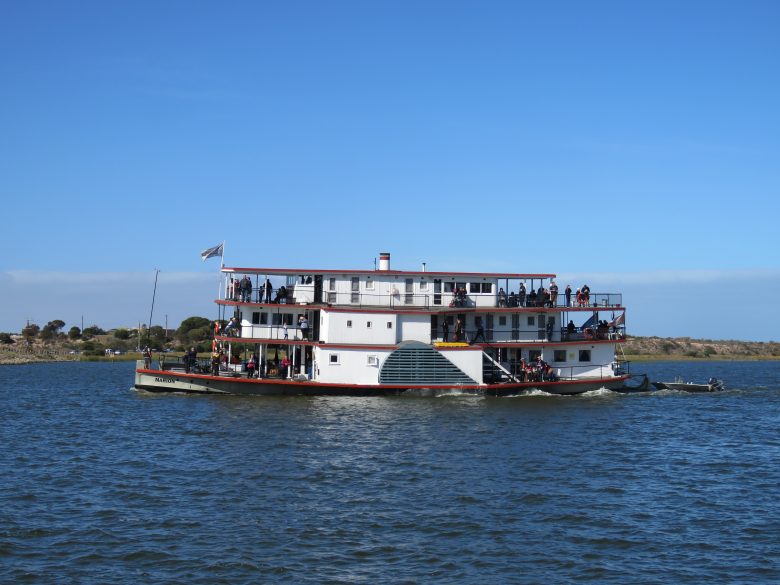 Steamboats have plied Australia’s Murray River since the mid-19th century. Today steamers range from wood-fired antiques, the topic of this report below, to modern replica sternwheelers. A handful make overnight cruises lasting from just two days and up to a week. 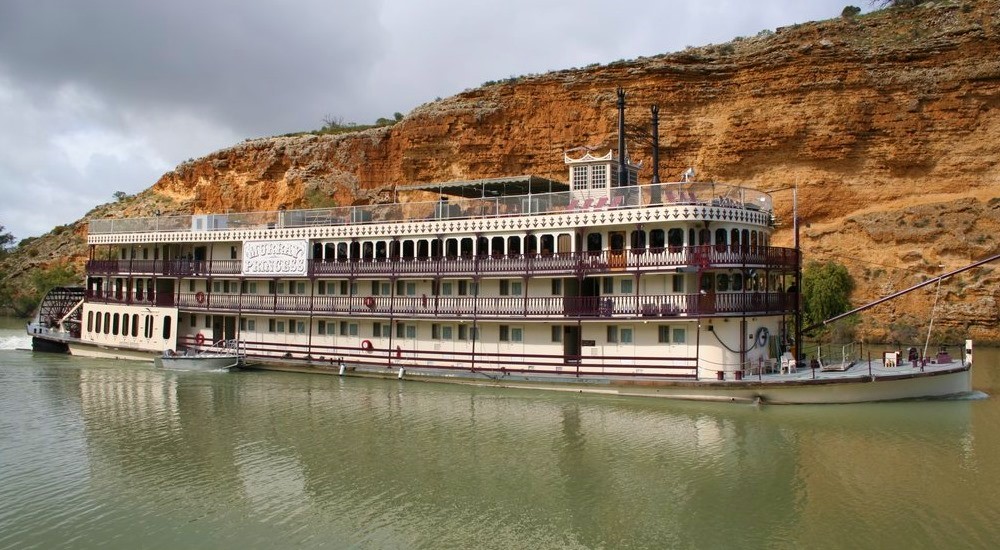 At landings along the way in the states of South Australia and Victoria, additional paddlers make day trips. In total, the Murray River basin boasts the world’s largest fleet of paddle steamers. Both the author of the featured cruise, William Worden, and I have additionally explored more of this fascinating navigable river — Australia’s longest by far — by car.

The cruise report, “Two Nights in the Museum,” provides the introduction to the subject, and here’s a link to additional Murray River trip options.

The birds and animals, some peculiar to Australia and the Murray River, make for happy hunting.

Two Nights in the Museum

Australia’s Murray River offers several opportunities for cruises, but one is unique: the chance to cruise aboard a museum. The paddle steamer Marion, launched in 1897 as a barge, was converted into a steamer in 1900. She was altered several times and achieved her present form by the mid-1930s, with three decks of accommodations for a maximum of 25 overnight passengers.

She cruised until 1952 when Murray Shipping, Ltd. liquidated and she became a houseboat. The National Trust of Australia bought her in 1963 and she steamed “one last trip” to Mannum, where she served as a static museum for several decades.

In 1989 it was decided that the best way to preserve the Marion was to restore her to operation. After much volunteer labor, Marion returned to steam in 1994. 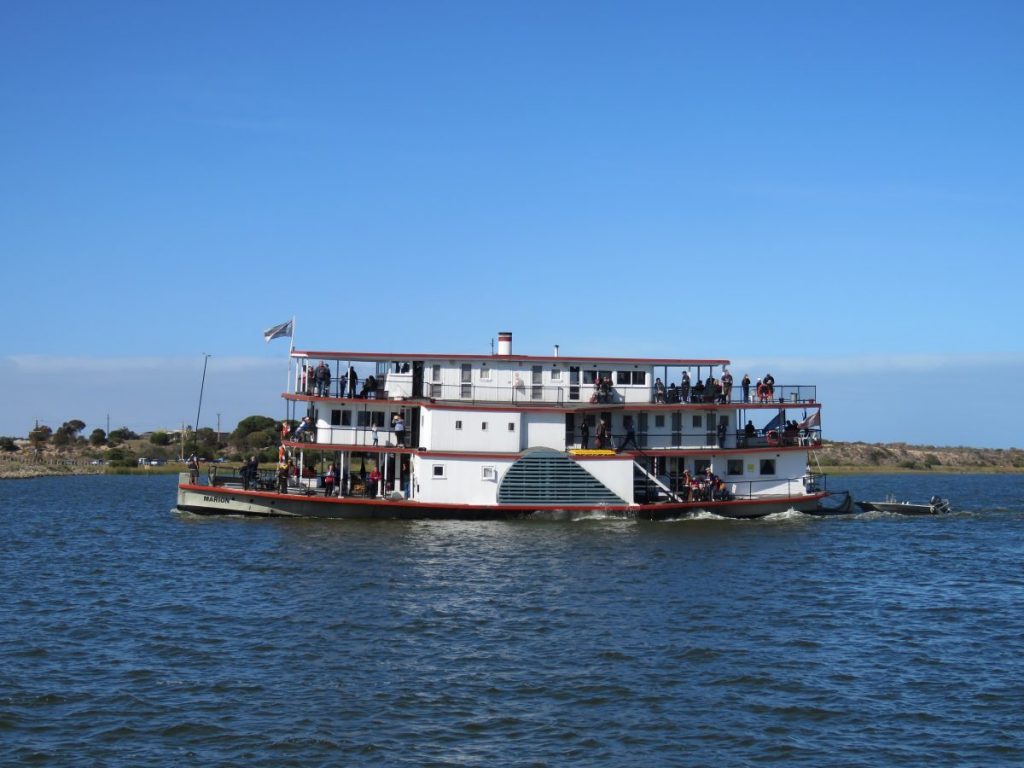 A Murray River Steamboat Cruise Based in Mannum

She remains based at Mannum, South Australia and runs day excursions as well as a few multi-night cruises every year.

Marion is a museum piece, preserved as she was in her heyday; luxury is not on tap. Her appeal is not in slick décor, but in the more fundamental pleasure of shipwright carpentry, the kind of appeal most of us find in simple, well-made, solid constructions of wood.

Cabins are typical of the time, about seven feet square with an upper and lower bunk, a small cabinet and shelf, a straight chair and hooks for hanging clothes. Suitcases fit under the bunks, and we packed light for our two-night trip.

Toilets and showers are down the open deck, positioned over the paddle boxes. There is a second deck forward lounge (with bar), and the former smoking saloon on the third deck aft (smoking is not permitted on this all-wood museum piece). The dining saloon is aft on the main deck. Pilot house and engine spaces are open to all to observe and inquire.

Typical of the Murray River boats, Marion’s engine is a Marshall “portable” engine and boiler from England. Originally set on wheels, it had its undercarriage removed and then was placed in the hull. Because the engine runs too fast for paddlewheels, there is a big gear and pinion reduction.

Marion is wood-fired and the wood bunker and the fire hold are open for passenger observation. Pilot house equipment is limited to a big steering wheel (Armstrong power steering), a throttle, and a speaking tube to communicate with the engineer down below. 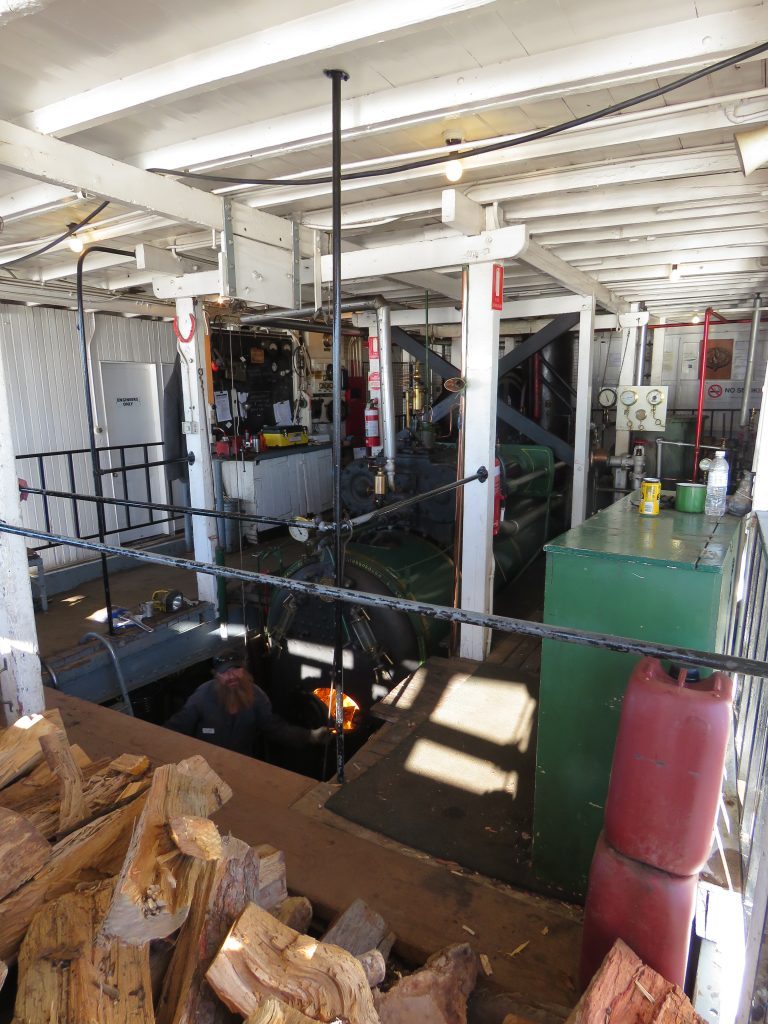 The crew of the Marion is 100% volunteer. Without exception, they live up to the Australian reputation for informality and friendliness. Their love for their boat is worn on their sleeves. They go out of their way to make a cruise on her pleasant because her cruises raise money that helps to preserve her. Further, one and all, shy and gregarious, they seem to genuinely like their passengers.

Breakfast, lunch and dinner are served in the dining saloon, while a modest baked sweet is laid out for morning and afternoon tea in the lounge. Home cooking is the standard. If the word “gourmet” would not come to mind, “substantial,” “excellently-prepared” and “delicious” certainly would.

The bar in the lounge is stocked with a range of soft drinks, beers, ales, and ciders, as well as stronger alcoholic beverages. 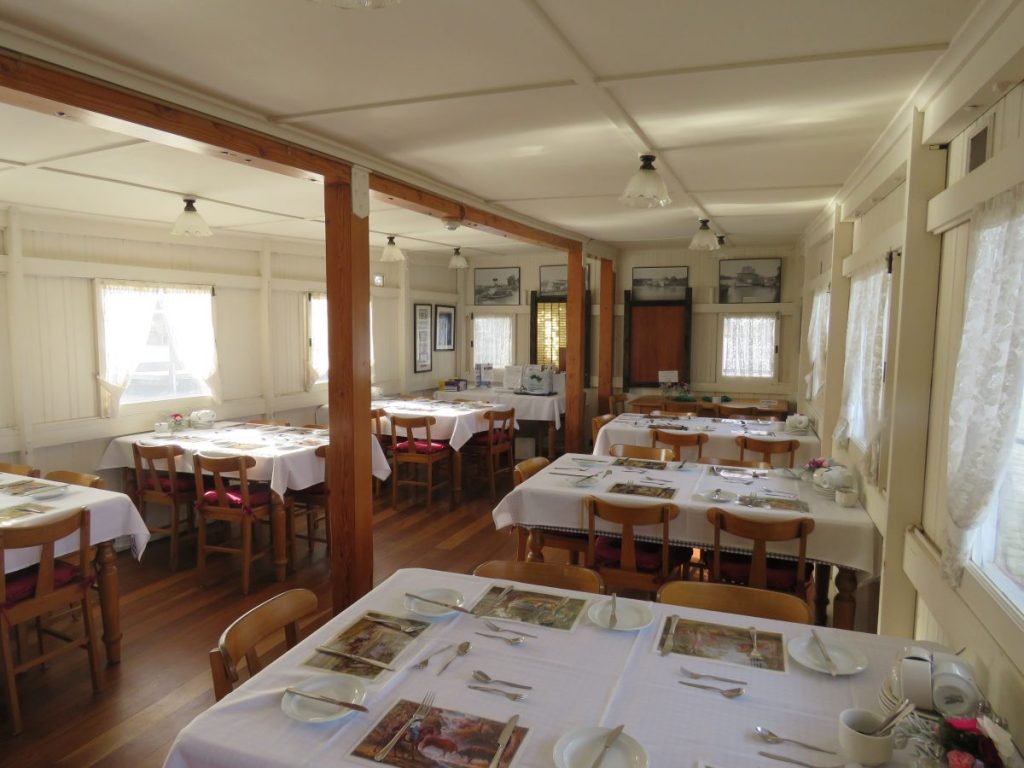 Entertainment is largely self-provided. A couple of very interesting videos about Murray River steamers were played in the lounge. One evening, the purser led games: a form of darts with Velcro instead of sharp points and, believe it or not, blindfolded pin-the-tail-on-the-donkey. This seemed lame at the outset, but ended up in tears-down-the-cheeks laughter. 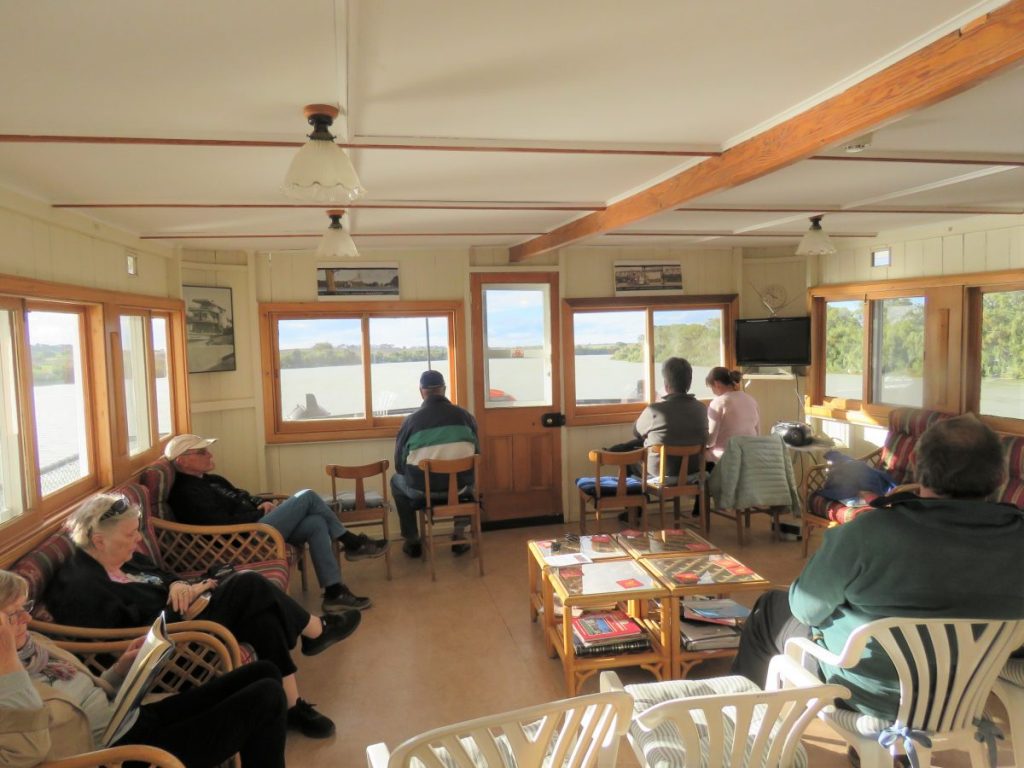 Views to all sides from the lounge. * Photo: William Worden

Scenery varies according to the Marion’s route for a specific cruise. Ours, from Goolwa, where the Murray spills into the Southern Ocean, to Mannum, began in some narrower channels leading to the crossing of Lake Alexandrina, a part of a large protected wetland.

Bird life is abundant on the crossing, both familiar types like pelicans and species unique to Australia. At Wellington, the steamer reached the river proper. We spent the night at Murray Bridge; some found a pub. We did a little shopping. 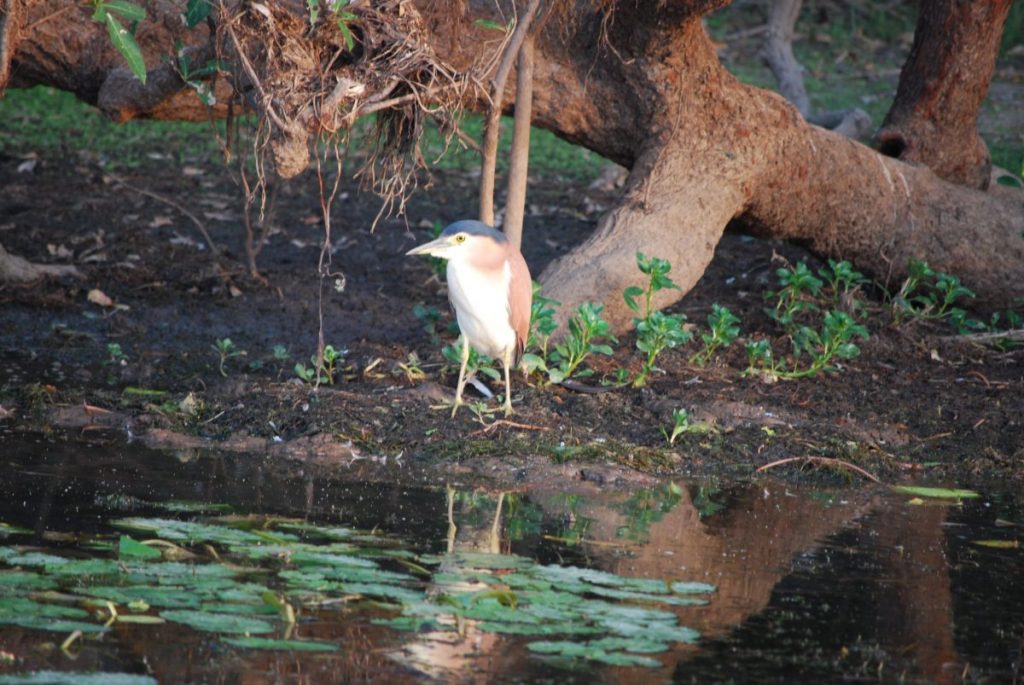 The morning found us upbound again in a narrower stretch of the river where limestone cliffs had been carved by millennia of flowing water. We arrived at Mannum, Marion’s home, not long after noon. After saying our regretful good-byes to Marion, her crew, and our new-found Australian friends, we visited the river museum and then headed off by car up the Murray. There we would experience short day trips on some of the other preserved steamers that proudly sail on Australia’s longest river. 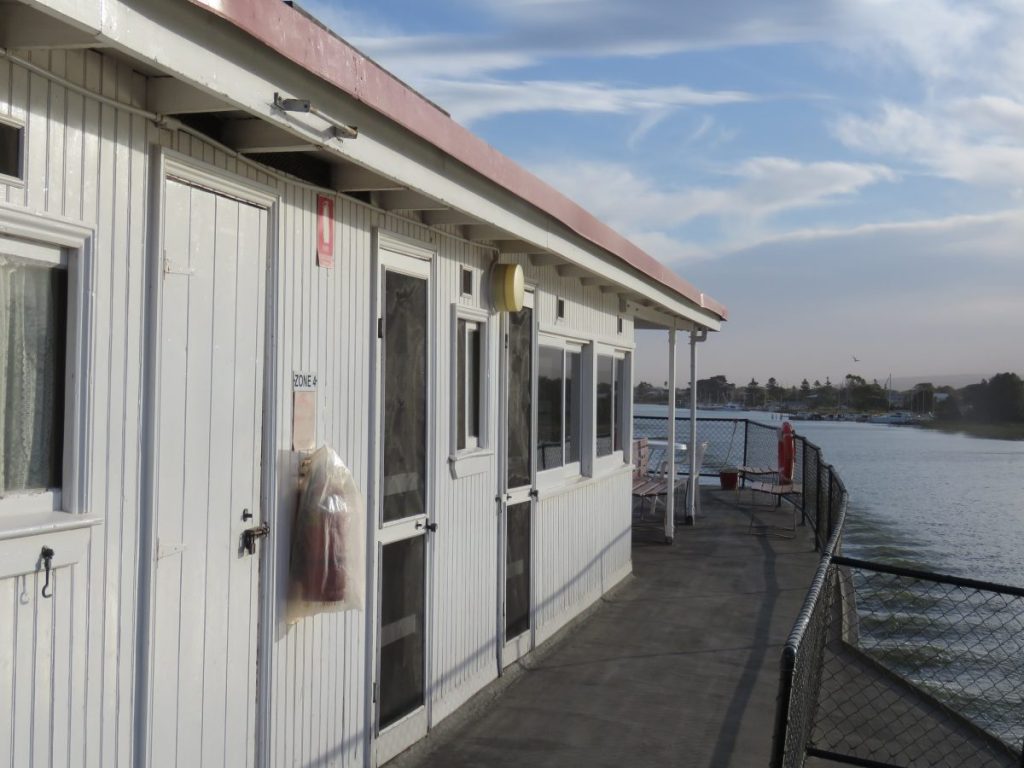 Cabins open to a side deck. * Photo: William Worden

The Marion’s cruise itineraries vary in direction and length depending on the river events she visits. Ours was one of a pair of two-night sailings to and from the South Australian Wooden Boat Festival at Goolwa, a trip she seems to make every year in late April.

In the fall (Australian spring!) of 2019, she will make a similar pair of two-night trips upbound from Mannum to Morgan, a trip which, the crew assured me, is more scenic. In other years, she has offered cruises as long as eight nights when visiting very distant events. 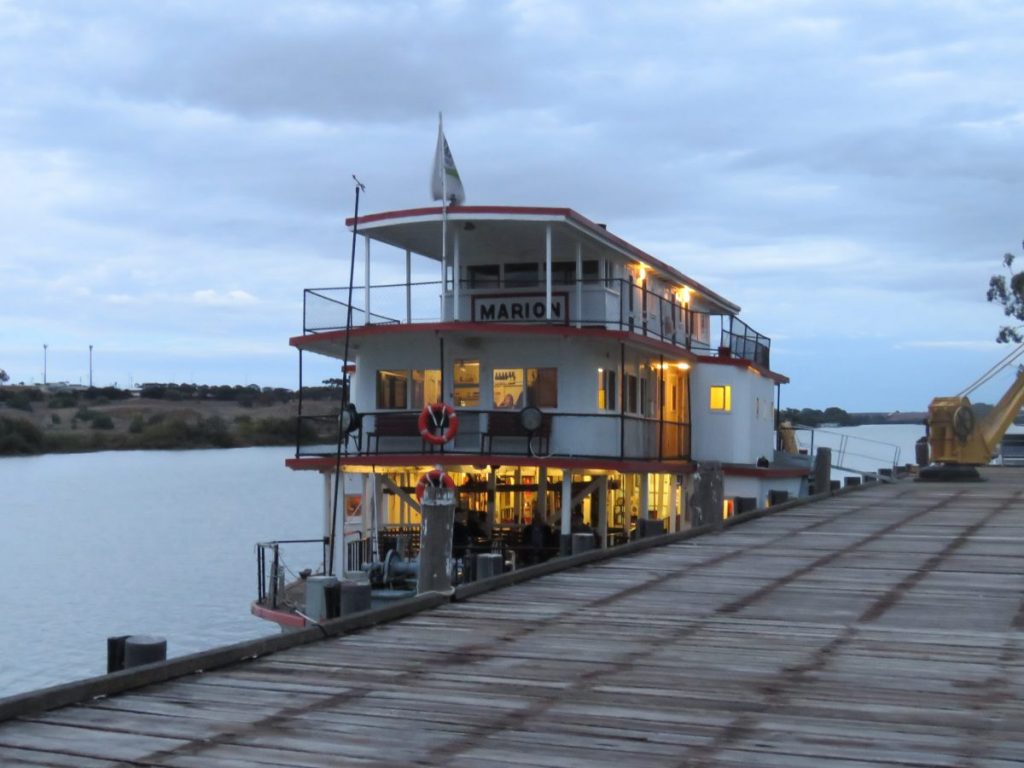 The years’ schedule is posted early each year on the website: http://www.psmarion.com/. 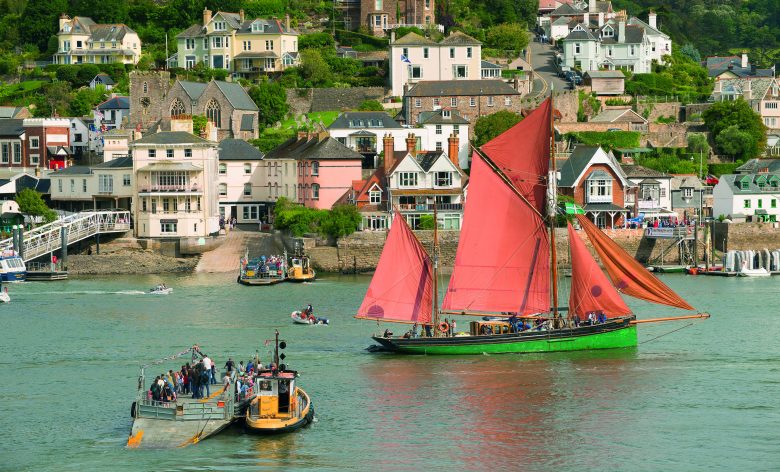 N.B. Part of Brixham’s heritage fleet is to be sold after The Trinity Sailing Foundation, a charity which has taken thousands of disadvantaged people to sea for 20 years, announced it has to cease current operations and redefine its mission. The Brixham-based charity’s three historic vessels — Leader (1892), Provident (1924), and Golden Vanity (1908) — will be sold after the charity said that changing conditions in recent years mean its previous operating model is no longer viable. If any further details about the future of the three historic ships become available, the news will appear here. Sad news indeed.

Trinity Sailing operates a fleet of three historic gaff-rigged sailing ships based primarily in Brixham, still an important South Devon fishing port, and also a tourist attraction thanks to the lovely setting. The fleet also cruises from other ports along the south coast of England, and up in Scotland for exploring the Western Isles. 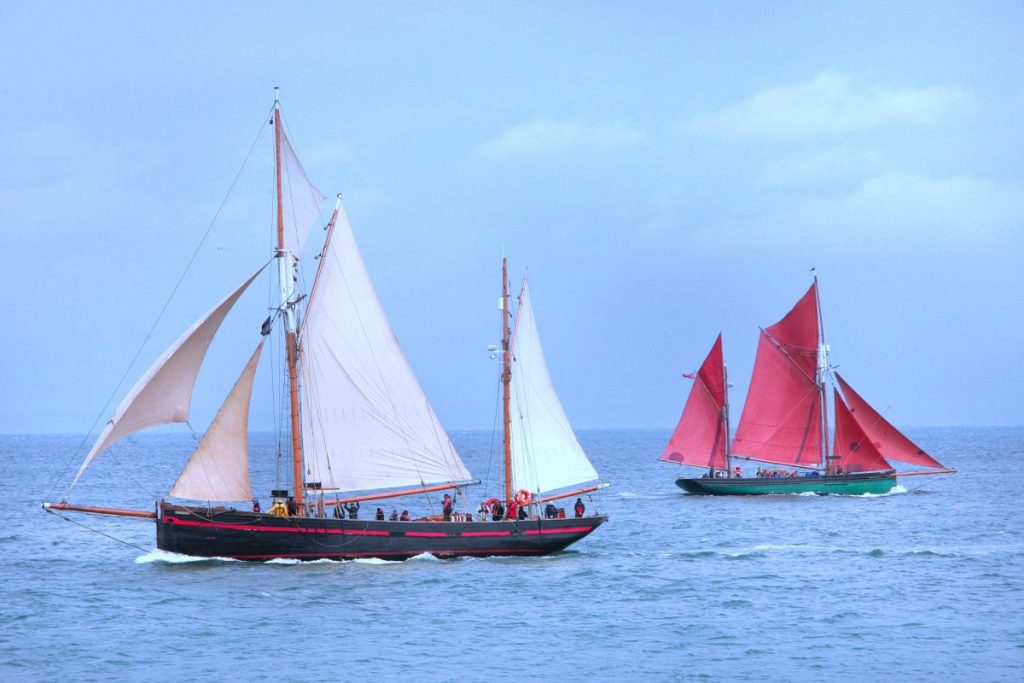 In addition, the firm operates a foundation, a registered charity founded in 1999, taking 600 children annually from all backgrounds, including the disadvantaged, on sail training cruises where they learn teamwork, develop skills that they did not know they had, gain confidence in themselves and make new friends. The website provides more information and videos illustrating this important program.

Sail the scenic coastal waters around Britain aboard wooden sail-powered former Brixham fishing trawlers that take 7 to 12 passengers. Built on the River Dart in South Devon between 1892 and 1924, the cruises begin at one or two nights and then on up to a week or more. In the late 19th century, these fast sailing vessels once formed the backbone of Britain’s most important fishing fleet. 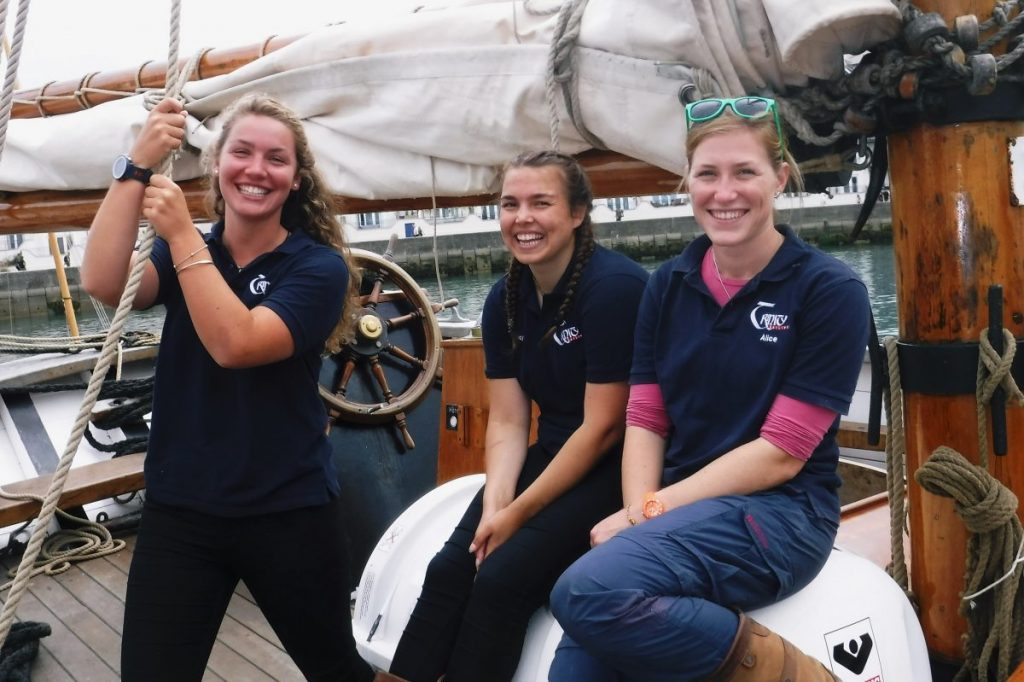 Just two and no elevators (after all, these are historic sailing ships).

British, other Europeans, Australians, Americans, and Canadian of all ages.

Operating season is end of March to late September.

Vessels are available for charter. 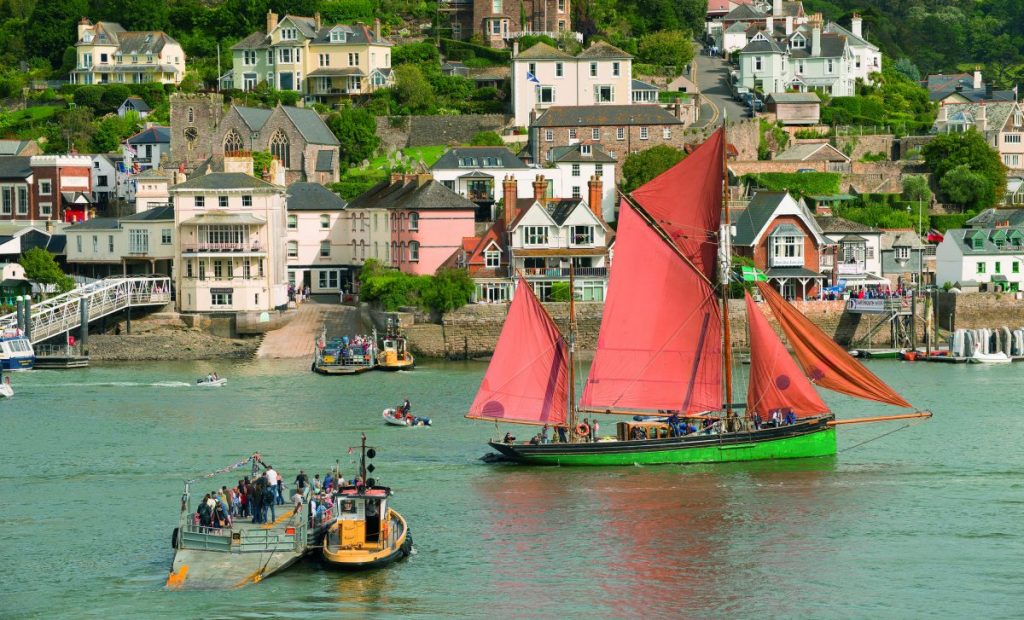 Cruise in an historic wooden sailing vessel (a Brixham trawler) that once numbered in the thousands, and now just a few remain as heritage vessels. Share the experience with up to 12 like-minded adventurers who come for the sailing experience, coastal and island scenery, specific destinations to explore, and camaraderie. Anchor at night in a sheltered location, sail for part of the day and then go ashore. The skipper will lay out the day every morning at breakfast. 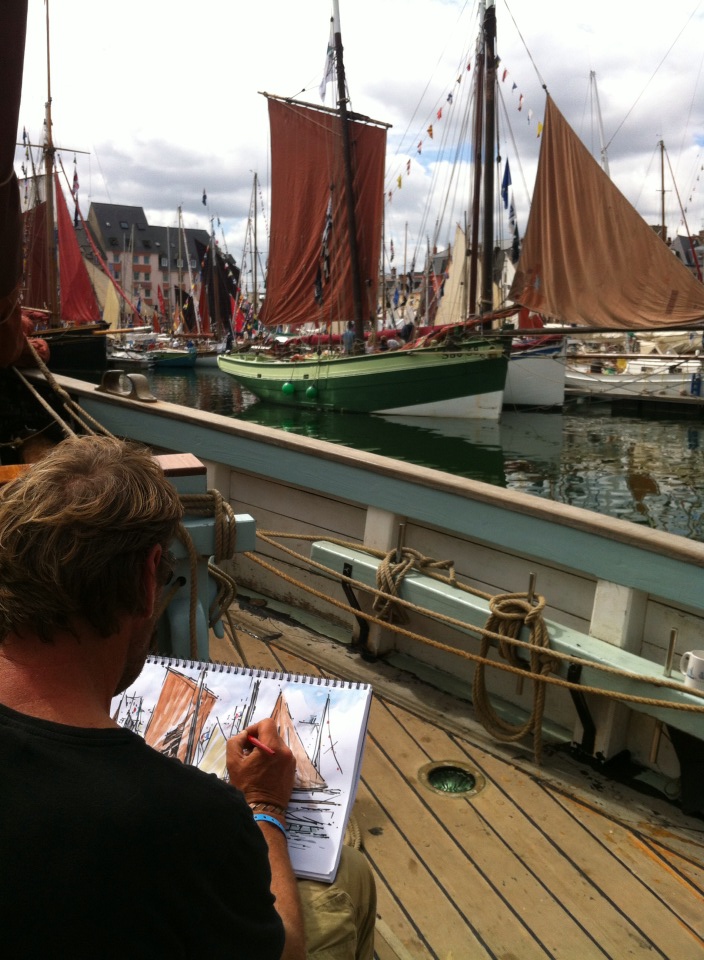 Skipper Toni Knights may host art sessions during the cruise.

The season begins at the end of March and continues into late September.

PROVIDENT has three double cabins with upper and lower berths, and a cabin for four in the fore peak. LEADER offers open dormitory-style accommodation for 12 passengers (with privacy curtains), and same for GOLD VANITY, which sleeps seven. All three offer shared toilets and hot showers.

A saloon serves as the lounge and dining room, with additional space to hang out on the open decks.

Food is sourced locally at the embarkation ports and en route the emphasis is on fresh seafood and Britain’s bounty. A typical lunch would be a cold meat platter, with cheeses, salad and freshly baked bread, while for dinner, expect something the likes of freshly-caught Brixham fish, such as Hake or Lemon Sole, served with potatoes and vegetables followed by a crème brulle. (Reports indicate glowing satisfaction!) A bar on board stocks wine, beer and cider for purchase; soft drinks are included in the fares. 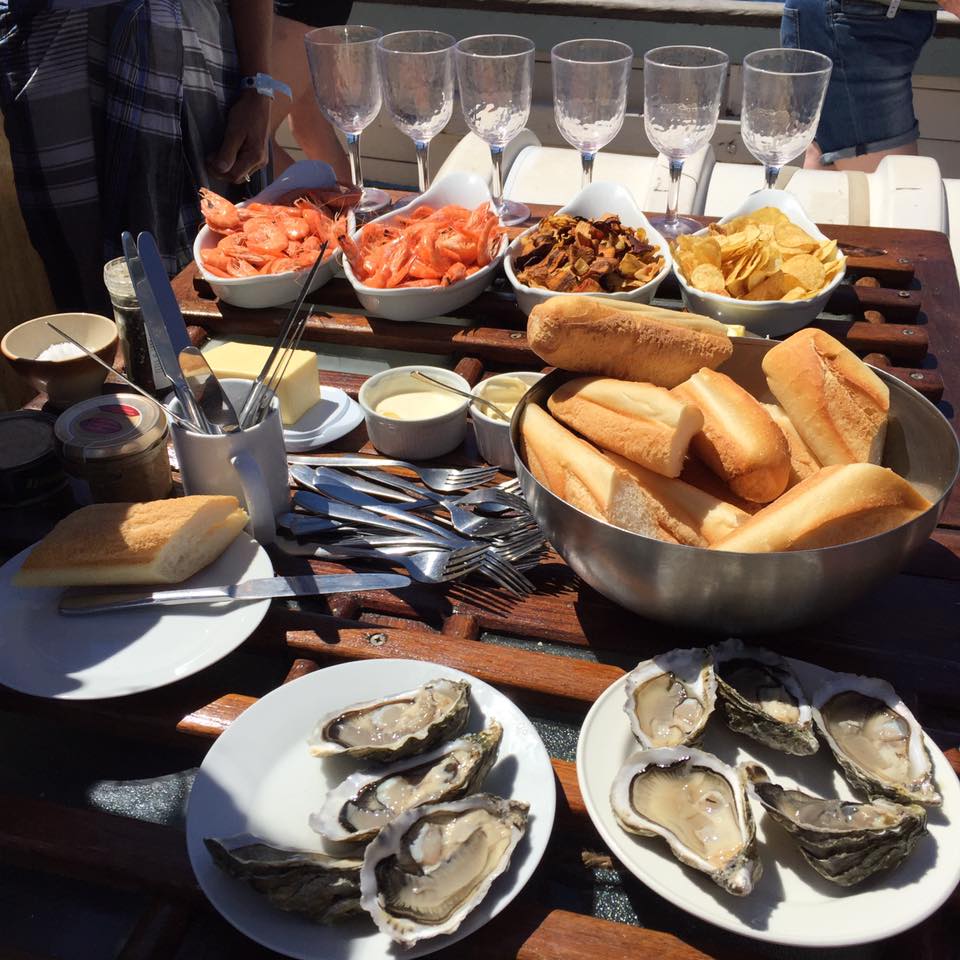 Participate in sailing during the passage to the next destination; go ashore on walks and hikes and general explorations along the shoreline, to beaches and into villages. Perhaps enjoy an evening BBQ ashore and a few hours of sailing after dark. Scheduled theme cruises: art, music, birdwatching, wildlife, family.

Consider a charter of a vessel and establish your own special interests.

The British Isles and coastal France have fickle weather and often cool temperatures when at sea so come prepared for all types of conditions that may also involve changes in the itinerary when the weather dictates. The website also introduces the foundations work and the once huge importance of the Brixham fishing trawler to the country’s economy. 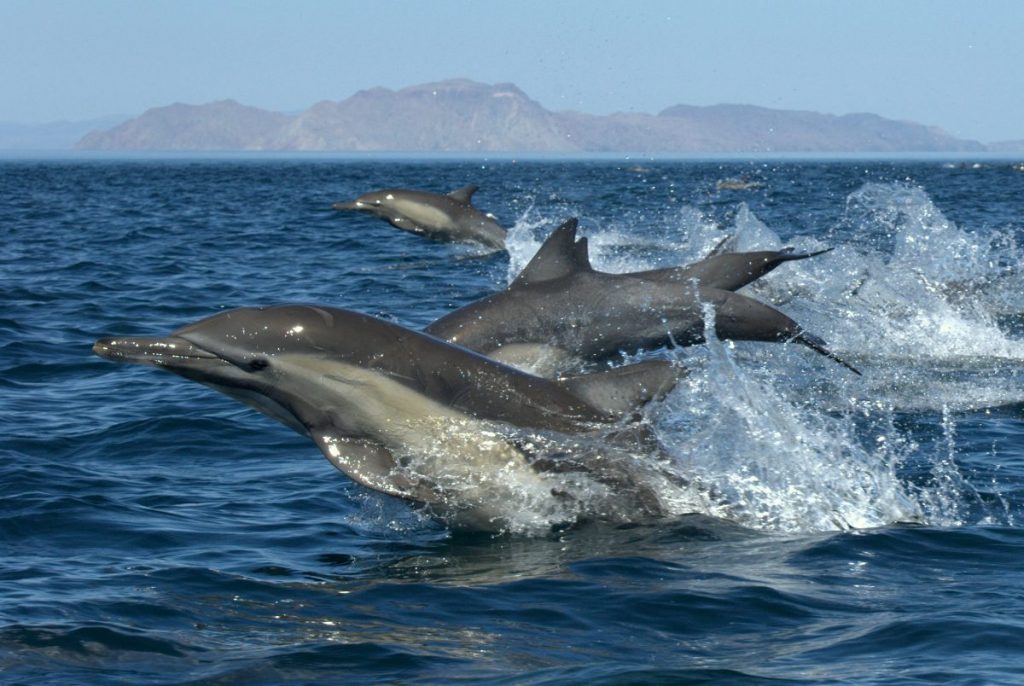 This is a unique sailing experience in Britain’s coastal waters from the Channel Islands in the south to Scotland up north.

🚃 🚃 AND be sure to read Ted’s related article, “A Chance Meeting on a Scottish Train” HERE, about how Ted first discovered Trinity Sailing!   🚃 🚃