Running on Waves will resume scheduled cruises in May 2021.  Be sure to check the line’s website for up-to-date news.

One of the world’s largest sailing yachts, the 42-passenger Running on Waves is a tall ship built with classic proportions and modern technology. It was built by the Polish superyacht yard Segel Masten Yachten and launched in 2011.

This luxury mega-yacht is a three-mast sailing vessel with barquentine-type rigging — the foremast is square-rigged while the remainder are fore-and-aft, the triangular-shaped sails that are more typical of a yacht.

It’s this barquentine feature that gives it a distinctive silhouette while allowing for frequent course changes.

At almost 70 meters in length, she is slightly larger than a tea clipper, and boasts quite a bit of open deck space — 15 meters per passenger, which is a true luxury of space. The ship’s shallow draft lets her call at small marinas, visiting more remote and less touristy destinations.

Running on Waves sails scheduled cruises in the Eastern Mediterranean and Adriatic Seas, and other times is available for private charter.

Charters make up about 50% of overall business (especially prevalent in peak season months of July and August), and commonly revolve around a private event, like a birthday, wedding, anniversary, family reunion or bachelor party. Running on Waves is also used for corporate groups, as an incentive award for top management, and for affinity groups and clubs, for instance for divers or golfers. 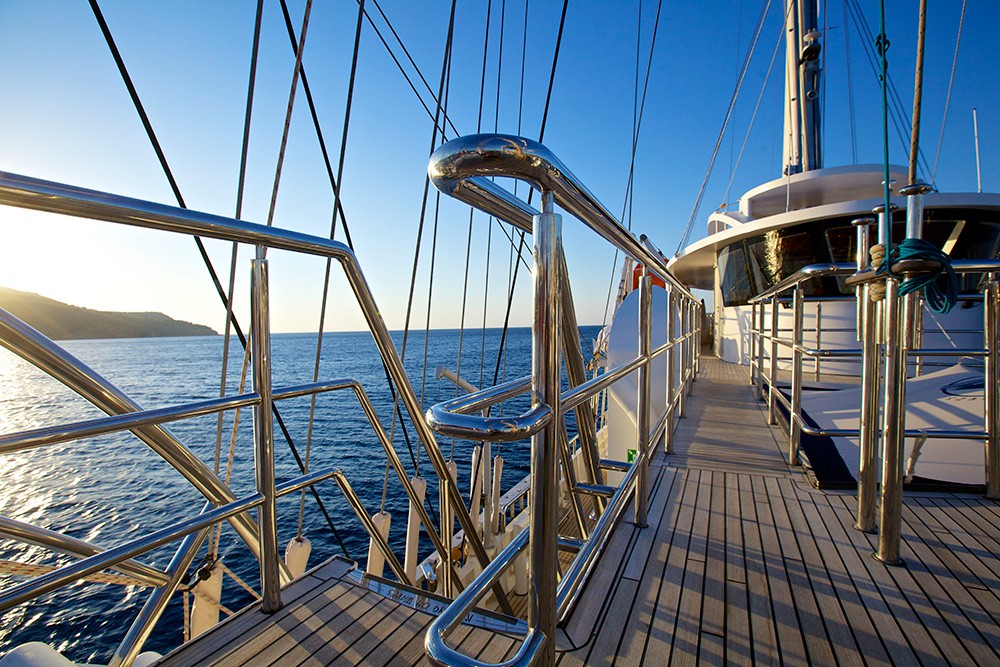 The view from up top is wonderful. * Photo: Running on Waves 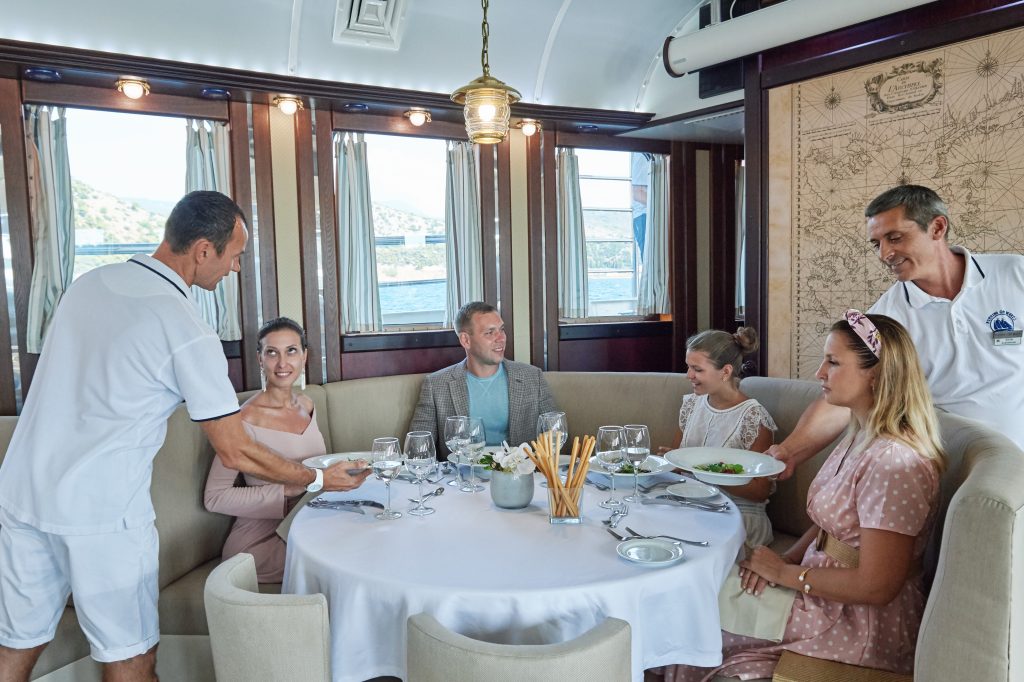 Scheduled cruises typically run for 7 nights, with itineraries that focus on Aegean destinations like Greek coastal villages and islands, the Balkan Peninsula, and ports in the Adriatic Sea.

Many stops (ok, not Santorini!) are far from the madding crowds as the ship can maneuver in smaller ports.

The Golf & Sail Greece cruise runs a couple of times each autumn. This 7-night journey begins at Athens’ port of Pireaus, sailing first for Nafplion, then Monemvasia and Pylos (for two days at Greek golf club Costa Navarino), then Kythera  and finally Agios Nikolaos on Crete. The ship also offers this same voyage in return.

Here’s a look at the golf cruises in a promotional video from the company, below:

Go for the sheer joy of sailing aboard a tall ship, powered mostly by the wind. The crew offer tours and some hands-on activities that can make getting there even more fascinating than the destinations themselves. 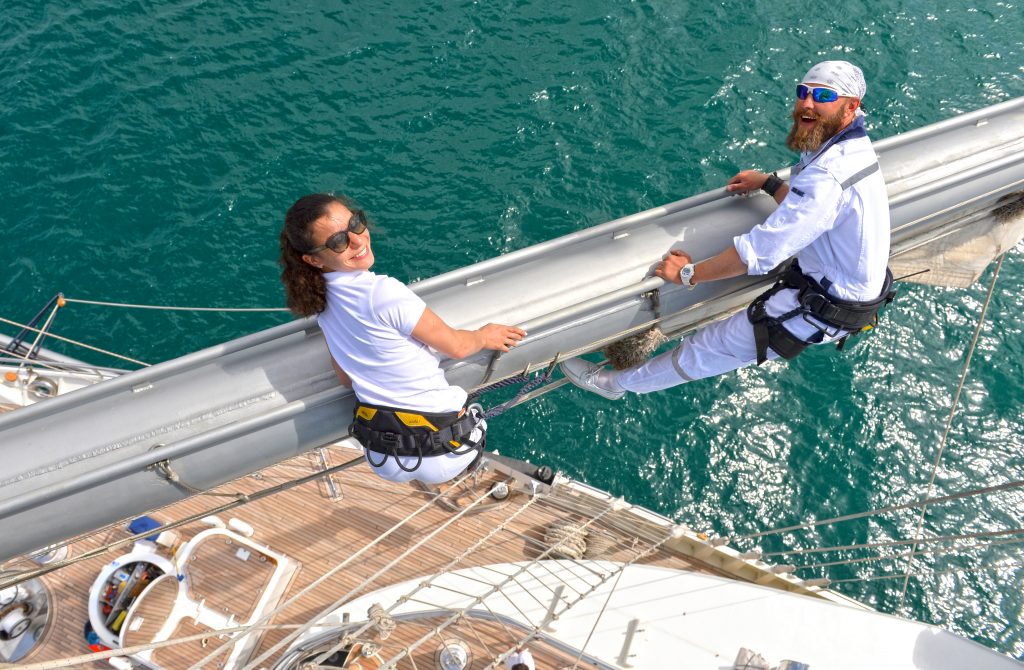 Try mask climbing with the crew. * Photo: Running on Waves

Scheduled cruises maximize the best weather in the region, from May until October.

As the ship is mainly powered by wind, typically about 70% of the time, there’s a sustainability element inherent in every trip. The line says, fuel consumption is 10 times lower than that of comparable-sized ships.

When anchored, passengers are shuttled to and from shore on tenders. * Photo: R.O.W.

From the ship’s stern marine platform, passengers can swim, snorkel, windsurf and kayak. Other watersports on offer include wakeboarding, water skiing, deep-sea fishing, and rides on mini-bananas or underwater scooters.

Watersports like kayaking are offered off the stern marina in some anchorages. * Photo: Running on Waves

On board there’s a menu of maritime-themed activities such as bridge and engine tours, plus things like knots tying, mast climbing, sail setting and celestial navigation. 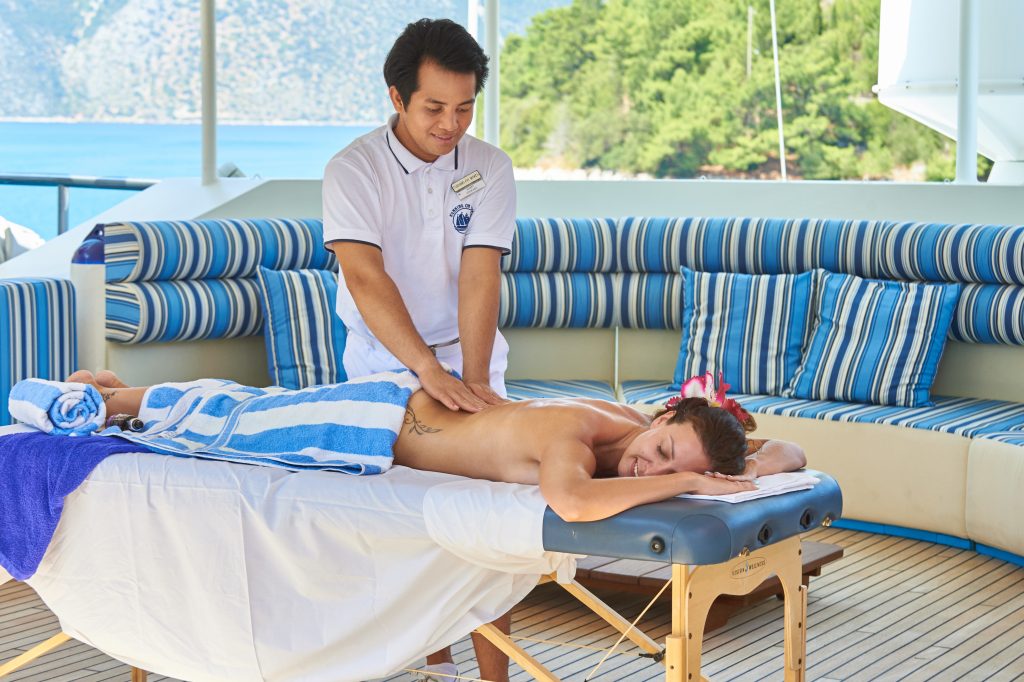 In the evenings there’s karaoke, dancing, movies and sometimes local folk entertainers are brought on board for a performance.

The tall ship has three decks (with staircase access only) accommodating 42 passengers with lots of open deck space and public and private rooms decorated with natural elements such as hardwoods and touches of nautical décor. 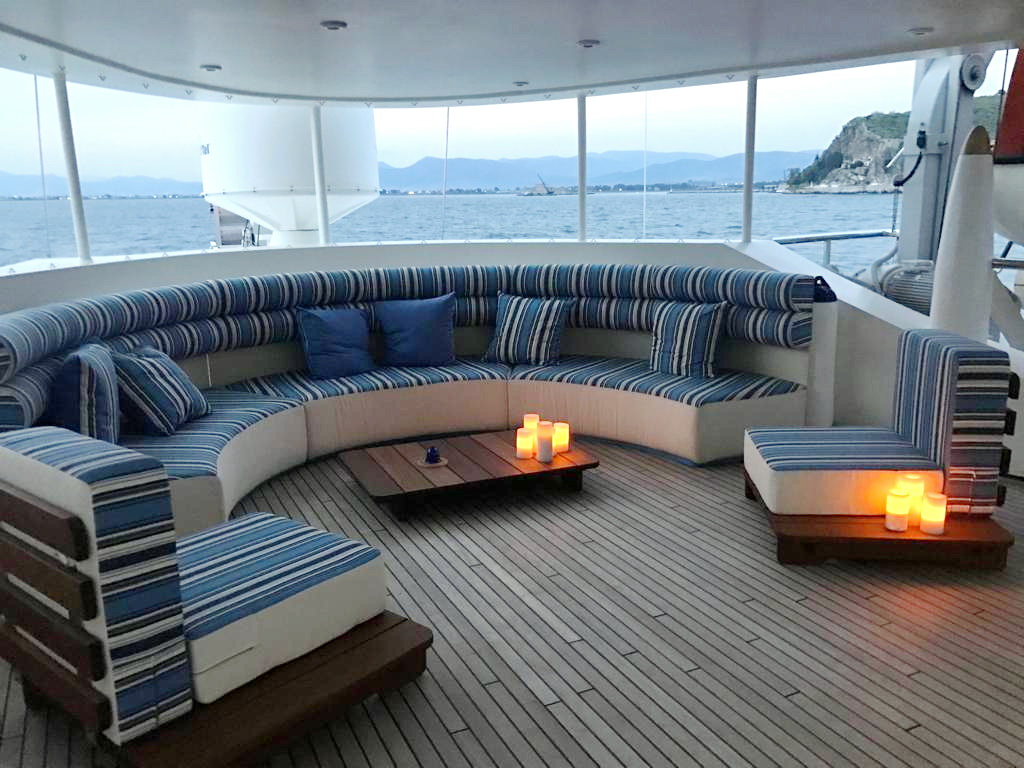 The main restaurant seats all passengers at one sitting, however, meals can also be taken in a dinning area on the open deck.

Four meals a day include breakfast, lunch, afternoon tea and dinner, prepared in Mediterranean style with Greek influences. Chefs focus on fresh seasonal produce and seafood — from shrimps and prawns, to mussels, octopus, calamari, and an array of fresh fish — with plenty of local delicacies, accompanied by wine. Special dietary requirements can be accommodated with advanced notice.

There are four lounge and bar areas, including the terrace lounge, which is open in the mornings for yoga.

The interior bar inside the restaurant. * Photo: R.O.W.

Another outdoor lounge is the go-to spot for cigar and nargile (Turkish pipe) appreciation.

There’s also an observation deck with terrific views located just above the bowsprit. 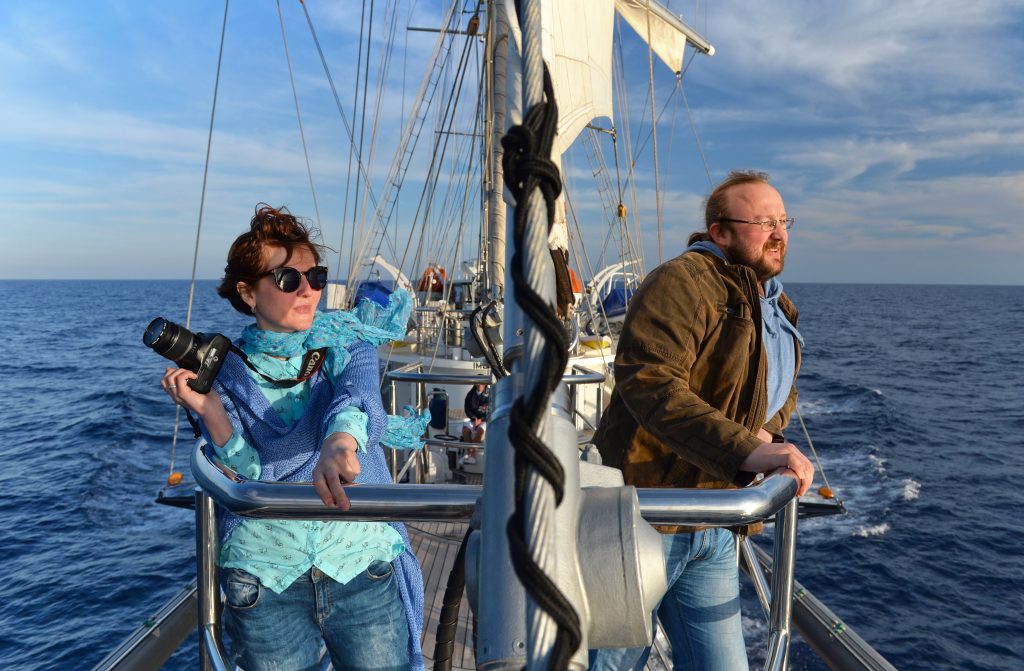 The observation deck for sweeping views. * Photo: Running on Waves

The sun deck has plenty of lounge chairs and shaded areas, plus a hot tub. 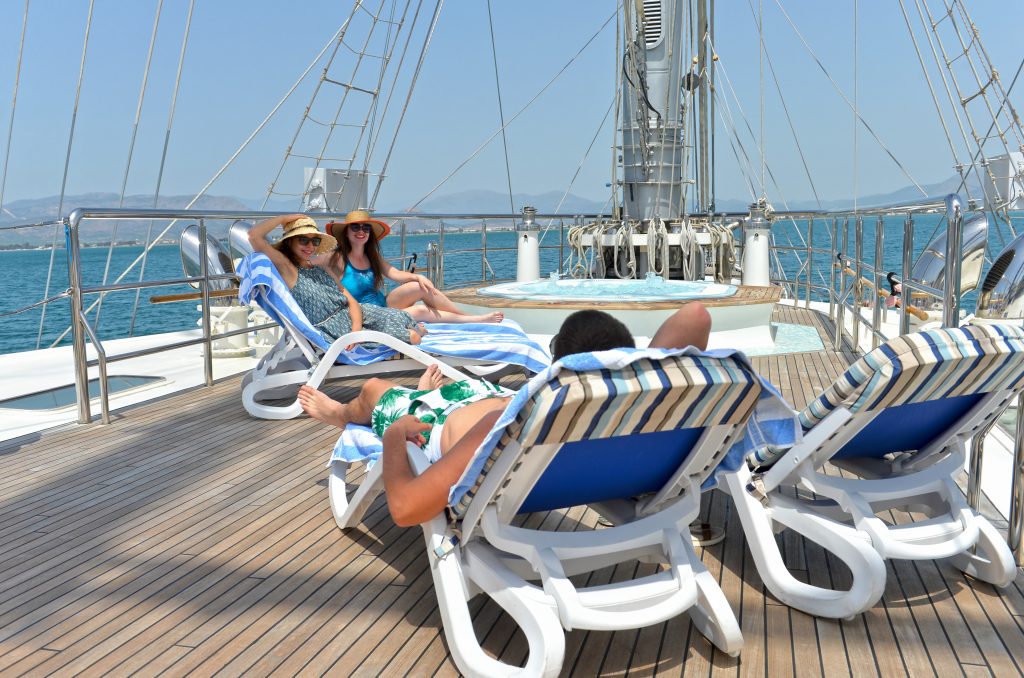 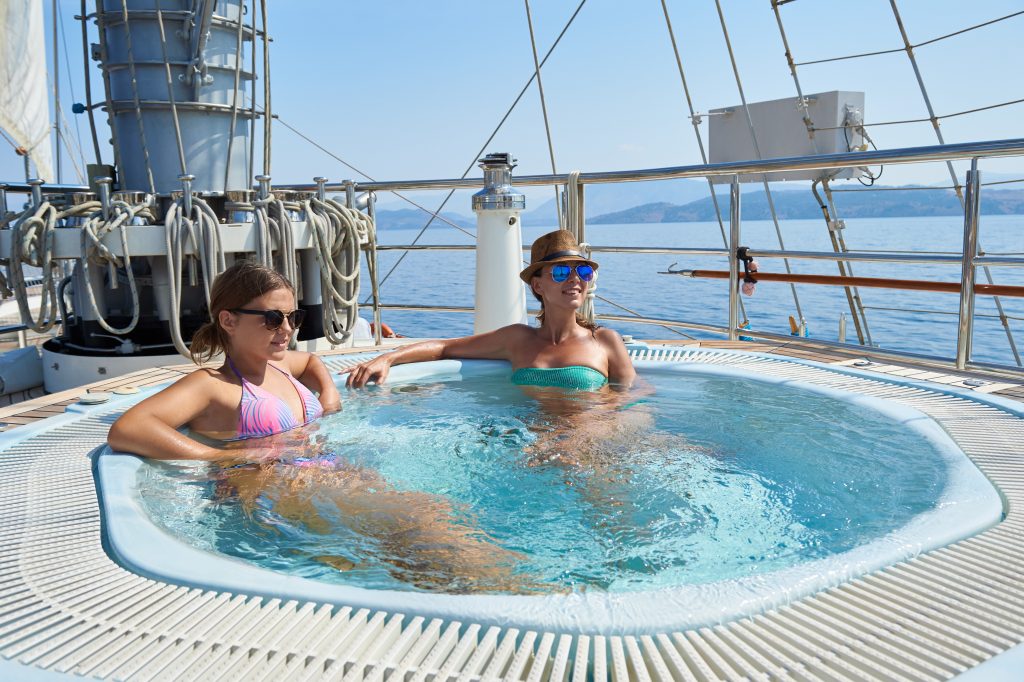 Running on Waves also has a hydraulic marine ramp from which passengers can swim and have fun with onboard water sports equipment.

Cabins on the Main Deck are larger, from between 172 and 215 sq. ft., and have double beds. These cabins open to the side promenades and have small windows and seating areas. Cabins on the Tween Deck measure 118 to 129 sq. ft. — some with double beds, some with twin beds — and have two portholes each for views. 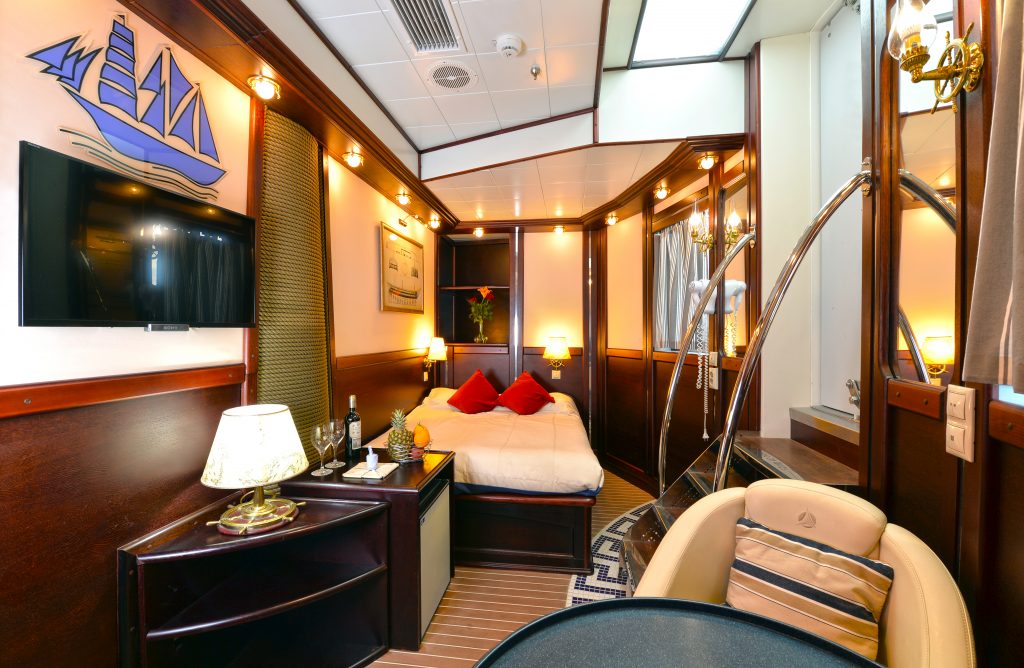 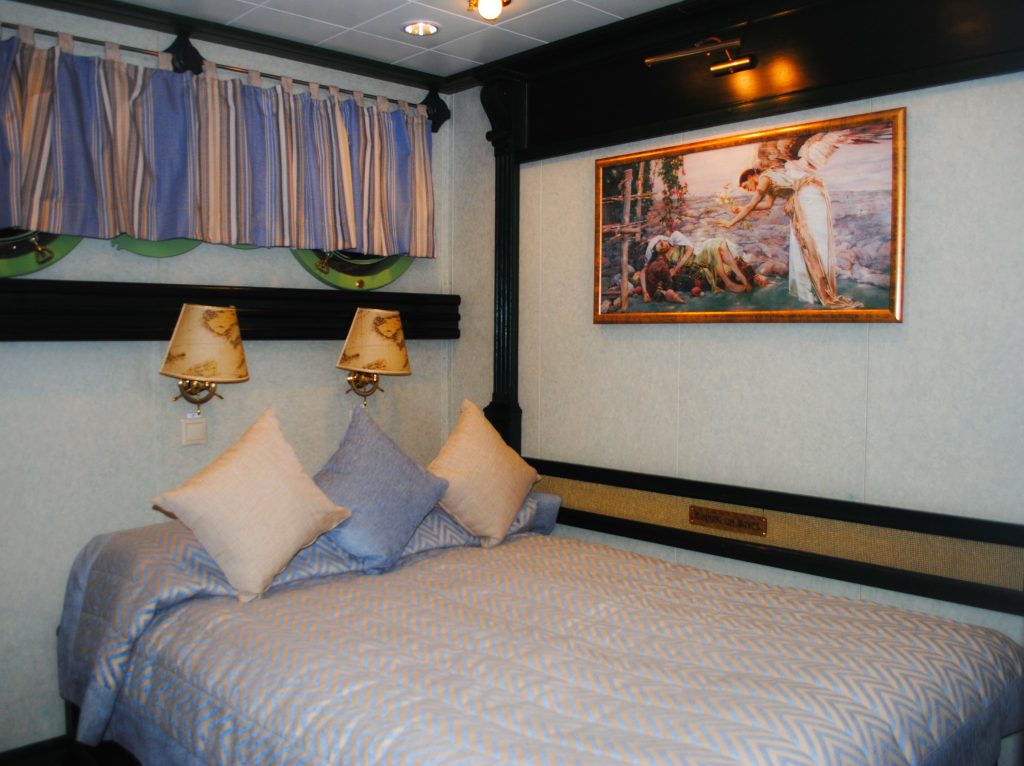 Here’s an overview of the Running on Waves experience, below:

Tall ship aficionados will find a wide variety of global itineraries offered from lines such as Star Clippers, Island Windjammers and Tradewind Voyages.

Contacts  for booking offices around the world are on the website. 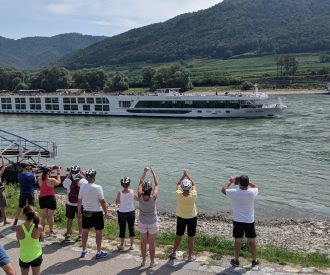 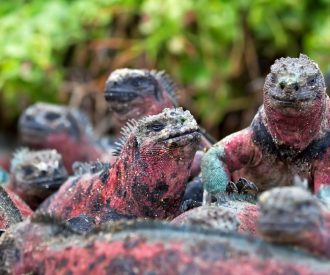