As the cruise industry has matured, ballooned in numbers, and focused on the bottom line, most lines have designed their ships to cater exclusively for two or more passengers occupying each cabin, leaving single travelers (who don’t care to share a cabin with a stranger) on the quayside unable to foot the higher price they must pay for solo occupancy of a two-bedded cabin. The penalty, and many see it that way, can be as high as a 100 per cent premium, in others words paying for both beds and using just one, or perhaps laying out clothes on the other to give it a thinly-veiled purpose.

Many ships once had dedicated single cabins with one bed; some large ships were built with a hundred or more. That’s all gone with the penchant to maximize profits. Building a single cabin with all the usual amenities costs almost as much outfitting a double cabin. Hand a passenger sole use of a double cabin, and that empty berth won’t be spending anything for all the revenue-generating extras that have become a big factor for most cruise lines: shipboard shopping, spa treatments, drinks, casino gambling, extra tariff restaurants, and shore excursions (aka money machines).

I traveled as a single passenger quite a lot before I married so I am well aware of the options that were once available and now are no more. I have several friends who simply stopped cruising because they could not afford paying the steep premiums.

Let’s see how all this grim news applies to the small ship industry. The extra expense of incorporating single cabins still holds true, with one exception. That second berth, other than its ticket price when sold, has far less value as an onboard revenue generating factor simply because many small ships include some features that you pay extra for on large ships (in some cases shore excursions and drinks) or they don’t offer them to begin with (shopping arcades, gambling, spa treatments, extra tariff restaurants).

So now you have read enough about the downside of traveling solo, here’s the good news: there are in fact opportunities to cruise without feeling you are being penalized every day you are aboard.

Let’s start with small-ship cruising in Canada and the United States. 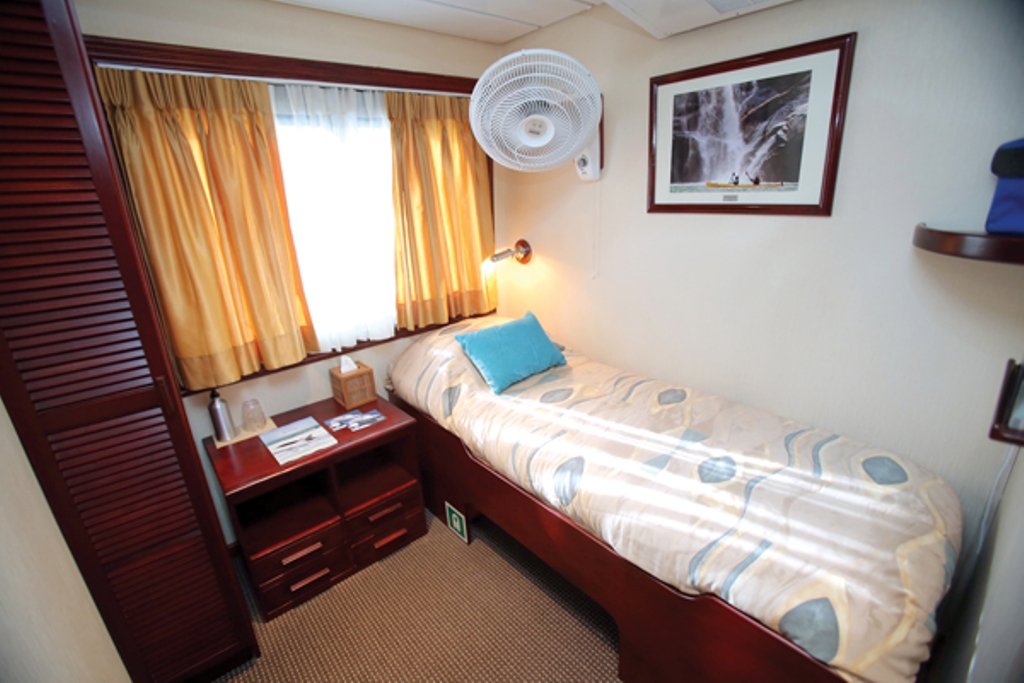 The world of North America is your oyster with American Cruise Lines (ACL) — we’re talking the U.S. East Coast, Pacific Northwest, Alaska, and the Mississippi River system. ACL has the most generous number of dedicated all-outside single cabins across its entire fleet starting from just two to six with the coastal fleet to 12 to 19 single cabins with the riverboats. Aboard the coastal Independence with six singles, the rate for a single with private balcony is just 12% above a double cabin with private balcony, while the rate for a single without balcony is almost par with a double. On the river fleet, the premium is 15% and that’s with a balcony.

ACL’s companion line, Pearl Seas Cruises, operates the 210-passenger Pearl Mist in the Great Lakes, along the coast of Eastern Canada and the U.S. and soon circumnavigations of Cuba. Single cabins, all with balconies and located on all cabin decks, are priced at a premium of about 45% above the lowest fare per person rate for an outside double with balcony. The premium charged here is closer to the norm.

American Queen Steamboat Co offers highly favorable single rates for its Mississippi and Ohio River cruises. For instance, a 9-day fall Upper Mississippi River cruise (St. Louis to St. Paul) has single inside cabins priced slightly less than the per person minimum-rated outside double cabins, while a single outside with open veranda is only slightly more than the AA per person double rate that includes a private veranda. AQ is also offering 2016 promotions that, because of the lower fares to begin with, add between 25 per cent and 50 per cent premiums, depending on the category booked.

Blount operates a pair of 88-passenger ships on the Great Lakes, along the St. Lawrence and New York State rivers and canals, in New England, along the Eastern Seaboard and in the Bahamas.

Its three outside singles on the Grande Caribe and Grande Marine, located on the Sun Deck with a single bed, sliding window and door opening to outside deck, are sold as 20% premium over the per person rate in a double cabin on the same deck, and a 55% premium over the minimum per person rate. Additional doubles may be sold as singles, when available, and the premium varies depending on the double cabin demand for a particular sailing.

Blount also offers a “Willing to Share” program where you may pay a per person rate for a double occupancy room by wait listing for a same-gender traveling companion. If none emerges, you will get sole occupancy of the double cabin at the share rate.

This line lists rates for single occupancy on many of its cruises. For example, Un-Cruise Adventures‘ Safari Explorer’s rate is the same as a per person rate for a Captain level double; for the Safari Quest at Commander level; and for the Safari Endeavour, at the Admiral level. For the S.S. Legacy on the Columbia and Snake rivers, single rates are available for four Master cabins, outsides with a double bed at a 30 per cent premium to the double occupancy rate for these cabins.

Lindblad operates the 62-passenger Sea Bird and Sea Lion in Alaska, along the Columbia and Snake, and in Baja California. Single rates for an outside twin-bedded double cabin with window are sold at a 50 per cent premium for Categories 1 (the minimum rate) and 2, a standard outside double.

Up in Canada, Ontario Waterway Cruises charges a 75% premium over the per person double occupancy rate for sole occupancy on its 32-passenger Kawartha Voyageur. There is but one single cabin, and good luck trying to get it.

Operating the 64-passenger Canadian Empress, St. Lawrence Cruise Lines also charges a 75% supplement over the per person double occupancy rate and at times drops it to 60%. Cabins 1, 2, 5, 6 and 20 are sold at 50% supplement.

Alaska Dream Cruises lists no single cabins or single rates on its website, so you will have to contact the line directly and ask. The same goes for Marine Link Tours operating a tiny 12-passenger cargo carrier along the British Columbia Coast.

Keep in mind, if you are flexible with your departure date and learn of a sailing that is not selling well, you may be able to have a double to yourself at the per person fare, otherwise it leaves the dock empty. Maybe you have a friend who would like to come along, so that’s two cabins booked that would have gone empty.

Now go to the reviews for the lines mentioned above and see what appeals to you.

Stayed tuned for a future feature to cover river cruises in Europe.