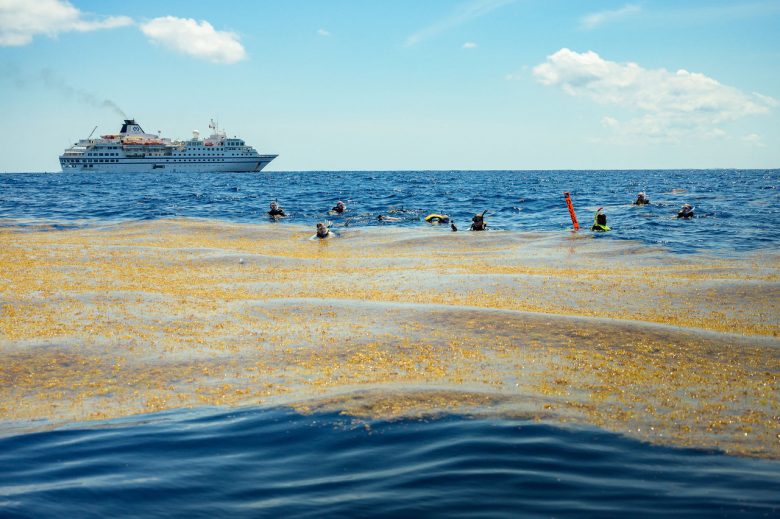 As anyone who has sailed on a small or quirky ship knows, a sense of community and shared experience is one of the biggest joys of being onboard. With the idea to foster that communal spirit, One Ocean Expedition’s 146-passenger RCGS Resolute was transformed from expedition cruise ship into a floating summit recently.

On board was a diverse group of key influencers and corporations came together to address the increasing problem of ocean plastic. 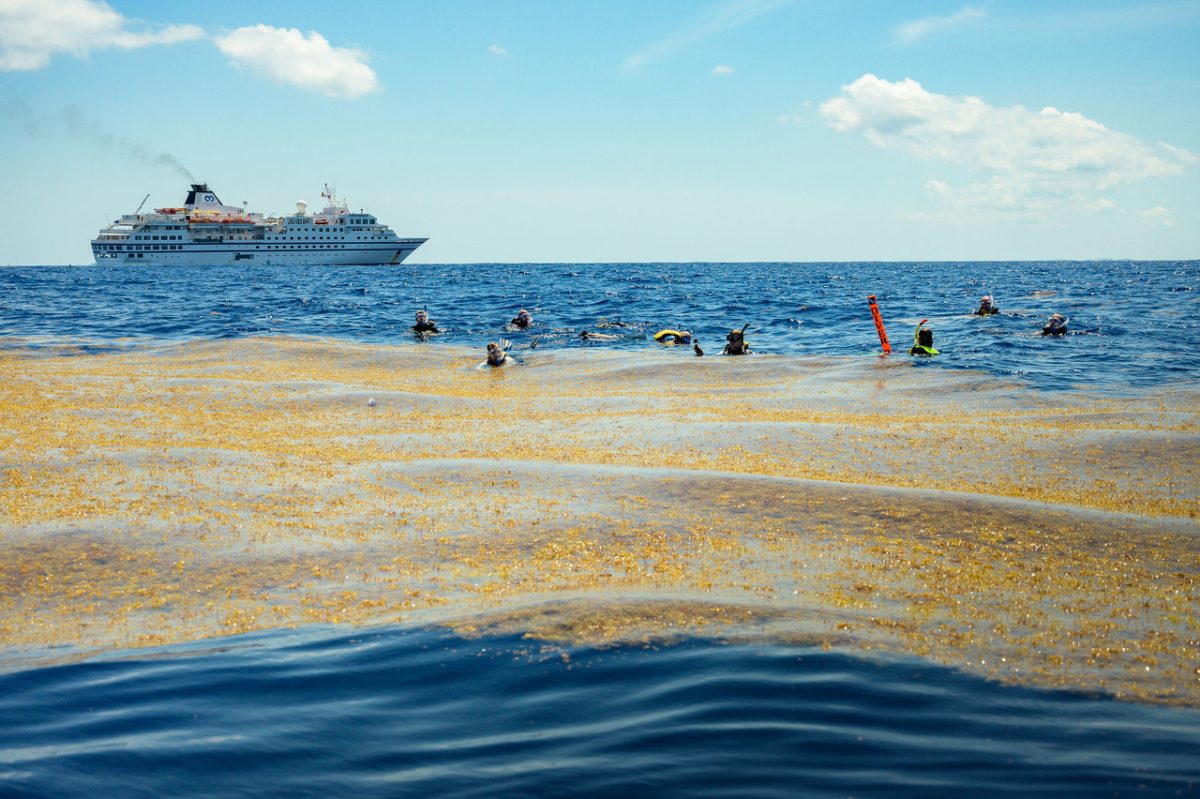 The 146-passenger Resolute was the base for the first ever Ocean Plastic Leadership Summit. * Photo: Bryan Liscinsky

Attendees spanned the entire spectrum from large corporations such as Dow, Proctor and Gamble, and Hasbro; NGOs (nongovernmental organizations) working to reduce plastic consumption; waste management organizations that collect and recycle plastics; and artists and activists. 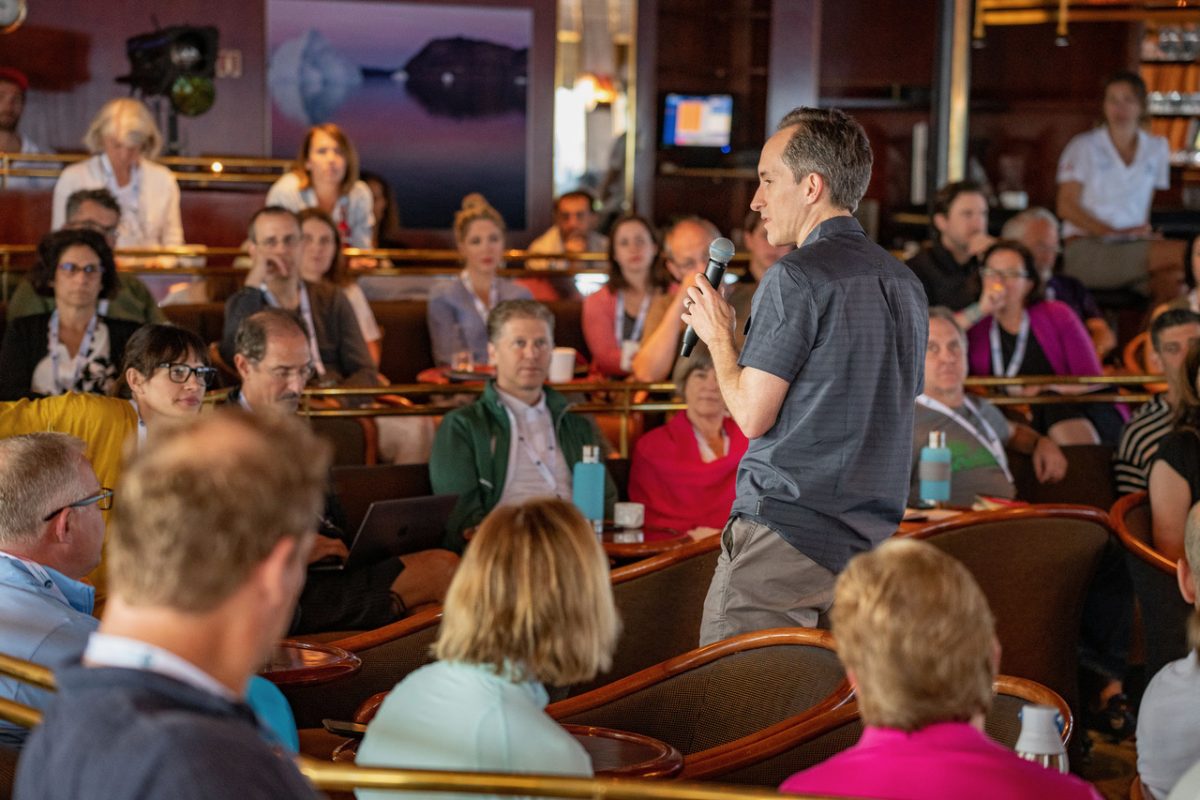 Attendees at the 4-day conference at sea represented stakeholders across many sectors. * Photo: Bryan Liscinsky

Media, including National Geographic and Outside magazine, were also onboard to cover the expedition.

The summit began with a beach clean-up on one of Bermuda’s beaches that, at first glance, seems pristine. Digging closer, however, participants found a plethora of small “micro” plastics that littered the beach and were embedded in the washed-up sargassum. Large pieces of plastic were also recovered, as well, such as a 50-gallon plastic drum that had to be dug out of the sand.

Sailing into the Middle of a Gyre

The next morning, Resolute sailed out of Bermuda and into the open Atlantic. We cruised right into the middle of the North Atlantic Gyre, one of the world’s five main gyres (or vortex)  where plastic tends to accumulate due to ocean currents.

After a morning session hearing from various stakeholders, the expedition capability of Resolute was put to use. All 160 participants were able to take to Zodiacs in the middle of the Atlantic Ocean and go snorkeling on a large patch of sargassum in almost 8,000 feet of water. 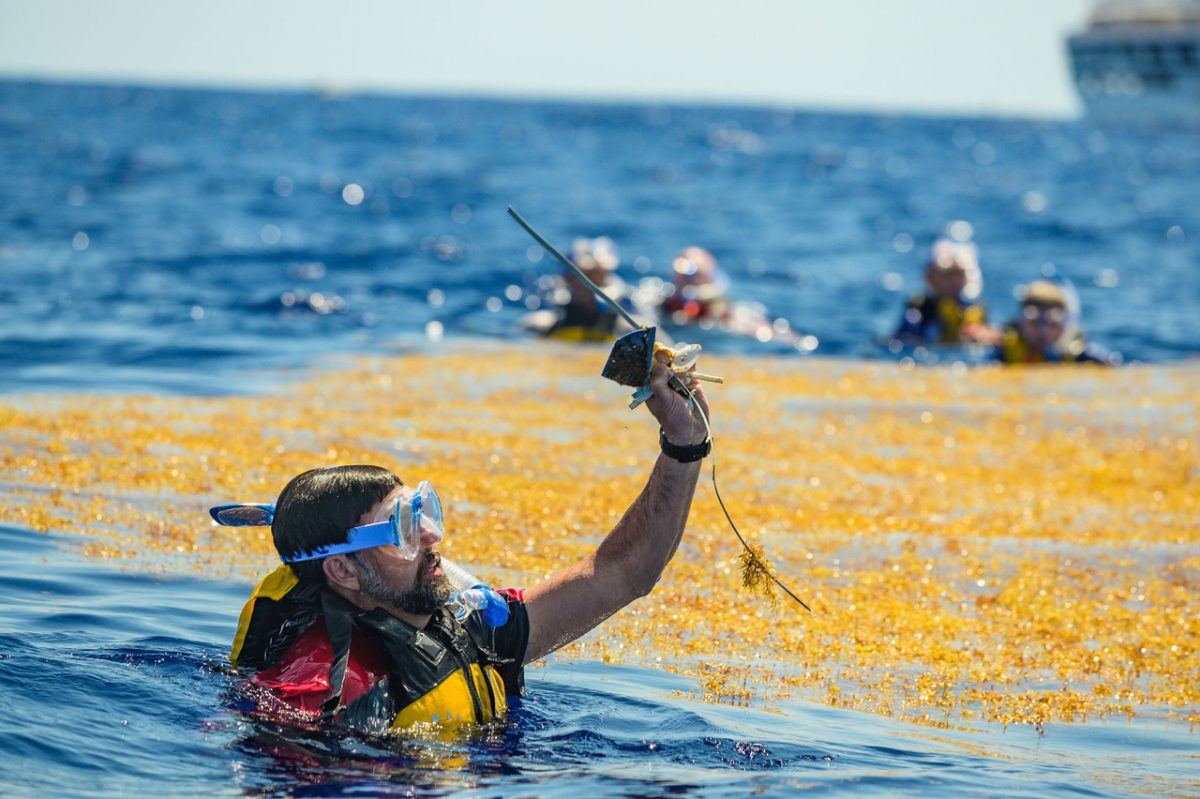 The group snorkeled around a large patch of sargassum in almost 8,000 feet of water. * Photo: Bryan Liscinsky

Seeing firsthand what was floating just at the surface in and around the sargassum in this one stretch of ocean was startling. The common perception of these “garbage patches” is perhaps a bit inaccurate — the ocean still looked pristine from the Zodiacs. However, once we were in the water snorkeling, large pieces of plastic were quickly recovered — a toilet seat, a speaker, several cups, toothbrushes and more. 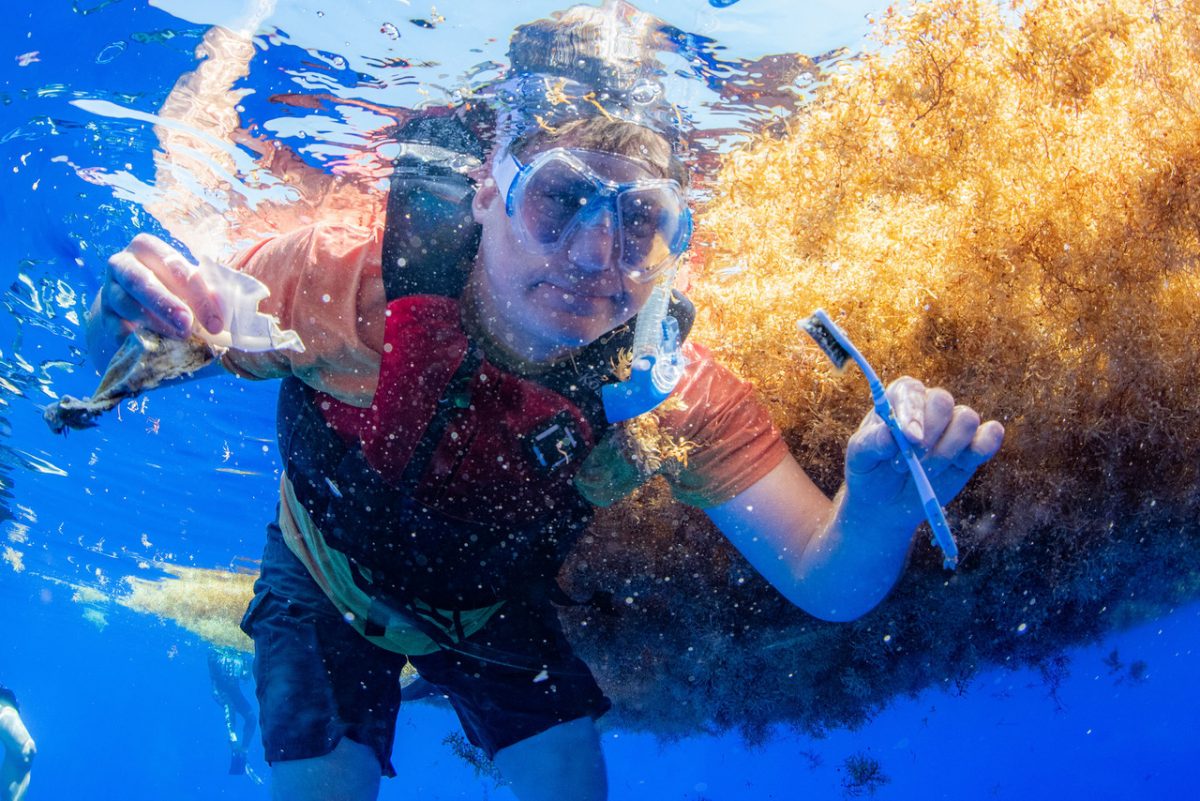 The group found toothbrushes floating around the middle of the Atlantic Ocean. * Photo: Tom Gruber

And it was evident how numerous the microplastics were. One participant described it as a “plastic smog.” Trawling for microplastics was also conducted by several Zodiacs, and an onboard lab dissected locally-caught fish to examine the presence of microplastics in the food chain. 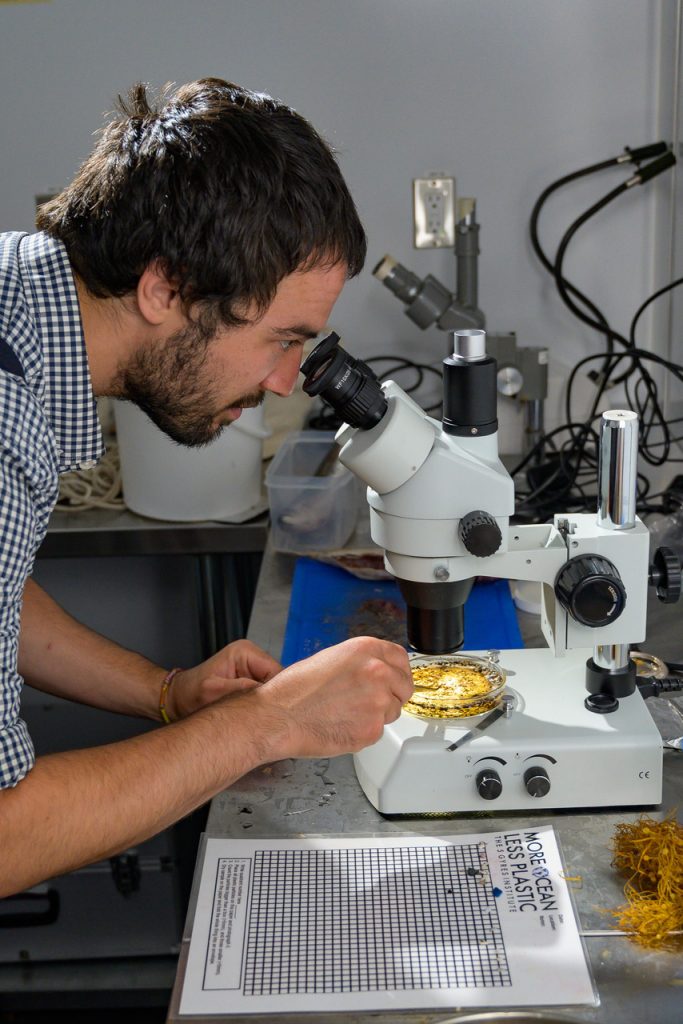 An onboard lab dissected locally-caught fish to examine the presence of microplastics in the food chain. * Photo: Bryan Liscinsky

Throughout the next two days, Resolute sailed the waters of the North Atlantic as participants broke into working groups throughout the ship — some in the lounge, some enjoying the beautiful weather by electing to work on deck — to tackle the challenges in their respective fields.

The unique location of having everyone together on a ship — whether enjoying a BBQ on deck or stepping into a Zodiac — allowed participants with very different perspectives to engage directly in a way that a normal conference could never achieve. 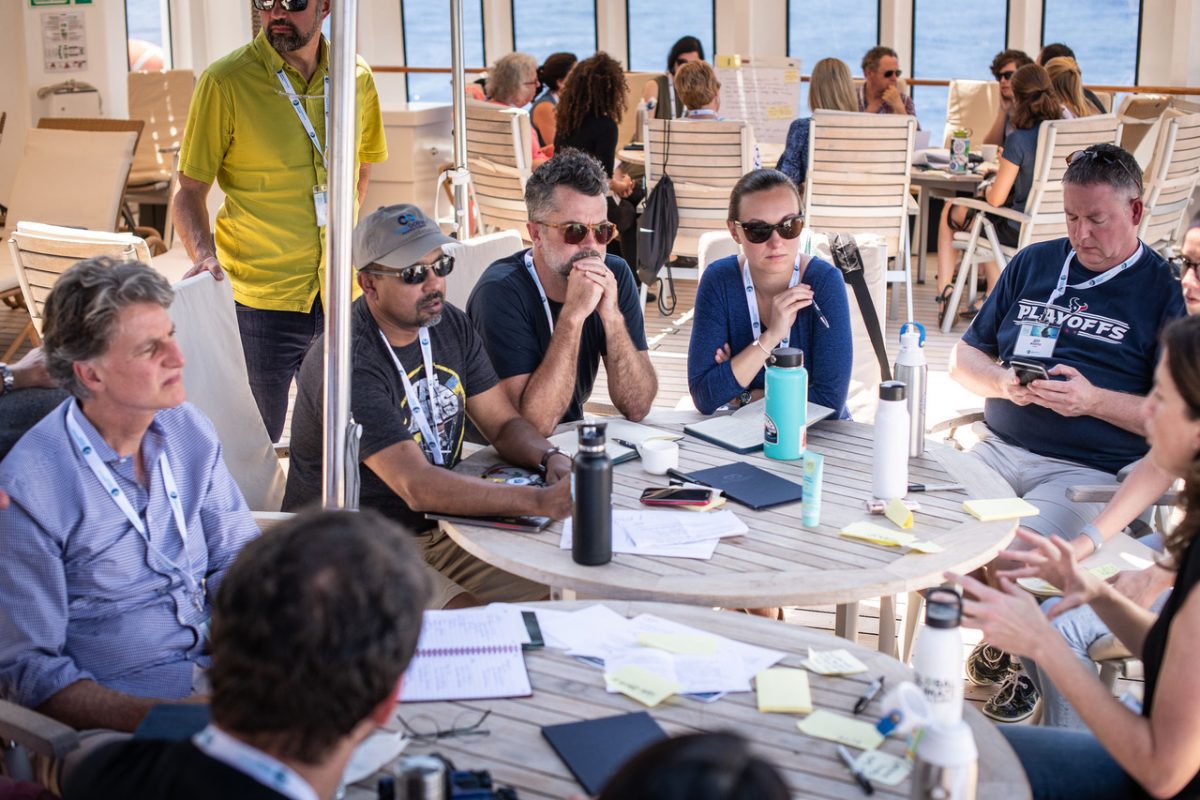 The Resolute sailed the waters of the North Atlantic as participants broke into working groups to discuss solutions and strategies to the scourge of plastic waste. * Photo: Bryan Liscinsky

At the end of the expedition, numerous pledges were made and roadmaps laid out. Collectively we also presented 30-, 60- and 90-day plans for review. And most significantly, dialogue is now ongoing and energized.

There are already plans for a similar summit to follow up on the success of this year’s expedition.