I am in the beautiful city of Basel, Switzerland, the headquarters of Viking Cruises, for the naming celebration for seven new river boats on March 19. The sweet sounds from a trio of alpenhorn players surrounded by red and white balloons and flowers summoned the commencement of formalities on the top decks of two connected new vessels, Viking Sigrun and Viking Einar. 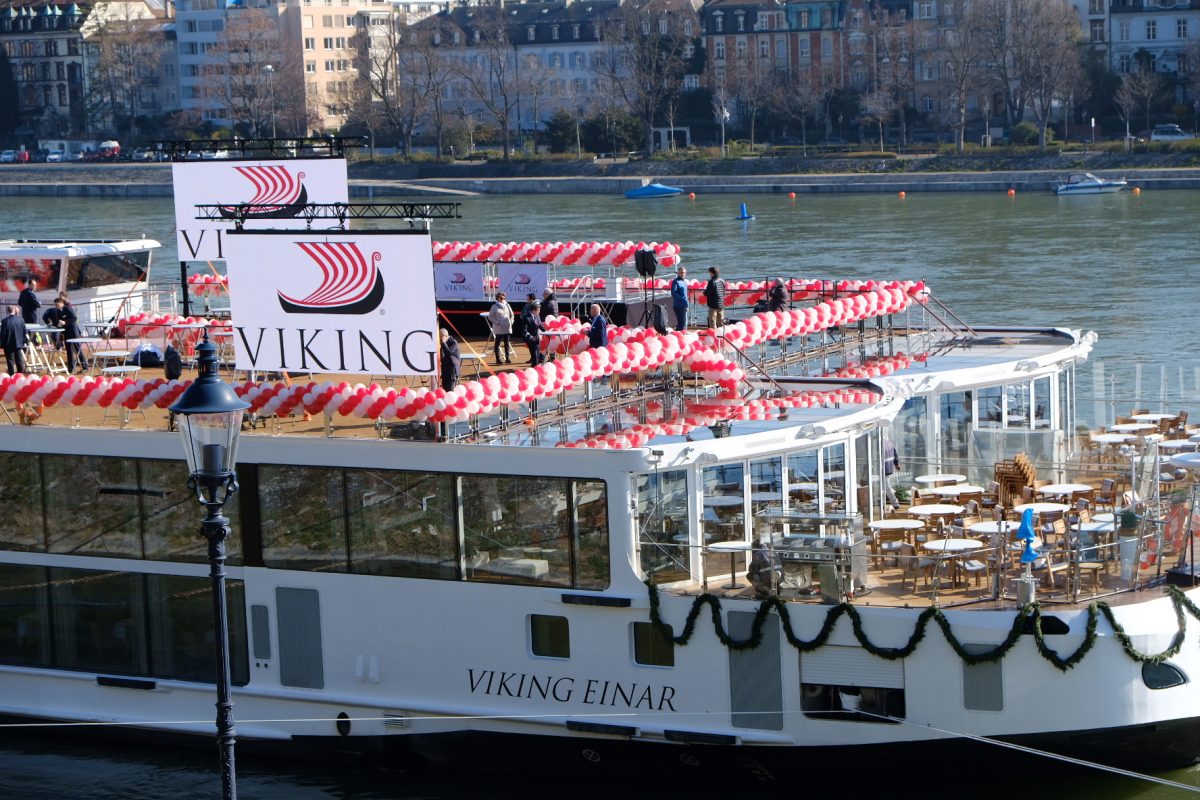 The Viking Tir and Viking Vali were named in Brusbuttel, Germany, while Viking Sigyn and Viking Ullur were named in Rostock, Germany — all six carry 190 passengers and are referred to as “Viking Longships.” The smaller 106-passenger Viking Helgrim was named in Porto, Portugal.

With vessels in Switzerland, Germany and Portugal, the naming ceremony was done by connecting the boats via satellite across four European cities. We watched on large video screens near the main stage up on deck. 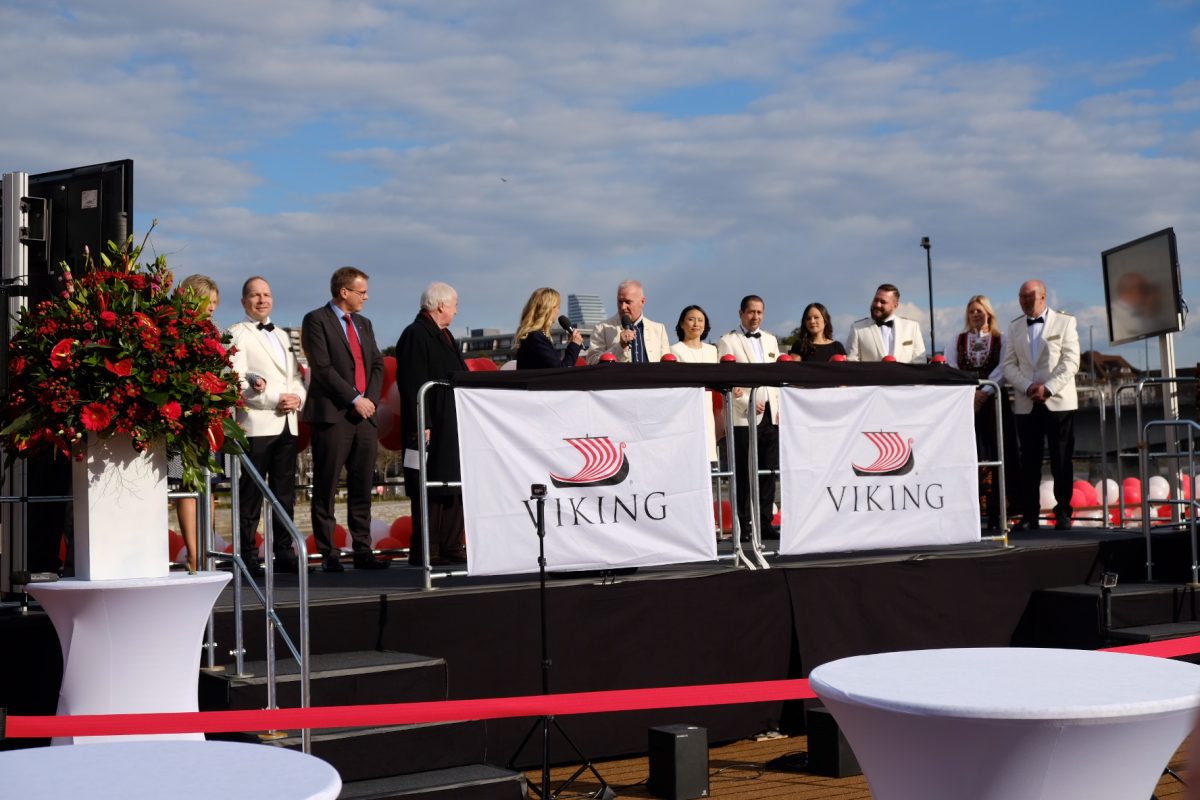 Attending the naming were Viking cruise staff and crew from around the world, many in uniform, joined by journalists, travel industry representatives and invited guests. Six of the women honored to be the boats’ godmothers were all distinguished Viking employees; the seventh was the wife of a Viking executive.

One by one they stepped forward for the naming of their ship, to say with great pride, “May your passengers and crew always be safe and may you always have a hand’s width of water beneath your keel.”

With the push of button, a bottle of Norwegian Gammel Opland aquavit was released and broken on the bow of each new vessel. 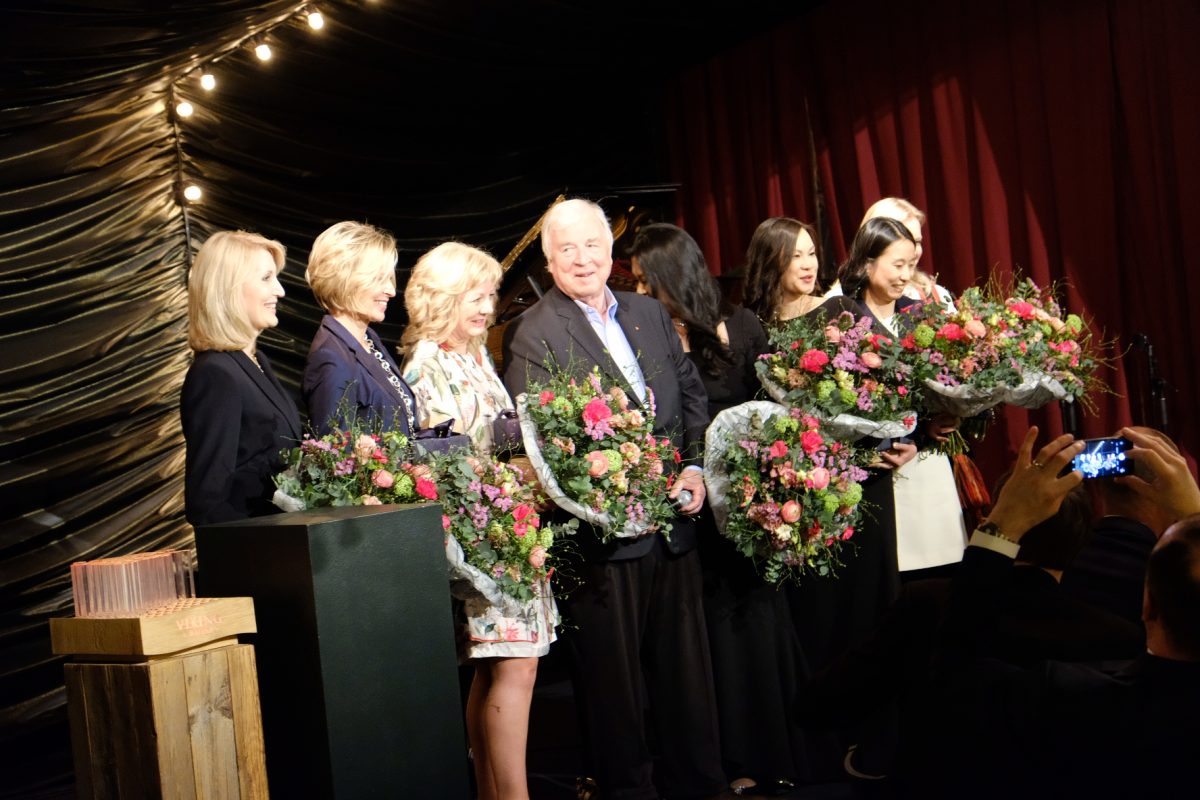 Chairman Hagen and the 7 godmothers of the new vessels. * Photo: Judi Cohen

The festivities continued at a gala reception and dinner nearby at the renowned Swiss art museum, the Beyeler Foundation, where we eagerly viewed the celebrated exhibition “The Young Picasso – Blue and Rose Periods.” 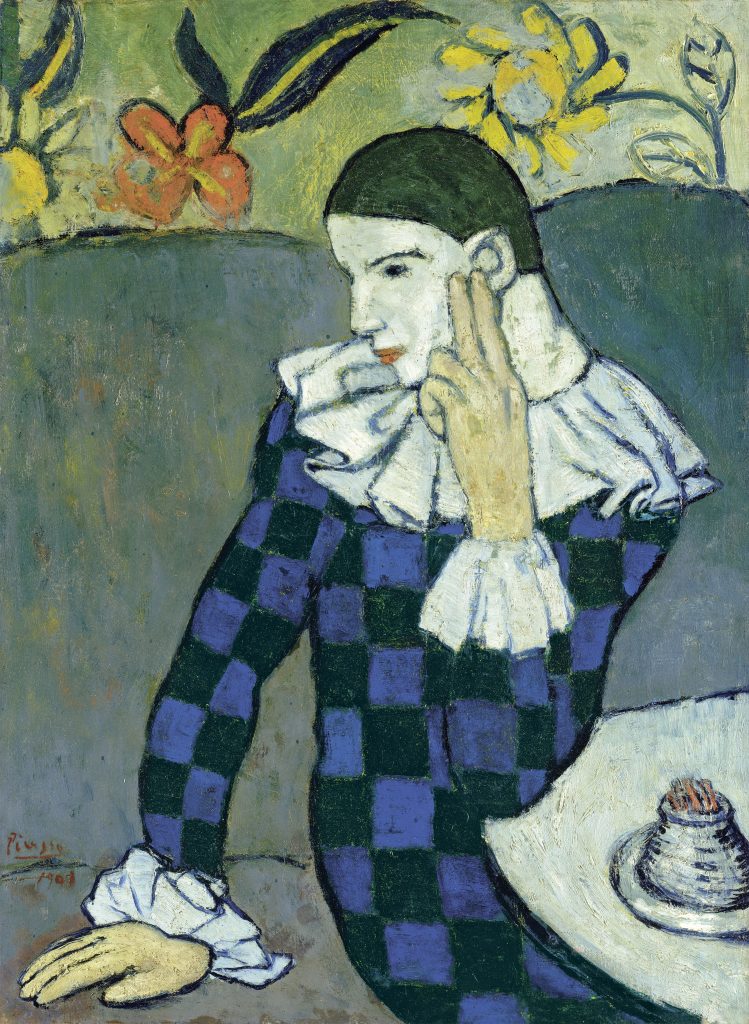 There were presentations and a brilliant performance by Alma Deutschmark, the 14-year-old composer, violinist, pianist and child prodigy, who is a favourite of Viking Chairman Torstein Hagen.

At a press conference earlier in the day, Chairman Hagen smiled and said, “We don’t have a lot of news, we’re a little boring with no new bells or whistles.”

However, in the next breath he affirmed Viking Cruises’ astounding growth.

The river fleet is expected to continue to grow from 72, with yet another seven river cruise vessels under construction. Plus, six more oceangoing ships are under construction, to join the current six, with four more under option.

Hagen said, “this does not include the expedition vessels that are under construction in Norway … and we won’t say a lot about them; at some stage we will.” 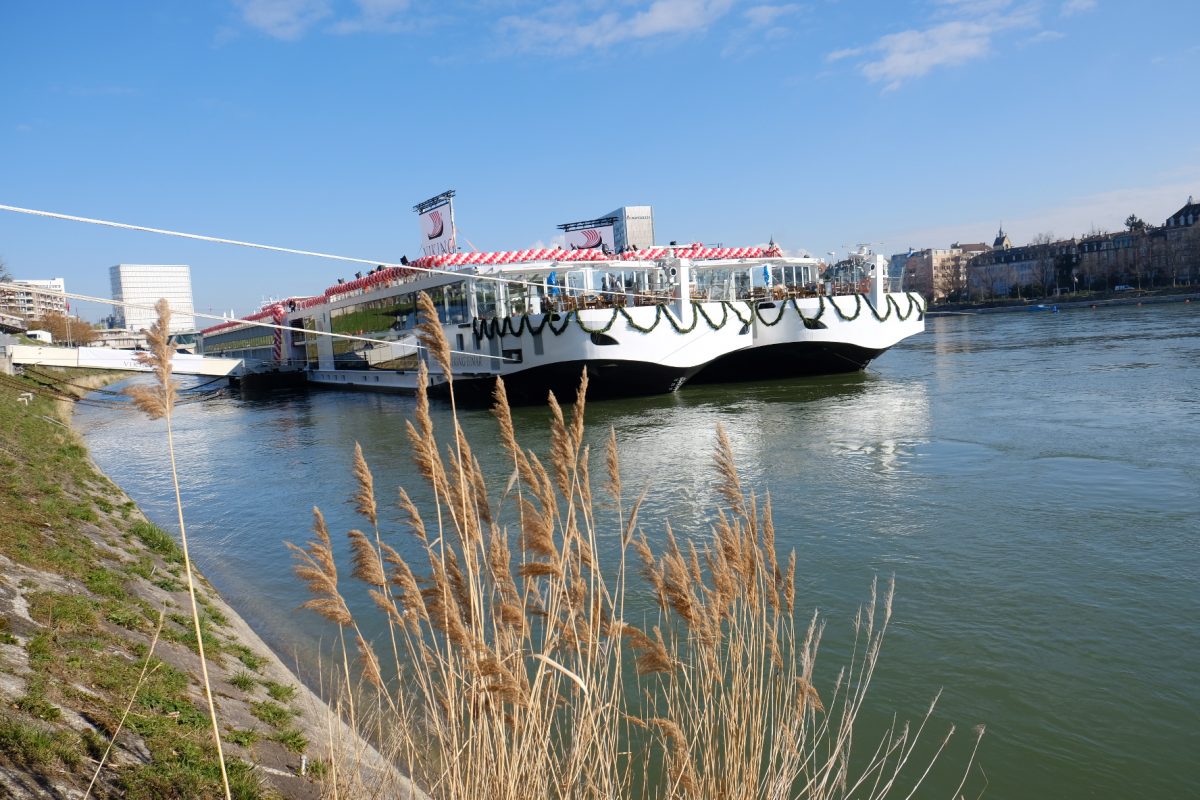 During his presentation Hagen reflected on the word luxury.

“I have outlawed the use of the word luxury. When you are on a river vessel, and you compare it to others, make your own judgement and look at all the details. I think we are elegant; we are hopefully understated and hopefully timeless.”

He went on to say, “we don’t take great pride in having various designers for various ships. We believe that when we get it right, just repeat it.”

In a conversation following the naming ceremony with Ms. Karine Hagen, Viking’s EVP of product, Viking Cruises board member, and daughter of Chairman Hagen, she beamed with passion and warmth as we talked about how impactful travel can be. 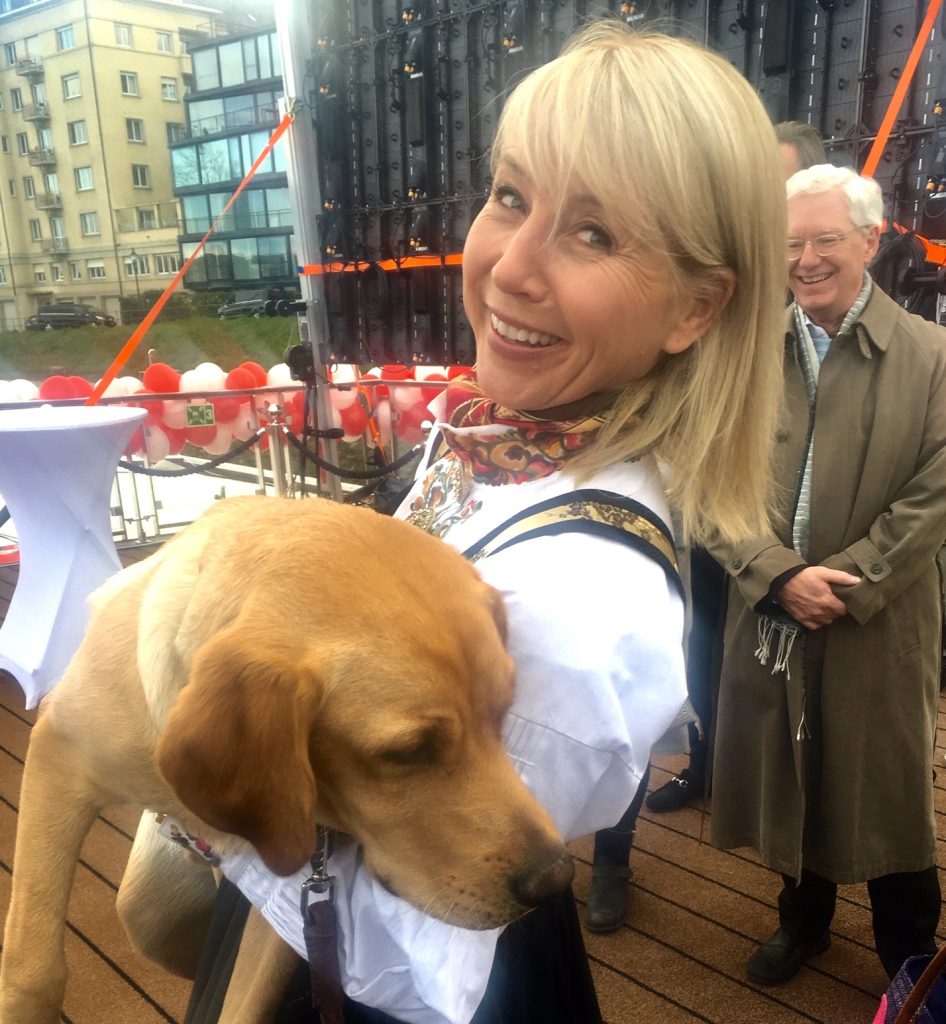 Viking’s Karine Hagen with Charlie, the puppy of her beloved lab Finse who is the subject of Hagen’s series of travel books for children, “The World of Finse.” * Photo: Judi Cohen

Ms. Hagen explained about how coming aboard a Viking cruise provides opportunities for education and immersion. Guests can take in local life experiences , learn how local economies work, and enjoy exclusive privileged access at venues such as Downton Abbey, Oxford and Highclere Castle, Lowenstein Castle and the Hermitage to name just a few.
“Our industry can do a lot of good. Travel has the power to make the world a better place,” she said.
With Viking’s head office in Basel, the next morning we also had the opportunity to visit the headquarters. Designed to look like the Viking fleet, with the Scandinavian light woods, Klinker furniture, and open glassed-in rooms and offices, the work environment is in keeping with the brand. We also visited the staff restaurant to see how new recipes are “auditioned” before introduction on the various ships.
All in all, I enjoyed a most appetizing first-taste of Viking’s newest river vessels.

➢➢Watch this space for a longer feature on Judi’s mini Rhine cruise aboard the Viking Einar. 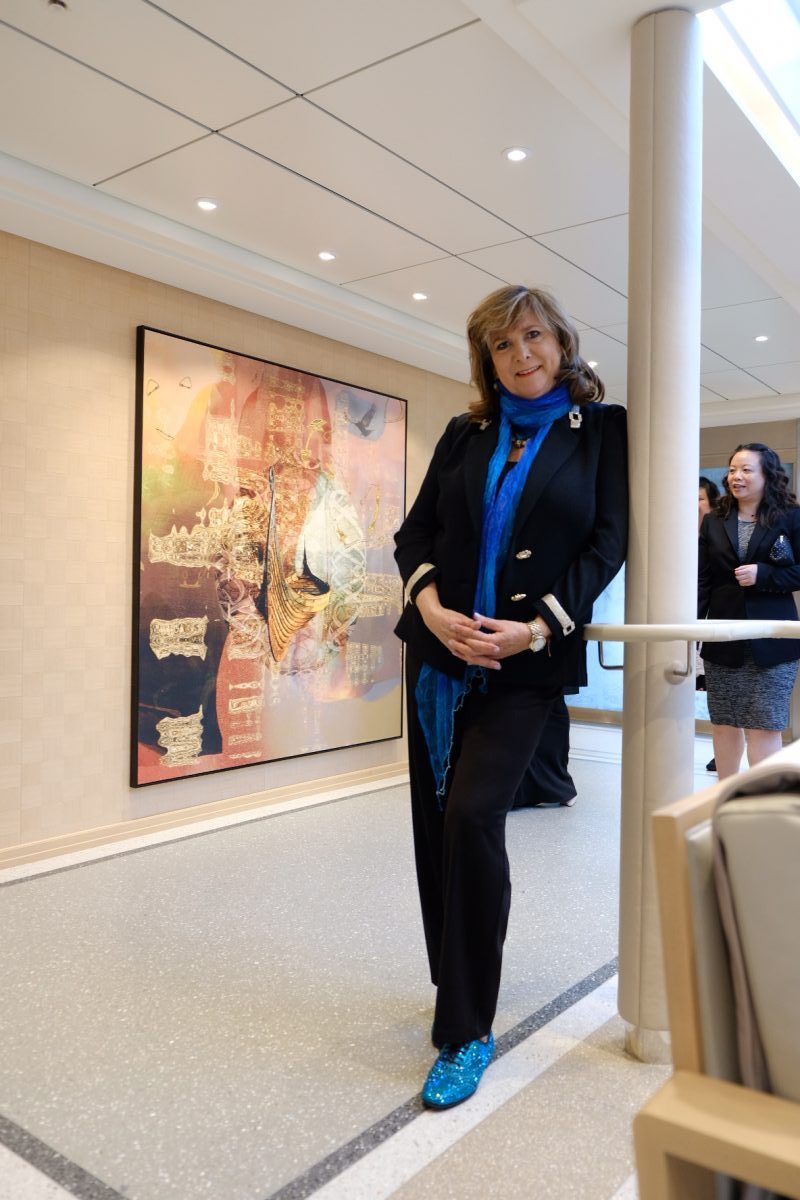 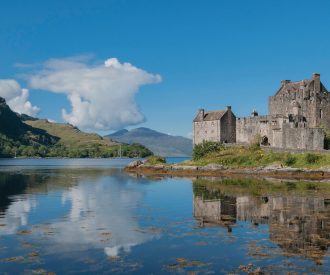 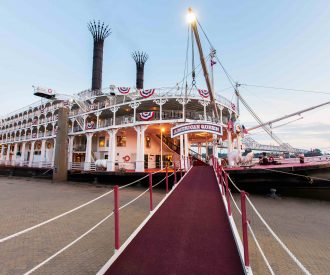